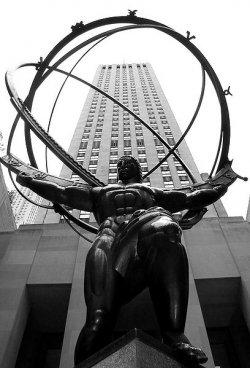 I’ve been reading Atlas Shrugged, Ayn Rand’s epic novel that has become the spiritual guide for the likes of Rand Paul and Paul Ryan. They, so we understand, have made it required reading for their staffs.

I’m only about half way through (it’s over 1,000 pages), and I can already tell that anyone who thinks this is some kind of model of how to run a country is, well, not exactly playing with a full deck.

Ayn Rand was an immigrant from Russia, and pretty much that’s all you need to know. Her thinking is utterly shaped by her hatred of Communism and those who brought it upon the earth–the intellectual elites in the form of “progressives.”

Her heroes in the book are all brilliant industrialists, those who work because they  see the only virtue as being the quest to create. It is the purpose of existence.

Juxtaposed against them are the progressives, those who teach and those who are not capable of creating. They pursue as their virtue love of humanity and the need to help one’s brother.

Where it all goes horribly wrong is in the extrapolations. The good guys are perfectly good and the bad guys are perfectly bad. It gets down to even sex. For the good guys sex is a million fireworks going off at once as to perfect people unite in creative glory. For the bad guys, sex is that dirty little animal drive reserved for faceless men and women in back alleys.

In a nutshell, Rand creates draws out the pitfalls of the nanny society to such absurd extensions and the glories of unbridled capitalism to inhuman heights, that they ultimately are laughable. That anyone could take this as a serious likelihood worldwide, is indeed quite juvenile in their thinking. Indeed, they are incapable of anything resembling critical thought.

The fact that most philosophers have rejected her theories of “objectivism” relying on utter reason as the basis for all knowledge, and her belief that only a pure laissez-faire capitalism can protect individual rights, hasn’t stopped those who champion her cause. Of course it is a rather convenient excuse for corporate greed. And surely she would have nodded at Gecko’s shout: “Greed is good.” She promoted selfishness a proper and “good” thing after all.

Ironically, she was very much against religion of any kind, finding it failed the “reason” test. I say ironic because today her most ardent supporters are the know-nothing TeaNutz®. A healthy percentage of them are also ultra right-wing Christianists who wish in the end to form a theocratic state modeled after their strange interpretation of the bible. Ayn would have shuddered and be repulsed by such notions. Given that the average TeaNutz® imbiber has neither read Rand nor has a clue of anything she wrote, this is pretty understandable. You can imagine that the GOP elite is not rushing to inform them either.

She would have whole-heartedly endorsed the idea of calling industrialists as “job creators” since she found workers as parasites, necessary ones to be sure. Among her friends and presumably fellow travelers is one Alan Greenspan. Other admirers are Mark Cuban, owner of the Mavericks and John P. Mackey, owner of Whole Foods.

It is not hard to extrapolate from her portrayal of the wealthy as the true “victims” of society to the idea that it is a near-religious sin to think of taxing these superior folk. That is essentially the Republican mantra. After all, they are the fountainhead (pun intended) of the successful state.

I have to admit that I am enjoying the read. I love tomes (I read Aztec for god’s sake!), and this one is about par for the course, wildly boring in spots, full of soapbox rhetoric that passes as “conversation” and a plot that is fairly obvious. I am about half way through and long ago “guessed” the outcome. Still, the characters are interesting and like I said, I like these kinds things. (I’ve also read War and Peace TWICE.)

Still, reading the book or even reading a Wikipedia bio on Rand explains a good deal of what would otherwise be inexplicable regarding the GOP. What is amusing most of all is that the silly TeaNutz® continue to have no clue. It is quite clear that the GOP elite neither cares nor is interested in pursuing the social aspects of the trailer-livin’ right. They are prepared to give lip service and that only. Rand was in favor of abortion rights, she had an open marriage, and she as I said, had no use for religion whatsoever.

Much of the “shadow” GOP feels the same. This is simply about money, and making sure that money goes to the right place and thus power is retained where it should be. The little folks are just to be patted on the head, thrown a crumb or two once in a while, and assured that “efforts are being made” to effect a moral government based on the bible. To the degree that a number of them feel that this is “ordained” by their unique interpretation of the bible, that is well, gravy.

I don’t say read the book. You may not have the fortitude to sign up for that long a haul, but do at least familiarize yourself with its basic outline and the life of its writer. And do pay a bit closer attention to those who promote this science fiction as “where we are headed” if a certain black man continues to guide the ship of state.

15 thoughts on “Know Thy Enemy”