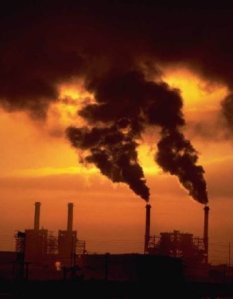 Probably one of the most stupid (blindingly stupid) and callous remarks I ever read, was a old high school classmate of mine who in her uneducated “wisdom” explained that we need not worry about the environment because God had promised in Genesis that the seasons would go on without change for all time.

Of course this kind of idiotic rot can be laughed at as but the illogical babblings of the hopelessly ignorant and uneducated, but sadly, these same moronic individuals assume their civic duty and vote without fail–always for other dead brained folks like themselves.

And therein lies part of our paralysis in actively working to undo the horrific damage we humans have inflicted on Mother Earth. The other part of course is the power of the corporate world to fund “studies” which are interpreted in a manner as to distort the findings to support their continuing right to pollute.

This faux science is then funneled back to the dough-brains who cling desperately to their only security (they think) in life, the King James version of the bible. All nice and tidy. The circle is complete.

I read yesterday that continuing studies about anxiety suggests that the most anxious people are more inclined to the fanatical (fundamentalist) forms of religion. In other words, the more insecure you are about the world about you, the more you are inclined to extremist forms of religious belief, those that offer perfect answers to all questions.

We all, as we’ve discussed before, are much inclined to seek out and read those who agree with us. We might dabble a bit with those that don’t for a while, but we grow weary when we realize that we are changing no minds, and return to our havens of folks that agree with us.

A while back, Climategate occurred and the wacko right went wild. “SEE!!! ” they screamed, it was all a lie. Of course there is never much explanation as to why scientists, who live to be vindicated as discoverers of new truths, would be in such a conspiracy of lies. This idiotic argument is made about the age of the earth and about evolutionary biology as well. Of course, it’s a blanket statement never actually argued in depth, because it is beyond any common sense to argue that MILLIONS are so engaged in subterfuge and have been for more than two centuries. You have to figure that somewhere, someone would spill the beans.

Back to Climategate. An independent study has found that the the scientists involved with “doctoring” the publicized information were honest and that their actual data was good. Just a case mostly of trying to hush the critics who were in fact not willing to either hear or report the truth. That doesn’t excuse the behavior surely, but it is understandable. It simply gets tiresome having to defend against deliberate obfuscation by big business or those in their pockets, when desperate times are upon us.

It just happens that I’m reading a paper right now in The Anglican Theological Review on environmental issues and the bible. Some are working on a theology of ecology, and I found some of the findings quite extraordinary.

Surely a good case can be made that God’s covenant is with his creation, not just human beings. The Domination theory of stewardship has long been questioned and is not followed by any but the religious right these days. It is clear that God loves all that he created, humans included, but that we have no especial favored place. (Job 39:9-10)

Today, scholars see the early Hebrews as understanding the world as one of interconnectedness and interdependence. Nowhere is this more clear, and our guilt over what we have done here than in Isaiah 24:4-6a:

The earth dries up and withers,
the world languishes and withers;
the heavens languish together with the earth.
The earth lies polluted under its inhabitants;
for they have transgressed laws,
violated statutes,
broken the everlasting covenant.
Therefore a curse devours the earth,
and its inhabitants suffer for their guilt.

The words ring true, and chill to the bone.

Writer, Rev. Martha Kirkpatrick, sums it all up for us:

“. . .we may say that our salvation depends on our understanding that God’s covenant includes all flesh; humans and all creation are radically interconnected and share in the same blessing and judgment; and that for humans to see ourselves as the center of everything is supreme arrogance and misses the point.”¹

This all written before the latest ecological disaster in the Gulf. I sit here, sun shining, but a few feet away, water courses through the grass, moving downhill. The monsoons hit against last night, dumping another inch or more. We have no doubt fulfilled on July 8, the entire month’s normal allotment of rainfall.

In places in Iowa, once again, people look upon flooded roads and homes. The toll economically to say nothing of the psychological pain, is incalculable. And we are not alone, for such is happening in parts of Texas. It happened in Tennessee, and parts of the Northeast earlier in the year. Flooding.

The fools don’t get it, or don’t want to get it. The sounds of “Global warming? You gotta be kidding-we haven’t had this much snow and cold in years!” echo in my mind, along with the snotty laughter. Can you claim to know ANYTHING about the subject and make so egregious an error in speaking?

Perhaps this is but a minor thing. One of those years long, or decade long blips, and things will return to normal. It’s been three years, not long I agree in geologic terms. But whether what we are suffering in America and around the world these days is but a cyclical adjustment, or the beginning of the predictions matters not, for the science is real–and all but those who have a reason to not believe, know it.

God has a universe to nurture. If the earth’s inhabitants decide they don’t care to share in the future, then God will allow us our will. Pity. It was such a beautiful planet. And after all, he did care for us enough to try through his incarceration but 2000+ years ago, to help us get it right.

Pity indeed, that we do not listen.