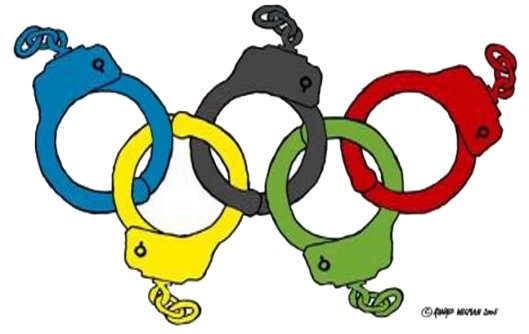 Since the very title is a presumption, it seems right and logical that we do.

So bear with me.

Okay, so perhaps we are not so sure of those things, but the ideals are what we are after here, and those are certainly the ideals of Olympic competition, along with brotherhood, the international symbol for ma and apple pie, and the general touting of human excellence, there having  been no Nobel’s or Oscar’s or Pulitzer’s at that time.

So of course we realize that all has gone terribly wrong in the ensuing millennia.

Today the Games are a nationalistic entertainment extravaganza wherein somehow one country is judged better than another by virtue of how it schemes to “help” its athletes win while still not getting caught for cheating. All kinds of political points are scored, lost, won, and wasted in the pursuit. Of increasing concern is the degree to which polluters, human rights violators, and countries unable to feed their own masses somehow manage to sweep, cover-up, board-up, or wall-off, these embarrassments  while “hosting” these circuses.

Everyone waits with bated breath, (whatever that actually means) to see what Vlad Putin and his “nipples on display” ego has in store for gays and other dissidents once all the lovely people have gone and Russia returns to its cold, stark realities. We politely have looked the other way “for the sake of the athletes” and most of us will sanctimoniously report that his “opening and closing” paled in comparison with Beijing’s and even London’s.

Meanwhile a half-dozen impoverished countries will bid for the right to use dwindling resources to build venues which often go unused once the games are over, while poverty haunts the senses within blocks of these palaces of extreme waste.

So if I were handling things, this is what I’d do:

a. If you want to be a “sport” no bowing  is allowed. Conclude your effort and wave to the audience and depart.
b. Everyone will complete the same exact “routine”.
c. Athletes will wear appropriate clothing and not appear to be characters in a story.
d. Standards will be developed for each “part” of a routine, and graded on a scale of (1)completed satisfactorily (2)
completed but not cleanly so (3) partially completed (4) failed to complete.
e. If all parts are completed “satisfactorily” 1-3 additional points may be given for “extreme merit”.
f. No points will be given for “style”.
g. All judges will be publicly known, and are required  to turn in signed voting sheets which are also public.
h. No judge can participate who has a family/business associate/or other close relationship with a coach or other intimately
connected person to the athlete.

No doubt there are  a hundred things wrong with what I have devised. But seriously this stuff is getting to be a joke and something must be done.

And is it time to devise a definition of eligibility? Are we going to have professionals or amateurs or some of each? Since we cannot stop the corruption of countries paying and supporting athletes to give them a hand up, we need to figure this out too. I have no salient opinion on this at this time. It’s fraught with landmines I fear.

On to MARCH MADNESS!

9 thoughts on “If I Ruled the Olympics”