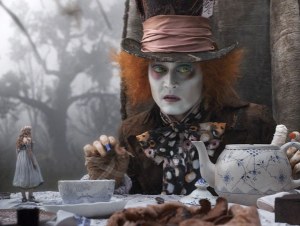 Of the 4,272 things wrong with the Tea Party movement, thing #235 is most egregious I suspect.

It is the fact that individual “members” actually think that they are part of some grassroots movement and that this proves that they  are smart enough, should be in charge of public policy.

It is so well documented that the “movement” is not grass roots but rather the concoction of corporate America aided and abetted by political power grabbers, as to need no further linkage here.

However, that doesn’t stop high school educated housewives and mechanics in sleepy hollows across Merika from scratching and musing: “yeah, let’s get up and picket that gov’mint thing over thar!” Soon, somebody has started a coffee klatch and next thing ya know, a block club is forming, and voila`, another “tea party” offshoot is born.

Then of course, they start decidin’ what grinds them. What they don’t like, and first off is taxes, and then not have’n no “God in our schools no more.” Actually most of these folks don’t go to church, but they remain mum and nod at the two or three that do. What the heck. Who cares anyway?

Then of course, things turn to whose to blame. And we got yer Muslims and their strange ways, definitely suspicious. Then we got them wetbacks from Mexico, with their dirty drugs. Yeah.

Oh yeah, about those taxes thing. Somebody suggests maybe the banks are to blame. And they are, so we shouldn’t bail them out, so the gov’mint is to blame for doing so, but more than half of Merika now has forgotten that Bush did that. Most think it’s that BLACK president.

Hey, isn’t there talk that he is not really Merikan? More like Muslim and from Africa? Yeah, that’s why he’s siding with the banks and the auto industry.

You can see, they are pretty much not the most logical well-read people in the world. Closer to some of the worst. Yet, they are hitchin’ up their pants, struttin’ their junk, and thinkin’ themselves mighty powerful. “Listen to ME!” they chime.

So it stands to reason, that given that they have no real clue about much of anything, that they would be agin’ net neutrality. I mean the gov’mint is FOR it, so they should be AGIN’ it, right? I mean they are logical aren’t they? Sure they are.

I bet if you asked, not a one of them could define what net neutrality means.

And I’m not guessin’ here folks. A bunch of those tea party groups got together and sent a letter to the FCC  and demonstrated quite clearly that they are stupid beyond belief. “Too much gov’mint power,” they wail, and worse, “it’s an affront to free speech and free markets.”

Yes, as we used to say in the day, I KID YOU NOT. The letter will be bronzed and kept for all time as proof perfect that the MASSES of redneck, racist, etc, etc, etc, NASCAR, beer-swilling nitwits of working Merika, are beyond idiotic, they are screaming meemies insane.

Net Neutrality has as its sole purpose the very things they claim to want: Protection of freedom of speech and a fair and level playing field for all voices, theirs included. They of course fail to see this, since they are essentially incapable of hearing a rational explanation of anything and actually digesting it. They can only knee-jerk react to anything the gov’mint proposes is by definition, wrong.

However, of course, should they be in power, it is precisely through gov’mint that they will take away everyone’s freedoms and rights by imposing their interpretation of right and wrong on everyone else. There will be no freedom of worship, only freedom to worship as a Christian, and by the only allowable dogma of the born again backward thinking illiterates.

There is but one alternative theory, and that is that the tea partiers envision a world in which they are in charge, and thus, they are happy to suppress the liberal voice on the Internet in favor of only those voices that proceed in lockstep behind the wacko right agenda.

In either case, they are living in a world of their own creation.

The buffoons in corporate America and their lackeys Armey, Rove, Hannity, Beck, Kyl, etc., may someday come to rue the day they opened Pandora’s box and unleashed the great illiterate angry mob of pissed off Merika. They may find this dog has turned to bite them as well as the rest of us.

If you listen to the likes of Angle, who says we just might have to take up our 2nd amendment rights in order to have our way, then we may discover, that much to the dismay and shock of the Hagee-oriented “Christian” community, Armageddon is gonna be right here in the US of A.

The GOP has been using some version of “just say no” for some time now. One is tempted to ask, “how’s that workin’ for ya?”

From Pumas on, they’ve been banking on the “nope, no way” constituency to materialize into a real force. So far, it’s been a wash. The Pumas as you recall, were all those women who were Hillary supporters who were supposed to flock to the GOP once McCain chose that woman for all seasons, Sarah Palin as his running liar.

The Pumas of course never materialized, and Sarah soon grew wearisome to a thinking public.

Since the election last year, it has been the unmitigated decision of the Rethug leadership to simply oppose everything. And it seems, like Nancy Reagan’s anti drug program, not to be making much difference, other than to make them look clearly what they are: crybabies and bad sports who trade public welfare for being contrary.

They oppose the extension of hate crimes legislation,  although we have had it for decades now without the world coming to an end. Some Rethugs found themselves opposing legislation proposed by Franken which would eliminate a contractual prohibition to sue rapists who worked for the company. I mean do you really want to be publicly on the wrong side of that one? “NO, I think Haliburton should be able to keep women from suing Haliburton employees who rape them. After all, profits must prevail!”

Similarly, when you look at net neutrality legislation, what do you find? Yep, you guessed it, the Rethugs are against it. As someone said, all you need do is look who subsidizes the Republican by way of contributions to know whose side he or she is on. I mean who doesn’t want the Internet free of priority speeds for certain companies?

And then there is my favorite of all, posts on Facebook. One of our less than stellar brains posted a report on how many wars and deaths had occurred since the United Nations had been instituted. The lead headline for the piece was something like “How’s that peace doing for ya?” Well, first of all, dumbed down, the UN has not started any wars and has not aggressively set out to kill anyone. They try to STOP wars and aggression. Not exactly their fault that they are not internationally supported by the member nations in peacekeeping. I mean, seriously, are you not for peace? I thought that was kinda a Christian thing as well as a mature human thing. Maybe I’m wrong.

Then we have the utter slimy behavior of the right wing pundits. I mean, the rank and file, the middle of the road, read SANE Republicans can’t even complain about the insulting load of bull that is barfed out upon the great illiterate uneducated tiny tots of the electorate. Lindsay Graham, who admittedly seldom comes up for air by pulling his head out of McCain’s backside, tried to complain about Beck, only to be booed off the floor at the next town hall meeting he attended. The crazy minority, most of which are holding up their bibles as pitchforks, won’t allow any criticism of the idiot brigade.

So, of course they feed them the swill they wish and damned be the facts. This has been demonstrated again and again with Hannity. He cuts comments and re-pastes them to say what he wants, even though the speaker clearly meant otherwise and said so DIRECTLY. Now we have Rush, quoting from a “paper” allegedly written by Barack Obama in college. The paper was critical of the constitution and was leaning toward socialism. Of course Rush was near orgasmic in his outrage. When a sycophant whispered in his ear that the paper was a hoax, he refused to apologize, but merely said, “well, we know he really believes this stuff anyway.” And the folks who listen to Rush, not being educated or even mentally average, lap it up in their unknowing bewildered world.

Finally we were watching Jon Stewart last night, hands down the best actual pundit in the business these days. He had on Susie Essman, of Curb your Enthusiasm. Susie suggested, and I had said the same, that Sarah Palin and folks like her, who continue to insist that dinosaurs and man walked hand in hand in our not so distant past, against ALL the evidence, should be prevented from using technology.

I agree wholeheartedly. Now I know that the illogical nut case can’t understand the hypocrisy of being okay with some science and vilifying other science, sometimes even when they overlap, as in medicine (which they like) and evolutionary biology (which they don’t) but the rest of us can. You can’t pick science as “good” when it transports you across town, allows you to call other countries, lets you surf the net, and cook dinner in minutes instead of hours, but then claim that science is some monstrous behemoth of atheistic mumbo jumbo designed to hate God and his Word. We know you are being disingenuous, but at least we do admit, you don’t get it, because you don’t have the smarts to get it.

All this being said, it’s not really a complaint. It’s really a  big thank you Republicans. You continue to satisfy your extraordinarily weird collection of misfit followers, but you totally turn off the middle and the left. Having five percent of the electorate in your pocket doesn’t win elections. So keep up the usual swill. I hear Bachmann and King and others of the “crazier than any loon” brigade has introduced legislation to commend and honor all those who marched against taxes. Good luck. Those two are good for another ten votes every time they open their mouths.

And so it goes. Just sayin.’