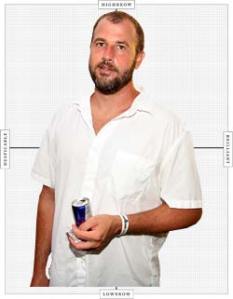 Okay, so yesterday’s post was a bit of fluffery. I admit that. But I do have an excuse.

You see, our television, only two years old, blew up. Suddenly, no picture and a thick white puff of smoke floated toward the ceiling. That can really put you off your feed.

Well, yesterday we went a television hunting, and this time for a shiny new flat screen. In anticipation of our move to New Mexico, we knew we weren’t gonna lug those old-fashioned behemoths around any more.

And we got more than we bargained for. Prices have come down considerably, and we have a nice 32″ beauty that had us oohing and ahhing last night. (We shall forget the cussing and gnashing of teeth as the Contrarian went through his usual, “I can do this without any stinkin’ directions” episode, before grabbing the manual and reading what plug goes where.

Anyway, I ran yesterday’s blog up quickly before we left. Truthfully, we do watch Survivor sometimes. We have skipped seasons entirely, and we have quit mid-season a few times, bored with the field of contestants or for some other reason. But truthfully (this becomes important in a minute) Rob Mariano is a favorite of mine and we enjoyed how he manipulated the newbies. A truer Svengali was never met, nor one with a cuter smile.

Anywho, I was back on the computer, doing e-mail stuff. The television in the office was on, as it always is, and Oprah was on, as alas she usually is, given that there is freakin’ nothing else on at that time of the afternoon. Phew. I catch a bit here and there, and mostly don’t watch.

Anywho, again, she had on this dude called James Frey, whose pic is above. He had written a book called “A Million Little Pieces” of which I had never heard. He was back on Oprah after a big kerfuffle about the book. Seems it was written as a memoir and was more fiction than true story. It seems that Ms. Winfrey had named it to her “Book Club” as a selection, the book sales had gone through the roof, when all this untruthiness had come about.

It is not clear who is mostly to blame for all this. Surely Mr. Frey was aware that he was portraying his bout with drugs, alcohol and crime by stretching some facts and making up some more. Were the publishers derelict in “investigating” the truth of his story? Was Ms. Winfrey’s staff similarly derelict in their checking out the book?

Whatever, Oprah had the man back on in part it seems to make some amends for what I am told was a thoroughly excoriating interview she had with Frey after the “hoax” was uncovered.

Part Two is on today, and I suspect I’ll pay a bit more attention, since there is much to contemplate here.

Frey read some folks like Faulkner, and decided that he wanted to write, to move people as he had been moved. With apparently not much of a background to draw from, he spent some years in pretty dire circumstances, while trying to learn to write.

I’m not defending him, nor condemning anyone either. He wrote a book, and a publisher wanted to publish it as a memoir.(Given that I know a few bloggers  who write beautifully but can’t get published, while a complete cypher of a human being named Snooki who is probably not as smart as a rock, can get published, I can understand the allure to Mr. Frey)  It sold lots of copies, and tens of thousands more after Oprah pushed it. She was moved by it and claimed everyone at Harpo was as well. Hundreds of testimonials were written. Addicts galore claimed that the book had been of great help to them.

After it was determined that Frey had inflated or simply made up some of the “facts” all hell broke loose. Oprah, as we have said, publicly whipped him. People sued, claiming “emotional pain and distress”.

Frey was all he claimed, a drug addict and an alcoholic and a criminal, albeit a very petty one. Do those who were “helped” suddenly become less “helped” by the revelation that words and scenes were not necessarily actual?  I truly don’t know.

New writers are often advised to “write about what you know.” Certainly, if I am reading about the history of my country’s foundation, I want to know of the writer’s background. A degree in religious education, for instance, is a whole lot less persuasive than a doctorate in American history from Yale might be, especially if you the author are trying to convince me of a wildly new theory of how our country formed.

But, seriously in fiction, writers write about things they don’t know all the time. Colleen McCullough writes about ancient Rome, after writing about the hierarchy of the Roman Catholic Church for instance. So we know that good research can make up for a lot of lack of personal experience.

And no one claims Frey didn’t experience being all the things he wrote about. He embellished them, to be sure, but does that make his conclusions less valid?

Is there a firm line between memoir and fiction? Aren’t we always interpreting actual events through our own lenses? Aren’t we putting them together in our minds with other, recognized and not, “events”. Aren’t our visceral gut feelings responses to conscious and unconscious thoughts and remembrances?

Were those helped less helped? I suspect not.

What are your thoughts? How would you feel if what had been useful to you turned out in the end to be a hoax of sorts? Have you experienced something akin to this?

I confess to being perplexed on this one.