I admit, I was intrigued. I bit.

The next Saturday when the sheets were dry (I waiting with eager anticipation I gotta tell ya), I raced to the bedroom with my sheets and started following the directions as I remembered them.

After three tries, I threw the wadded up mess on the shelf in disgust.

I went to YouTube and searched for a fitted sheet folding video.

And I found dozens.  I mean literally dozens.

So I tried again.

Finally after watching ever more closely, I got the hang of it.

So I was going to just mention it to you in passing–you know the way people do on the street–“hi, good morning”–(walking past each other, then turning)–“let’s do lunch next week okay?”–(walking a bit further but still not out of shouting range)–“oh, hey, your hair looks great like that! New style?”–now just a bit too far past to hear, so wave and turn and go on your way. . . .you know what I mean.

Well, normal. That is a relative term if there ever was one right. I mean if you are in a “home” for the crazies, and you are the least crazy, well, you’re normal as far as they are concerned aren’t you? And if you are at a psychiatric conference in San Francisco, my dog probably qualifies as being the most normal. Ya see what I mean?

I mean really? A sign to tell you what you are looking at? But she means it literally, as you can see:

See? These are not “antique” quilts but “play” quilts. Don’t get mixed up.

Here’s the whole enchilada if you wish to see a “well-conceived linen closet: 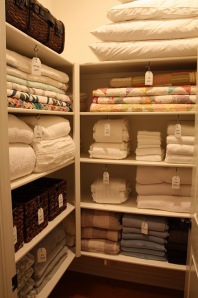 I mean it’s to die for right?

I knew a person like this. But it was a guy. We used to sneak into his office and “mess” it up for fun. We were adults. He put up with us. He bought a house. A year later he was “sorting” out his attic.

I admire people like that. When I don’t call them crazy. You can admire crazy.

I can be tempted by “order”. But I fight against it.

It may seem ordered, but it’s really ordered chaos.

The blog is called “I Lived on Wisteria Lane”. She seems to have stopped blogging abruptly in October. That’s always worrisome. If you like organization, well, do visit it.

By the by, I still can’t figure out fitted sheets. I have a mental block I guess. I’m a failure in the housewife wars.

I am going out soon to help with planting. I have my new L-shaped planters to fill with petunias in the front. And about seven thousand planters in the back. The Contrarian is concentrating on the veggies.

We’ve got plenty of good old New Mexican soil in the bottoms of everything. It’s hard as a rock. It doesn’t seem to rain here.

We have bags and bags of manurish top soil. It smells like horses, well the behind of horses. Wait, that’s not right either. I don’t smell the behinds of horses, I can promise you that. But the stuff that falls out of their behind. The dirt smells like that.

Diego likes the smell of the soil. Maybe he would even like the smell of a horse’s behind. He doesn’t say. We have put up wire lines to keep him from rooting and digging in the big beds. He’s a dog after all. They like dirt apparently. Diego digs in the desert a lot. I think he’s looking for jack rabbits. He just wants to be their friend.

They don’t seem to understand dog speak though. They run. They run very fast.

Just me knitting in the garden