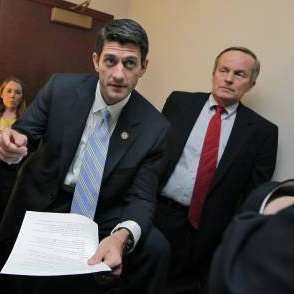 See that guy to the right? The one paying attention to Paulie? That’s an idiot.

Yep. If he pulls down his pants, you will see it tattooed on his butt: “I am STUPID.”  I swear. It’s there.

I’m sure you already heard. Toddikins fashions himself something of a gynecologist you see. It  seems to him, based on his vast experience, that no woman who is LEGITIMATELY raped, need fear pregnancy, since  her HORMONES create some kind of super killer fluid that kills the sperm of a rapist. Only ILLEGITIMATE rape victims get pregnant, which is how you tell the difference between a real victim and one of them sly girls who is just angling for an abortion.

You see, Redisgusticans think of women as sneaky sly creatures who are always trying to put something over on men. After all, it was a woman who ate from the apple and then with seductive wiles talked poor old Adam into taking a bite too.

That’s why their bills (Ryan agrees) use the term “forcible” rape–to catch the bad girls and make them be mothers against their will. Oh, I forgot, it’s for the baby. Except that they don’t like food stamps, day care, or aid to single mothers. The “care” stops at the delivery room.

Speaking of Paulie boy, who is, as  I said, opposed to abortion in all cases except when three doctors, a priest, and a Republican have certified that the mother’s life is forfeit without it, (okay I stretch the truth a tiny bit), likes to rock and pump iron to the tunes of Rage Against the  Machine.

As happens all too often when it comes to GOOD music, the authors of same are none to pleased to be associated with the likes of Paulie and his ilk. This has led to innumerable numbers of cease and desist orders being filed against various GOP contenders over the ages.

Well, RAM can’t prevent Paulie from listening to their music of course, but they sure can tell him what they think of him and his policies. Paulie is apparently too obtuse to realize this on his own, so Tom Morello from the band took a moment to ‘splain to Paulie that they would just as soon he keep his 1% lips closed as it referred to them.

Read his remarks in Rolling Stone. Just a snippet to whet your whistle:

So I was thinkin’. I do that regularly in case you were wondering. It how I come by my sparkly personality and amazing wit. I am humble beyond belief too. Trust me on that.

Well, anyway, the GOP does have their go-to bands. There is always has-been Ted Nugent. He’s always ready to whip up some dirty cat-scratchin’ if called upon. And then there is good old space cadet, Hank Williams, Jr., whose Sr. is rolling in his grave in embarrassment no doubt.

Anyway, as I was sayin’, you remember Hank was taken off Monday Night Football for his nasty remarks about the President, which he said were “wildly taken out of context.” I’m not sure what his excuse is now.

At the Iowa State Fair, he said this:

“We’ve got a Muslim president who hates farming, hates the military, hates the U.S. and we hate him!”

According to the newspaper, this was met with applause. I don’t doubt it was, given that only toothless Muckersville rejects walkin’ barefoot with moonshine jugs in hand, were likely to be at the “concert.”

indicating he cannot tell the difference between a book and a place. When Hank sleeps, the IQ of the planet goes up ten points.

Some people ought to wear a sign that says: train wreck occurs when I open my mouth! One of those person’s is Geraldo Rivera, washed up has-been and never very good journalist who comes on Foxy now and then and says really stupid things.

So, GR was visiting Fox and Friends (who would want to be one of them?), and they were discussing a top person in Homeland Security who was on leave for sexual harassment charges and discrimination against men.

Following the completion of the “discussion” about this “scandal” (which nobody else heard about), GR interjects an entirely new subject which is really what he wanted to talk about.

“I have a question, is this subtext of the Department of Homeland Security scandal — that there is some kind of lesbian cabal, that it’s a same-sex takeover of the big agencies?”

“I don’t know, it seems like everyone is talking around it,” Geraldo said, as he picked up steam. “Is that really what people are saying? That men are disadvantaged because women and specifically lesbians are ruling the roost there?

You remember GR right? The guy who basically said that the Trayvon Martin was killed by George Montgomery because he wore a hoodie, which as everyone knows, makes everyone think you are a gangsta.

And that is purely enough crazy for one day. You have now established that you are sane. Go about your day.