I don’t recall as a pubescent girl, ever much thinking that I’d have rather been a boy. All that stuff in their pants looked rather homely to me as a child. As I grew older and wiser, I figured worrying that my boobs wouldn’t be “perky” enough was small potatoes versus worrying that my pecker wouldn’t pass muster either in the locker room or in a ladies vagina.

And then there was hair loss later in life, and well, I don’t pretend to know whether men obsess over chest hair or not, but it just seemed that their burdens were not worth the exchange.

I suppose it all goes back to caves, or whatever suitable accommodations were “home” to our ancestors on the plains of Africa. Men are for the most part stronger which makes them quite useful for things that require brute strength. Ironically men who work with their hands and use their bodies as their machines are fairly looked down upon by their Madison Avenue brothers as having not “made it” in the wicked world of power and wealth today. But it was the originator most likely of men’s superior classification.

In an event, men ruled, and that is pretty much everywhere you look across the blue marble we call home. In the only parts that counted (by those same men), white men ruled all others, including men of color. And it was all seen as good and well, as evidenced even by major religious scriptures, who took it for granted that men pretty much ruled naturally and with God’s imprimatur.

Somehow, even allegedly smart white men failed to see that Jesus rather turned that cart upside down when he suggested that women were, *gasp* capable of preaching the “good news” of the coming Kingdom.

Things have gone on in that vein for some time. Well, to be honest, it has gone on through most of recorded time. I’d hazard a guess that even where women ruled it had more to do with “blood lines” than competence, and many sturdy men were gathered around such a lady to “guide” her to correct decisions.

It continues today, but the battle is now fully engaged, and white men are getting a bit nervous. 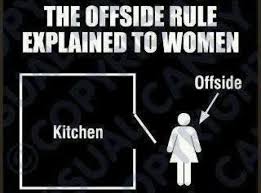 Women have always been angry, but anger needs direction and some sort of power base to be effective. Only in the 20th century do we begin to see real movement to question the paternalism that has been the history of women’s life in America and the world.

Another aspect is now apparent as well. While white men were busy running the world and making obscene amounts of money to feel “successful”, the rest of the planet was busy reproducing like rabbits. Left with so much extra time on their hands, they played in the garden of rare delights also known as ladies private parts. And the birth rate has skyrocketed and well, do the math.

Ms. Lindsey is correct. If you look around white dude, well, I can understand why you are shakin’ in your boots and clingin’ to your guns. Your days are numbered and no amount of prancing around neighborhoods with your semi-automatic penises strapped across your chest is gonna make any difference to that.

You are a not dying, but certainly about to become wheelchair ridden, mere shadows of yourselves.

Now, I don’t say this with glee necessarily. After all, I’m married to one of y’all.  I rather like him too, so I have no ill-will in general to white men, just everything mostly that they stand for.

We can all pretty much agree that you have done a lousy job of runnin’ things. I mean yeah, you build a lot of stuff, but it seems for the only purpose of blowin’ it all up eventually. You guys can’t stop arguing about whose penis is bigger and if you ever bothered to ask us, you’d know that has nothin’ much to do with it.

And our sons and daughters and well, all of us suffer for your insatiable desire for bloodshed. There just ain’t enough hills for all of ya to be kings on.

So I can get why you are so angry. And like petulant children who can’t have ice cream for breakfast, you take it out on everyone you come across.

What you all are in need of is some basic psychoanalysis. I mean your ability to blame it on anybody but yourselves is shocking. It’s the black, brown, female, immigrant, wrong religion, youth, liberal, educated, government, et ceteras into oblivion’s fault for your troubles. A white man never looks in the mirror and sees the cause of his own disaster.

Anyway, you get all out there in your twisted but fact-less minds, and become conspiracists of one sort or another. We’ve visited the FEMA camps, and gun confiscations, the Muslim Brotherhood infiltration to death. We’ve been birthered to death and delved into the drug-induced supposed gayness of the black guy in the WHITE house.

We have tried to talk sense to your sense of impending loss, we really have, but past a certain point, crazy is too crazy to hear let alone understand. You are like the child who attempts to solve his unhappiness by making public scenes of displeasure at the world.

Unfortunately, you’re methodology includes the killin’ of plenty of innocents as you strike out in anger and frustration that you can’t always be first in line and get the best cupcake.

You are like the king who rules over a kingdom of “others”. Once his army became “others” too, it was only a matter of time, until they learned to count. Suddenly it was lookin’ a bit grim for the king.

Some of you have taken to claiming that you are the one’s being victimized now. Oh, if only that were true. We’d surely come to your aid if it were true. But it’s not.

Nothing is more pathetic than hearing a white dude proclaim that he is being discriminated against. Dude you were born with a white penis, what more could a person want? With it came all the entitlements and assumptions that have always attached to a new born white male. There is no “stretch” to thinking of you in a new more powerful way. It’s business as usual for you.

You can’t fathom how that is not what it is for the rest of us. We have to first convince somebody(s), that we can do the job, that we are smart enough, strong enough, carry the right emotional schema, are not unsuitably encumbered by family and obligation, and a host of other things. Women must explain that their menses won’t cause them to divulge the nuclear codes nor will “pillow talk”. Black and browns must assure that they have enough of the “cultural”requirements to govern. Remember, they weren’t “raised” the same as white dudes, which has become by their decree the cultural norm.

And since the numbers, (damn them) simple are what they are, white dudes are gonna lose no matter what. You can’t shoot it, marry it, enslave it, or stick it in a company town. It’s just gonna swallow you up.

So you lash out.

Do you realize that almost all crimes of mass murder are committed by white men? Dude, this endears you to no one. Let us know that your brains are falling out because you can’t be king any more, and we will help. If you don’t, well, the end is your demise one way or the other.

But please, stop trying to take us with you.