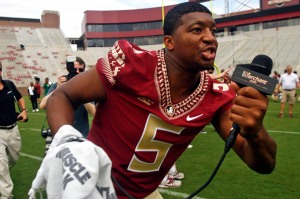 For reasons that I don’t truly get myself, I’ve been intrigued to the point of passion with this seasons college football season. On the whole I rather like college sports over professional, and I’ve watched not only my beloved Spartans, but the entirety of the national race for #1 team of the year.

I confess that I enjoy all the games, albeit, I am intellectually against what I see as an over-emphasis on the unholy dollar bill.

I admit up front, that I don’t know a single “fact” regarding Jameis Winston’s rape allegation. I have read generally that many who have looked into the allegations believe that the University of Alabama and local authorities either deliberately ignored evidence or worse, or at minimum failed miserably to conduct anything like a reasonable investigation. Winston may well be innocent. I have no clue. There are rape charges that are untrue, and as a lawyer, I had one or two that I felt were bogus.

That’s really not the point here. The point is, that if there was not a full-fledged investigation, then justice was in no way served, and it can only be for one reason. That reason is that Mr. Winston was deemed too important to the football program at Alabama to be lost. So he was not to be benched “pending investigation” even. Rather it was, it seems all made to go away, with him never missing a snap.

Again, this case is not important, but indicative of a greater problem, one we saw even more clearly at Penn State regarding the Sandusky affair. People look the other way, push evidence under the perennial rug, and otherwise not upset the financial apple cart. What apple cart is that?

It is said that among the major players in the NCAA football world, schools bring in millions of dollars per year. In fact at Penn, one year’s profits covered the $60 million dollar fine imposed upon them.

In nearly every single state in the union, the highest paid person is a football or basketball coach.

The revenues of the athletic departments of these schools are separate from the university budget and are TAX-FREE.

I am no fan of Jim Harbaugh. In fact I dislike him rather a good deal, but I surely get why he decided to downsize from the pros to college, when Michigan offered him a 7-year contract worth $40 million bucks. Imagine, 40 MILLION BUCKS to instruct young men to play a game!

One could, at one time I guess at least argue that these young men were at least getting an education. No more of course, with the big talents opting out for early drafts, leaving school without their diplomas. And of course the atmosphere now may be anti-learning anyhow.

Cardale Jones, the third-string quarterback that will play for the national championship in a couple of weeks, tweeted on Friday the following:

Why should we have to go to class if we came here to play FOOTBALL, we ain’t come to play SCHOOL classes are POINTLESS,”

Yes, I guess they are Cardale. Here we have a child in a man-body prepared to stake his entire life on the millions he dreams of making in the NFL. What will he do if that is cut short by some catastrophic event before he steps off the plane to sign that contract? An uneducated, nobody looking for work just like everyone else, all because education is like “pointless” dude.

Yes, they do entertain us, and they do an excellent job at that, but I’d be willing to bet that that is not what is at issue here anymore. It’s all business and no doubt it starts now at the high school level.

On New Years, MSU came back from a huge deficit, a game that was surely lost, and scored and scored again and again, until they were within a touchdown of winning. And then they did it. They scored, and Baylor road home stunned and unable to fathom what had happened.  Houston did the same thing yesterday to Pittsburg, scoring like three times in 15 minutes and winning two on-side kicks in a row.

These sorts of games make fans jump for joy. Yet in a state like Texas, the Baylor players may well want to transfer to another state to play next year. Football is life there.

Still, when all is said and done, colleges and universities are supposed to stand for something. It is supposed to be about building character in youngsters through athletics, team and individual efforts, winning and losing and doing your best and accepting being bested. When the FSU players walked off the field after being bested by Oregon, were they showing character or simply the behavior of brats who have been coddled into believing that they were God’s gift to humanity and deserved to win?

Are we teaching our youth anything that will sustain them in the future when we play to this sort of thing? When we pay their coach millions for a game? When we “wink, wink, nod, nod” them why supplying them with “extras” under the table? Surely you must know they do.

Can we expect a Cardale Jones to believe anything else when his coach makes ten times more than the university president?

I recall many years ago a young man who stood before a judge about to be sentenced for some criminal act. He wore a jacket with the name Georgetown emblazoned across the back. The Judge, an alumnus of that university, asked, “do you know what Georgetown is, sir?” The youth replied, “yes sir, it’s a basketball team, sir.”

Such is the state of athletics in America.

It should not be so.

No. It should not.

* factual allegations regarding the football programs and their profits is drawn largely from this article at the Washington Post, “Why Jim Harbaugh is worth $40 million  to the University of Michigan’s Football Team.”

9 thoughts on “They Make Too Much Damn Money”