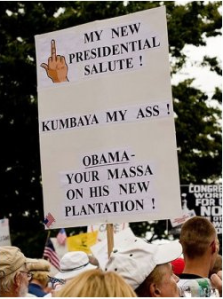 When I read this article, it kind of all became clear. What article? This one.

It’s another of those that I have read recently that redirects the finger back at the liberal establishment for the perpetuation of racism.

Not in the way you damn real racists believe. Not in your stupid, we are post-racial and I’m not a racist, and if you play the race card, you, damn libtard, are. No, not in that way.

Some one suggested to me a week or so ago that liberals are the real racists, and she meant it. I admitted that that was a possibility in some sense, but in reality that would be an oxymoron of sorts. Liberal by definition excludes judging whole classes of people on the basis of some preconceived and wrong notion. Find me an overtly racist liberal and I’ll tell you to try again to go find me a liberal, cuz honey you ain’t got one.

I no more think all Republicans are scum-sucking whack jobs than I think all Democrats are destined for ambrosia and petal-laden avenues in heaven. I come closer to the “all” epitaph when it comes to white men, but I can rattle off several dozen to whom it doesn’t apply starting with my own husband to really mean that either.

Liberals, according to the psychological and sociological testing done by a myriad of smart people in a variety of institutions of higher learning, are people who are more adventurous when it comes to the great unknown, would rather try something new than use something old, see a symbiotic relationship that extends to all peoples of all places and includes animals and the environment. Our tribe is humanity, so we naturally don’t group people into cells of otherness. We like facts and logic. We have values but we know that facts and truth trump our parochial notions, and values can and should change as we accumulate more knowledge about ourselves and the world.

I’d be the first to tell you I didn’t start out that way. My parents weren’t particularly political, in fact my mother could not have told you a single fact about any important issue before the body politic. My father had opinions, but they were such a mishmash of conflicting direction, that I gained little insight into the world of conservative vs. liberal from him either. What he was was a racist, and he made no bones about it, though in his later years he learned the correct “words”, no longer using the “N” word and substituting “black” uttered with an guttural blah at the beginning that left little to the imagination about his true feelings.

He learned that a distant cousin’s child had married an NFL player who happened to be African-American and he took great delight in announcing “that’ my cousin” as the player ran down the field. It was not meant as praise nor as puffery. It amused him to be considered “family” with a person of color. It was a joke you see.

It took me getting to college and beyond, and later working and living in close proximity to people of color before I began to see the light of reason. At first it was a bit of a surprise to realize that all people pretty much are the same. African-Americans became my friends, my best friends in some cases, and lovers in a few too. They became mentors and people I came to admire for their values and principles and accomplishments. The point was, African-Americans were just like me, just like you, possessed of all the grandness and foibles that are the lot of humans.

I’ve always been good at seeing the bigger picture. I soon realized that Asians and Hispanics, and all the Pakistanis, and Arabs were all the same too. That happened a very long time ago, and I’ve learned a good deal since then. I’ve been, to a small degree, a part of the continuing struggle to bring justice and equality to this country.  I’ve learned the ins and outs of strategy and the uses of the NAACP versus SNCC, versus the Panthers, and others as the means to the equality that we all see as necessary and inevitable.

What I have learned in my dotage is that being “nice” doesn’t work. I have talked to a lot of racists who tell me how they are not. They tell me about their black friends. They tell me that their black friends are like them. Bullshit. When you tell me how wonderful Ben Carson, Herm Cain, Alan West, Alan Keyes, and people like that are, and in the same breathe tell me that Al Sharpton and Jesse Jackson are racists, well, you need say no more. You have no black friends. You may have African-Americans whom you work beside, but trust me, they think you’re a racist and probably call you a cracker behind your back. If you are trying to impress them by telling them that you would sure vote for that Ben Carson fellow, then they surely know what you really are.

There is no nice about this ugliness in America. And those of us who are white, well we have to stop the “please don’t riot, be nice like Dr. King taught you.” We don’t run this show. We only have a right to offer ourselves as “hands” to do whatever tasks need tasking. We must encourage other white folks to speak up and be loud too, but our task is not to lead but to confront racists and poke them continuously with the stick of recognition.

The fact of the matter is that a travesty is occurring in this country and has been going on for EVER. Young black men die because police and others can get away with it. And they know this. We cannot fall for the explanations and excuses and the sanctimonious “advice” offered by people who don’t live this experience, and don’t deal with people who do.

It is NOT enough to agree that people shouldn’t destroy property, and sympathizing about what drives people to extremes. That is bait, set out to deflect the conversation away from injustice to excuses for why the police can’t be blamed for the poor upbringing of black boys. Keep focused on the reality of black men being abused daily on our streets. Keep focused on women being pushed around and assaulted by men because they can. Keep the focus where it belongs.

I don’t give a damn whether Bill Cosby’s career is ruined. I care about the women who have come out in droves to repeat the awful things he did to them. THEY ALL CAN’T BE LYING.

I don’t give a damn whether A woman lied about being raped. I care about the thousands who have been and who are afraid to face a condemning society that till tries to make it her fault.

I don’t give a damn what the grand jury testimony was in any of these cases. The fact remains a trial should have ensued because trials ensue in 99% of all the cases they hear as long as cops aren’t involved as potential defendants.

I don’t give a damn if many, or even most cops are good and risking their lives every day. They chose the career after all. I care about every damn dirty one who uses his/her power to push around others because they feel ineffectual everywhere else.

Some of you have told me that I’m not nice. You are supremely right. I’m not. I’m not nice to hate and injustice and inequality. I’m not nice to power used against people to keep them small and beaten down. I’m not special. I’m part of that great sea of decent people who mostly are nice, because they don’t want to offend. Well I want to offend. And I’m not going to be the least bit shy in telling you that you are a damned racist when you use the words and codes that announce it to the world.

It just happens to be the penalty you pay for watching that shit-“news” show Fox. You don’t even know, that based on what you do say, you might just as well use the “N” word, we all know what you mean.

And when more white people stop being nice, as the article suggested, well, then we might just cause you to go inside your tiny little mind and slam the door and avoid the public where you don’t belong. And we can get on with the work of building a decent society where people come first, ALL people, not just your lily-white group.

PS: And all that crap about “I am not against immigrants just ILLEGAL ones” (oh the crime!) We get that too. It’s just code you idiot for all your fears and your real cowardice to state the truth of your bigotry.

1 thought on “I’m Not Nice, and I Don’t Intend to Change”