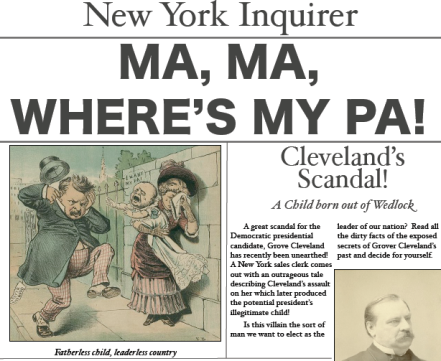 Making broad generalizations about anything is usually dangerous business, and this is no exception. I’ll state my belief and then, well assume I’m probably wrong.

From the perspective of a normal lifespan, it appears to me that political discourse has changed. I seem to recall in my youth, when politics played but a minor interest across my frontal lobes, that the one thing that would kill a politician was to be caught in a real lie.

The lucky journalist who could ferret out the scheming liar was rewarded with a bi-line and the unfortunate recipient of his/her research retired to pick daisies in their garden while shunning the public forevermore.

Today, the lie is revered for its ability to start the firestorm of controversy.

Let me explain with an example my husband once used in a piece he once wrote.

Man takes a loaf of bread for another man. (the fact).

Newspaper 1: Desperately poor man is forced to steal a loaf of bread from wealthy financier in order to feed his family.

Newspaper 2: Lazy local man steals a loaf of bread from beloved philanthropist to feed his dependent family members, none of whom work.

Although I believe that journalism has fallen off a cliff, it probably hasn’t. Emotion has always sold better than simple facts. While the above suggests that “both sides” do it, we know rather definitively that they don’t do it equally. However, THEY BOTH DO IT.

It’s not hard these days to find a number of people making the point that things are infinitely worse in our political drama called Washington, because the press has determined that all that interests them is controversy. If you want to get on camera and say that the other side sucks eggs and is the latest great installment of totalitarian governance, well, you will get that microphone. If you wish to fuel the hate, by all means, spout off.

That drives up ratings apparently.

The media does not cause the hate, but they do nothing to stop it. They watch the alley fight with fascination, and encourage it from the sidelines, occasionally dodging the odd piece of mud that flies from the melee.

This became clear this morning when Mika Brzezinski pointed out about the “Bill Cosby controversy” that the news people seemed apologetic to even ask Cosby the questions. Indeed they are. The icon of comedy is somehow untouchable at “his age” much like the genius of Woody Allen is guard against his possible pedophilia activities.

It works as the politicians intend for one reason. They know to whom they speak. They believe fully in their heart of hearts (no matter how much they flatter  and pander when called upon), that most people are ignorant as dirty water left over from a pig bath. They lie, knowing that the media won’t push back, and the listener has neither the time nor the interest in determining whether they speak a lie or truth. The lie works, and the media is complicit in the drama.

A guy called Gruber said that the ACA passed in part because the American people are stupid and don’t know the first thing about economics or insurance. What Gruber said is hardly news, most any professor across the country would agree, by simply plugging in their field of interest–art history, quantum mechanics, or marine biology. Yet the hue and cry from the Rightie-Tighties was swift and loud. The very folks who depend on stupid were outraged that anyone should say such a vile thing about the American people!

The fact of the matter is that all these people, be they politicians, journalists (I use the term loosely of course), scientists of any flavor, doctors, lawyers,  (insert anyone with a decent college degree and a “professional” job) thinks exactly the same. That is why my friends, that the average working stiff has nothing but contempt deep down in his heart for any of them “ed-u-kay-ed” types, with their snooty knowledge. Gruber said it out loud and for that he can be condemned, especially if you can twist it into some political advantage.

The President contemplates using his executive authority to manage the immigration laws,attempting to fix the worst problems with limited resources. The GOP screams that he is shredding the  constitution. When it is pointed out to some of those who take up the banner that executive orders have been used by presidents since Washington and frankly on issues of even greater important such as desegregating the entire national school system or incarcerating tens of thousands of Japanese citizens, the chatterers proclaim–it’s not the numbers it’s the subject!

But the opening salvos made no mention that executive orders were legal and had been used since the inception of the nation, they simply started screaming about destroying the Constitution. They made it about EO’s themselves. They count on the fact that those who are listening don’t know about EO’s, and will start puppeting the “shredding” remark. And they count on them not listening to other sources that might inform them otherwise. They count on this stupidity. It is their ace in the hole.

We can shut down the government, we can sue the President, we can filibuster each and every thing proposed to lighten the burden on the middle class, we can deny millions health care coverage, all in the name of “stopping this evil man” because we can support our decision by any frightful lie, and know that neither the poor saps we gush at nor the supposedly free press will point out our lies. Nobody is listening, nobody cares.

The only thing that matters is blaming somebody other than me. And everybody who doesn’t want to be blamed is surely able to find a suitable scapegoat. And the press? Well, try looking at the FCC and their willingness to allow the consolidation of radio, television and newspapers into fewer and fewer hands, and then you might get a clue why journalism is nothing more than fluff pieces designed to entertain rather than inform. That would be a start.

**title stolen from my husband

3 thoughts on “The Industry of Controversy”