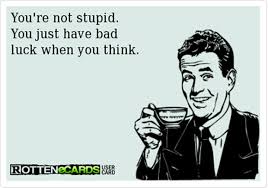 A lady (no doubt a very nice one) took umbrage at my propensity to, as she put it, “insult” people when making a point. My insult is of course pointing out that some people are stupid. I don’t make the charge lightly, since it normally takes some work to be stupid, it doesn’t just come naturally to most people.

I was pointing out that while all people to a degree form opinions and then look for “evidence” to support their comforting thought, conservatives, given their mental makeup, do this to a greater degree than most people. An acknowledged expert in the field of motivation, Jonathan Haidt, professor of Ethical Leadership at NYU’s Stern School of Business says as much, though I dare say he is more diplomatic than I.

That was and is his point after all. The way to reach people who are intransigent when it comes to facts is to recognize that facts don’t sway people who have “gut” beliefs. You must appeal to the that which motivates their world view. In the case of conservatives it is things like tribalism, fears of the mean old world, and comforting religion. While liberals can fall victim to similar emotional motivations, I contend that they do so with less fervor and less often because liberals are by nature open to new ideas and things in general–thus a new explanation draws their attention.

I find conservatives for this reason often illogical and Haidt supports that conclusion. Logic and factual evidence don’t persuade, rather, hitting them where it counts (family, and values) does. If you can structure an argument that helps them to see the truth as supporting their tribal instincts or values as they see them, they are more likely to listen.

I myself, being who I am, don’t have the patience. I hit them between the eyes with the obvious, and then throw up my hands in disgust, and publish yet another diatribe on, you guessed it, “stupid people.”

The truth is, the word ignorant better describes such people, and I can tell you from experience that they loathe this term even more. Of course its the perfect word because all it denotes is that you are uninformed, and aren’t we all on more subjects than we care to mention? I am ignorant about architecture, and can barely tell my Ionic from Doric but fair a bit better with Corinthian I must say. I am ignorant when it comes to “reading” music. The list is long I assure you.

Yet somehow, to call a person ignorant is to deliver a most insulting blow.

People are known to prey on ignorance. These people are called grifters.

Sarah Palin is a perfect example. She is not a stupid person actually–in her own way she is quite brilliant. She set out to become wealthy and famous and has done a fine job of doing just that. She is much too lazy to actually learn much that doesn’t  have to do with her trade, so to normal people she appears buffoonish, but she rather relishes that since it plays to her real advantage.

Sarah’s true audience are other ignorant people, those who are “too busy” to read books, magazines of note, or listen to good public discourse. They are not fans of Mozart (a name they would recognize at least) but have never heard of Berlioz. They might vaguely have heard of Oscar Wilde, but couldn’t name a play he wrote if you held a hot poker to their eye. They probably remember that the name John Locke was mentioned back in high school history but would no doubt answer with the query, “wasn’t he one of the Pilgrims?”

The examples given above are just that examples, one could give an infinite number of similar “tests” of general knowledge and these folks would stare at you like you had grown a second head.

One reads of a time in this country when people went (as entertainment mind you) to listen to a lecture by William James. Parlors were filled in the evening with women and gents conversing on all manner of politics and religion. On the Continent they were called salons.

Today, “family rooms” are filled with kids playing video games, Dad watching football, and Mom making elaborately decorated cupcakes for the church sale on Sunday. Discussions relate to the latest shenanigans of the Kardashians, which team is likely to take the bowling trophy this season, and should they all watch the latest installment of Real Housewives of (insert city) tonight as a “family”. The kids are clamoring for Honey Boo Boo which sadly  I think left the air with me never having had the opportunity to learn what it was.

All this stems, at least as as I see it, from a quality of life that has mired in “diversion for diversion’s sake”. Since we don’t prize education for itself, but only as a means to an end (doctors and lawyers make “good livings”, i.e., more money), we don’t learn the joys of actually learning about the world, the history of it, or anything much else. We work to make money to buy things to help us forget that we hate our jobs, and hate much of what accompanies it.

We hate the commute, we hate the chores and the endless stops to pick up this and that. We hate the meetings, the bill paying, the yard work, the shopping. We hate the traffic, the noise, the crowds. We are physically exhausted from the effort. Is it any wonder that we actually walk into a supermarket and buy “partially boiled potatoes”? Seriously, we don’t have twenty minutes to spare to boil our own! Since cooking is a chore, best leave it to Prego, or McD’s, or somebody else (for a price), so that we, poor beaten down creatures that we are, can spend every single second RELAXING.

And relaxing has taken on the meaning of “make me forget how crappy life is”, so it must be “other”. It must be things that don’t require thinking or comparing, contemplating or contrasting. Relaxing should be mostly mind-neutral, requiring only the barest of attention. Fishing and scrapbooking, movies, and sports, all fit the bill equally well.

You would think we would reach another conclusion. But that would require thinking. If I am working my butt off 40 hours a week all for the privilege of falling exhausted into bed each night, ought I spend the few precious hours I have of LEISURE in figuring out how I can better my lot, how we all COLLECTIVELY can better or lots?

Or stated another way? Is somebody or something making my life like this because it makes their lives better?

That is the stupidity of much of our citizenry. They have been lulled by a consumer “shiny object” to reach for the latest IPhone rather than Plato, a new recliner with built in snack tray rather than a book of poetry. None of these diversions are wrong, they are just the entirety of our leisure time and as such they serve to keep us stupid and ready prey to the Palins and the Murdocks and the Kochs of the world.

We may hear the news in the background, but we have been drugged by the seductive tones of “it’s all their fault” of all too many self-serving politicians and journalists and pundits who make a good living off misdirecting your anger and frustration. It causes you to do stupid things, like vote for an increase in minimum wages while at the same time voting for the guy who has campaigned against it. You don’t even know enough to know that. The sound bites just convinced you that Democrats are all socialists now and just give stuff to lazy people.

You know almost nothing of importance or value to the conversations we are not having but should. You have opinions and account them as good as facts. Truth is relative you claim to each of our life experiences, when everyone knows that the people who eschew that remark are the evangelical preachers who tell you that truth is never relative, but can be found perfected in a book that they will interpret for you, for a price.

As I pointed out to another. I would not give a rotted carcass of caribou about your stupidity if you would just have the nicety to keep your ignorant ass away from polling stations and let people who do care take care of the country. You would in the end thank us and be grateful for the better life you would have. But no, you meddle in affairs you have no idea about and make it infinitely harder for the rest of us to make the world a decent humane place.

Since I cannot logically argue for disallowing your vote, I can only rail at your failure to inform yourself of the truth. Get off your lazy dumb ass and learn something. I’m serious. You are stupid. 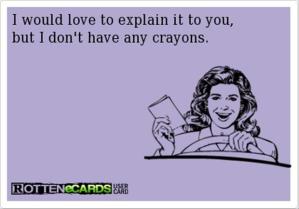