crap I didn't learn, crap I learned, life in the foothills, lifestyle, musings

I find the human condition dizzyingly complex. I’m not sure we’ll ever get it sorted out. I’m reasonable sure that you have to be slightly off (if you get my drift) to study the human mind, and I’m very sure that prolonged study causes intense breaks with reality meaning that research results become suspect the minute they are conceived.

I mean, I am one of your more ordinary types of “scheduled” persons. I do a whole host of things as part of a routine that can become quite rigid. I walk the dog at 6 a.m. If the weather does not cooperate, but it’s sunny and lovely at 9 a.m., well too bad dog, that window has closed until tomorrow.

If you have ever read a story whose main character is one of those routinized humans who eats the same lunch for twenty-five years while sitting on the same park bench across the street from their work location which is a tiny cubicle in a corner from which said subject does some routine mundane same-old-same-old day in and day out for forty-three glorious years returning home at precisely 5:47 p.m. to one of five carefully arranged TV dinners and then two hours of knitting before climbing into bed at the stroke of 10 p.m. to awaken precisely at 6 a.m. to do it all over again, and equate me as one of those persons, well, you would be mistaken.

You would be deeply mistaken.

I revel in setting up systems of order, but true order is nothing but neurotic obsession. I like knowing that there is a time for every purpose under heaven, but find it serves me best by allowing me to ignore the chores I wish to ignore if fate delivers me some altered time line. You see, I use order for the gifts of avoidance as much a for the gift of organization.

I never met a routine that couldn’t be tweeked.

I never met one that didn’t need major revisions at least twice a year.

It is why I struggle to have “a” hobby, rather than eight or so.

It is why I struggle to add yet another great recipe rather the fine grouping that I already have of tested and true.

It is why I sit puzzling for sometimes day as to “what to read next” because there is so much to choose from.

It is why new thoughts intrigue me rather than bore or frustrate me. Dazzle me with your ideas for my brain loves the challenge.

Why am I not satisfied with a job well done, repetitively? Why am I on this unrelenting quest to master yet another THING?

It may be part of what makes us human, or at least most of us? More than some of us at least, for I live by the theory that I am only original in my sum rather than my parts.

We are driven to conquer new things, we humans. It is what has taken us to the moon, Mars and beyond, which powers us to the Mariana Trench and to the North Pole. From this thing inside, we decided we should be able to fly like birds, and go faster than horses at a full gallop. It propels us ever onward, never satisfied with what is but rather focused on what might be.

I am not Einstein, nor Picasso; no Sophocles am I, no Hypatia, Gertrude Stein, or Curie. The drive to do something new is not limited to only the brightest and most noteworthy inventor or sophist  but resides somewhere beside that reptilian remnant in each braincase.

There is percolates a constant insistent demand or remains dormant throughout most of its life, or somewhere in between. What awakens it, or dampens it, whatever the case may be, is unknown to me for sure. It just surely is in me a sometimes annoying nagging that never ceases.

So I go along in my routines sometimes happily for weeks, until it’s just not enough, and I scrounge around seeking some new challenge. To read the book I’ve long avoided because it was too hard, to attempt a new hobby or take an old one up a notch. To master something new, to add to my resumé offered with the last breath to the only possibly interested entity who common sense (let alone great theologically pondering) tells me has no such interest.

Yet I am so compelled as are countless others, to do SOMETHING, to create, categorize, expand the realm of knowledge, point out the failings of planetary systems be they political or religious. We are all compelled to DO, for no very good reason at all. After all, I am by thinking said Réne. What more needs be said or done?

This is not something morose and melancholy. Whatever you believe about God and death, it accommodates all. What is is, what will be will be, and not much I do changes any of that. But still I do.  Do that is. And with a happy and challenged heart for the doing excites and exhilarates, giving satisfaction beyond the completion of the thing itself.

I should much like to ask a chimpanzee if they experience this sort of thing at all. Is it better not to? I sense not, but I know not either. Perhaps there is a peacefulness that comes from life being sorted out ahead of you and only to be followed with death’s appearance earlier if you slip off the path into the gaping jaws of someone higher up the food chain.

Anyway, I’m busily re-organizing and it’s all so exciting and thrilling to have new challenges. For me it’s biking instead of walking and cooking in a new way driven by a body who has said “enough of that” now nourish me properly. It fills the days with a new expectation, new roads to travel, new discoveries.

The Contrarian views this all from his perch. His “drive” is significantly subdued. He chuckles a lot at my fever pitch, supportive but in his own comical way. He loves this new biking craze I’m starting. “Oh, my, but ANOTHER thing you will grow to hate to do every day!” But as he says, you may hate it but you can be damned determined to do it anyhow.

I am a closet full of discarded crafts away from being the most productive person I know.

So how weird am I?

Really, you can tell me. 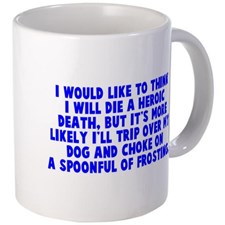 7 thoughts on “I Think Therefore I Suffer”