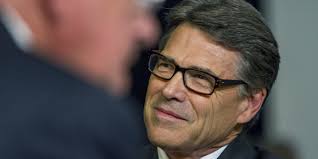 Ricky (I got my Smarty glasses) Perry wants to be President, mostly to prove I guess, if we were not already aware (Dubya (I’m a painter now! Bush), that dumb can rule the free world too.

Ricky (I can only count to two) got his good-hair self caught up in a scandal, one of major proportions. Indictment for a CRIME, one that carries up to 99 years (doncha love how they always go one shy of 100?) to be specific.

The crux of the indictment is that the Rickster made a line-item veto in a bill, refusing to fund a state prosecutor’s division whose job it was to investigate public malfeasance. This was a unit run by a Democrat named Rosemary Lehmberg. Perry made no bones about the fact that he wanted Lehmberg to step down.

This might seem sinister since it could be seen as Perry’s attempt to shut down investigations regarding himself or those around him for behaving badly.

However, such does not seem to be the case. The reason for Perry’s actions seem to be the bad behavior of Lehmberg herself who was arrested for drunk driving and went on (with all the video anyone would like to see) to act like a belligerant, “don’t you know who I am” sorta brat. It is quite arguable that Ms. Lehmberg doesn’t deserve a position when she acts like a horse’s ass in public and abuses lawful police actions because she thinks she’s “above all that”.

Republicans of course are screaming that the whole mess is a political witch hunt designed to take down their Texan favorite son. Which would make sense, except that:

(1) the judge who appointed the special prosecutor who sought and obtained the indictment is a Republican, and

(2) the special prosecutor is also a Republican.

(3) Ricky is so damn dumb that nobody needs to help him off the cliff, he’ll trip and fall all by his silly self.

That being said, it looks to me at least that Perry is getting a bad rap here.

Firstly, the governor retains the power of the veto in the fairly insane state of Texas and it seems rather obvious to the mentally sound that veto implies threat by its very essence. It shouts to it’s target, “do what I want, or I’ll kill ya!” which by anybody’s estimation seems a bit intimidating.

So claiming that Rick was threatening Ms. Lehmberg seems more like a “duh” moment than a basis for wrongdoing. It comes with the territory. Rick (please run all mouth speaking through my handler) would have been better to shaddup, but people with special smart glasses have a tough time doing that.

Now the county from which the indictment arose is that one around Austin (the lair itself), and one of the high volume Democratic counties in the late-great state. So I suppose it’s possible that the grand jury was over-filled with Democratic citizens who handed the special prosecutor the surprise of his life in voting for the charges. He, (the now loathed Republican prosecutor) was quite possibly just goin’ through the motions, never anticipating that any group of citizens would “take him seriously”.

That being said, it all seems like a bad idea. There is little to be gained by the Democratic party as far as I can see, but I suspect that there is little to be gained or lost by the aging pretty boy. Everybody in his party is making sympathetic mewlings about what a gentleman he is, but soon they will all return to their own private interests which may or may not include trying to cut him down at the knees to further their own political fantasies.

As they say, “move along, there is nothing to see folks.”

Don’t get me wrong, Perry is a farce, and has done a whole ton of things that are reprehensible in my opinion, first and foremost revolving around health care in general and women specifically. He has systematically let his citizens suffer to maintain an ideological idiot’s position regarding health care period, and leads a state who has more uninsured than any state in the union. This he has done deliberately.

If he once had compassion for children who found themselves brought to this country as small children and argued that they deserved an education, he was disabused of that position by a slathering, spittle spewing right wing who nearly booed him off the stage for his heresy. Since then he’s been a hardliner when it comes to immigration issues, again, probably much to the detriment to his state.

That being said, this indictment still reeks of STUPID.

We got better things to do folks.