I live in perpetual confusion.

I’m pretty certain that it’s the best place to be.

My mind is never at loose ends, with nothing to think about.

I have a long list of confusing things I can call upon at a moments notice to occupy the time.

I’m not sure I’d want to not be confused. It would mean I was a fundigelical (fundamentalist/evangelical). They are not confused about anything they tell me. They are quite sure all the answers are in one book, and they find it not the least confusing.

But it’s not because the book (the bible) is not confusing, for it is and has been for as long as it’s been deemed a “book” to all the people who actually are paid to figure it out and have prepared for years to be knowledgeable about all the stuff one needs to know to well, know.

No, it’s because they don’t have a confused gene in their brain. See, we regular folks have a confusion gene. It enables us to know that two things don’t add up and thus are C O N F U S I N G. See how that works? A gene in DNA enables you to discern that shit don’t go together. Like gasoline and a match or like a cliff and the continuation of a road. It’s an important gene, for it helps us survive.

I’m not sure how fundigelicals survive. That confuses me a lot. 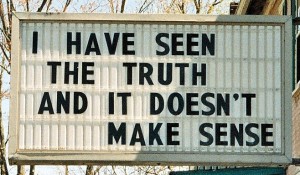 Another thing that confuses me is that many of these fundigelicals think that poor people are lazy. Now, that is not true for the most part, as most of us know, but fundigelicals insist that it is, and they sure aren’t confused about that. I think they found it in that book some where, or they think they did. In any event, they want poor people to get jobs.

Well, that logically follows I guess.

Except that these same fundigelicals don’t want employers to have to pay a fair and living wage. They are, mostly at least, very much against raising the minimum wage to a “living wage”, meaning a wage that allows a person to pay their bills and ya know, eat, and take care of their families. The fundigelicals say that this impinges on a employers right to pay what they want. And they add that some jobs aren’t worth a “living wage”, they’re just starter jobs, ya know, to wet your toes on.

So the logic  goes at least.

Ya see, a job is a hard thing to learn. Any job it seems. And it seems that even though every job requires very different things such as placing a round thing in a round hole, or screwing something into something else, or making change, or painting between the lines,  reading and finding errors in a manuscript, or taking out a heart and putting in a new one (well not new actually, but newer at least). See? Lots of different things.

But somehow, there are “universal” things about jobs that need to be learned, and no employer, so the theory goes) should be asked to pay much for this learning curve. The first employer gets stuck with teaching these “things” and he should get a break for doing so.

I guess that’s what it means.

What are these “things”?

Get up on time?

Maybe, but getting to school/the bus stop/the car pool required that as children.

Yep, but mostly we learned that stuff in school too. Wearing the wrong things got ya sent home, or mom scurried to school with the “right” clothes.

Doing your own work?

Ummm, teachers usually took care of that with various forms of discipline.

Not talking about non-business related subjects during work time?

Kinda like not talking in class when the teacher is talking.

Oh I got one. Learning to punch the clock!

Yep, that takes wow, better than 30 seconds if you go through it twice.

What to do with a paycheck?

Well, if you’re not sure, pin it to your pocket and give it to mom like at school.

See? I’m out of “things” to learn on the job, other than the SPECIFICS OF THE ACTUAL JOB WHICH HAS TO BE TAUGHT AT ALL OF THEM.

So I’m confused, by why you don’t want people to get a living wage.

Since you want them to work to avoid being on the dole, so doesn’t it MAKE SENSE that it actually be ENOUGH TO NOT BE ON THE DOLE TOO?

Which is what Wal-Mart does, not pay a living wage so better than one half of their employees work there and STILL have to use government assistance.

You see my confusion?

I’m told there is this thing called a “smart gun”. Through some magic, it won’t work except for the person who bought it and owns it legally.

It would seem that if all the guns were eventually of this type that trafficking in illegal guns wouldn’t work. You couldn’t buy a working gun “off the street”. You couldn’t break into somebody’s house and steal their gun cuz it wouldn’t work. If you disarmed a homeowner defending his home against your intrusion, you couldn’t use it against them, except to hit them with it. If your kid found your gun, he couldn’t shoot himself or his best friend by mistake.

The NRA is having babies of hysteria over this thing.

They are the people who claim that the only way to deal with bad guys with guns is for good guys get guns. So they want to sell all the “good guys” guns.

Except they don’t want any checks of any sort to determine that good guys are actually good. Wouldn’t it make some sense to know that first?

And they don’t want smart guns that only fire for the good guys.

I’m really confused about this one.

I guess Wayne La Pee Pee LaPierre doesn’t have the confusion gene either.

So, anyway, I could go on. Reams later, I would only have scratched the surface of stuff that is confusing. Time dilation could take days all by itself. So, I’ll just stop here.

I hope you are confused now.

Really, it’s the only sane place to live.

10 thoughts on “It Doesn’t Make Sense”