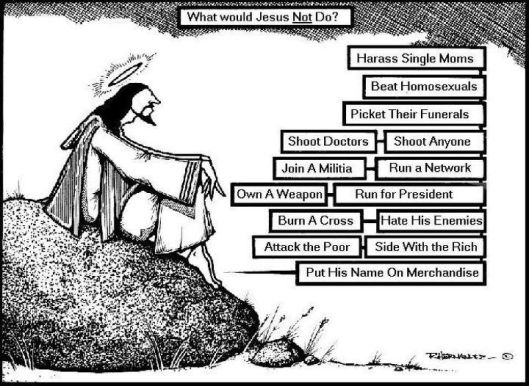 A sweet sounding word. Like a crispy hippo maybe?

Oh, sorry, words do that to me sometimes. Just love the little buggers.

Back to hypocrisy, which as you know is not a good thing to be. Hypocritical that is. Or to be: a hypocrite.

Defined as:  a person who claims to have certain beliefs and/or values, but does not actually live by them.

The world is full of ’em. And to go by what I see, most of ’em don’t seem to know that they are such. Which leads me to the conclusion that people who are hypocrites are not very good at thinking.

See, the reason most of us aren’t hypocrites is that we rather immediately see that our beliefs and actions aren’t lining up, and we work pretty fast to correct that, lest we be called a . . . .wait for it . . . . H Y P O C R I T E !

We have talked many a time about the religious right, the fundamentalist, who proclaims Jesus as their savior in a very earnest voice (God bless!), shaking a tattered bible in one hand while doing so. One would wonder if the tattering came not from reading but from all that shaking of it, given that said fundamentalists mostly do not practice what they preach.

You see, it flies in the face of their emotional attachment to themselves and their desires. So the Good Book is twisted and mangled until to them at least it says that the poor should get off their lazy butts and get a job, that gays should give up sex because it’s nasty “their” way as God sees it, that the rich are people whom God obviously loves since a free market is right in Luke, if you just read that parable about the landowner paying different wages to his workers. God loves him some weaponry too, as Jesus said, assault rifles with big clips are part of everyone’s attire to go shopping at the Wal-Mart. And let’s not forget dear Sarah the Bible hugger herself, who just a few days ago reminded us that to a “real” Christian like herself, why waterboarding was just baptism for Muslims! Can I hear an Amen?  The list goes on, but you get the picture.

Why we have the fine example of one Cliven Bundy who it seems figures that he should be able to graze his cattle free of charge on government land. Said hypocrite then went on to ‘splain to all of us stupid people about them “negroes”, and what ails them. It seems that those “negroes” sit around on cement porches all the while they wimmin’ are abortin’ them young chillen, and they be sending their young men to prison. All cuz, they have no DIE-RECTION in life, which is cuz the feds are givin’ them those SUB-SITIES.

See that’s how Cliven sees things, and Cliven sits atop a horse so he can see a far piece.

All the while, Cliven of course don’t think that he is getting any SUB-SITY all the while grazing his cattle on someone else’s land for FREE for TWENTY FREAKIN’ YEARS.

See that is whatcha call hypocrisy.

Now the Rightie-Tighties were all in favor of Cliven at first. It was just wrong for the Government to OVER -REACH as Sean Hannity told us. I mean forget that it was RONALD REAGAN who signed that EXECUTIVE ORDER way back that was the source of Cliven’s pain. (can I get two hypocrisies?). Forget that. It was wrong, Sean said for the big bad government shouldn’t show up with guns to take the cattle. I mean, it’s only grass for God’s sake, and who should care? I mean Cliven is just cheatin’ the gov’mint out of a little bit of taxes. Ya know.

But then Cliven opened his pie-hole and forgot to use those racial code words but just spoke out the truth as God made known to Cliven, and well, all those rightie-tighties started backin’ off.

Sorry Cliven, you aren’t a very good person, but the idea was still worth supporting, however you might be.

And some said it was REALLY about the dang government havin’ that land in the first place. All that eminent domain stuff. I mean seriously. Just another instance of the gov’mint having stuff it don’t need unless it wants to run your life.

Cliven could have that land iffin’ the gov’mint weren’t grabbing it all, to “protect” it and stuff, from lawful use by say, yer gas and oil interests. Yeah, just another example (eminent domain) of gov’mint messing with capitalism. Next step: socialism, which we are already nearly there so, safe bet you can say C O M M U N I S M !

Oh, nuts, did you hear any of them rightie-tighties talking about the evils of eminent domain when it came to the Keystone Pipeline? You don’t really think that thing is going only through land owned by the gov’mint did ya?

There there is Donald Sterling, a man with a name that in no way describes his character I tell ya.

Donald is an old fart, I mean old. And like a lot of old farts, he has hisself a young mistress, cause he could afford to buy one. And she is exotic, meaning that she has a heritage that would be called “mixed”. She claims she is part African-American and part Hispanic. Donald don’t mind, cuz only the Hispanic part seems to show much, and that is still okay among his white old fart friends.

But this cute little thing is pissin’ Donald off, cuz she’s “hanging around with black people” in public, sorta like “pallin’ around with terrorists” I suppose. That makes Donald look bad with his white old fart friends.

So he told her to knock it off. She can bring ’em home, f**k ’em, feed ’em, and do anything else with THEM, but NOT IN PUBLIC. A bit of decorum you NOT WHITE TRAMP PLEASE!

All the while Donald owns the Clippers, which is coached by an African-American and whose players are mostly African-American, and their SUCCESS reaps him tons of money. Hard to figure how that can happen when Cliven ‘splained that they just sit on porches all day. Guess Donald was given them plenty of DIE-RECTION or somethin’.

And I bet ya, I just bet ya, though I am just speculatin’ that if you check on his right ass cheek, you will find GOP emblazoned there.

8 thoughts on “Oh the Hypocrisy of It All”