Humor, life in the foothills, lifestyle, stupid people I meet 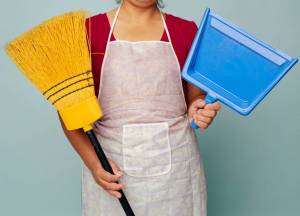 I think I mentioned it.

I have a new housekeeper.

She started last Thursday. She was an hour late. Not a good sign.

She’s due again today. In about ten minutes.

I’ve had a housekeeper before.

It was years ago.

She came and went while I was busy trying to extricate various criminals from the long arm of the law.

I have no place to escape from now, being “retired” and all. I feel “in the way” in my own home.

Now you have heard it all. Complaining about the inconvenience of having a housekeeper.

Don’t I just beat all?

But since I’m doing such a bang up job of complaining, why stop now?

A couple of days ago, I stopped by the local grocery to pick up a few items to drop off at the church.

I had two large bags of paper plates and two large boxes of plastic silverware. They were slightly unwieldy but I had not thought to grab a cart. I balanced them precariously as I made my way to the express lane.

Of course upon arrive, I found two people in front of me.

Of course, one of those two persons, a somewhat elderly lady, (you know the kind, they take forEVER to write a check), apparently had a good case of the counting disorder.

As in, how does six filled plastic bags in a cart = fifteen items?

The man behind me, who had no where near fifteen items, but did have the intelligence to have a cart, grinned as I whispered, “creative counting”,  all the while threatening to dump my silverware into the Lays Potato Chip display. I was threatening that is, not him.  He grinned and offered the usual manly helping hand.

“I bet you didn’t know that items of the same type, i.e. bread count as ONE no matter how many loaves you actually have, did you?”

“Yes, but that’s just the beginning of how you get to fifteen. You can use the “all breakfast items are ONE”, all non-foods are ONE, all fruits are ONE. I mean do you count a bag of six apples as six? Of course not. No reason to count a grapefruit as an individual thing when it’s really just a different looking kind of apple. Or at least it could be called generically a citrus.”

By now, a second all you can stuff up your shirt lane had opened, and my best check out clerk was at the helm. She motioned me over and I gratefully dumped my load on her counter. “Do me a favor,” I intoned, “have that sign changed to creative counting, or How to make thirty-two items into fifteen.”

She laughed. “Honey, I can tell you that I’ve seen far worse than thirty-two in my day.”

Adventures in the Express Lane. It would make a good book title.

Which reminds me, I have an acquaintance who hasn’t a clue what the difference is between stupid and ignorant. True to form, she refuses to look either up to become informed. This borders on being both at the same time, or as I define it:

Being stupid is being ignorant and then opening your mouth and letting the whole world in on it.

Speaking of which, stupid or ignorant, that is. I have another story of small dimension.

I’ve been having the hair-pulling joy of trying to explain evolution to people who are very sure that God did it all in six days, and just 6+ thousand years ago. I mean it drives sane women to drink to engage in this sort of baby steps approach to human learning.

So after link after link of “here are tons of real biblical experts, and here are lots of theologians, and here are honest to goodness WHOLE Freaking Churches who know there is no dilemma between science and God, all I can arouse from that creaky rusty brain is:

“Well, no matter what you say, I still will never believe humans come from monkeys! I mean monkeys are still having monkey babies, aren’t they? Show me one that had a human baby?”

Well, slap my face and show me whose boss! 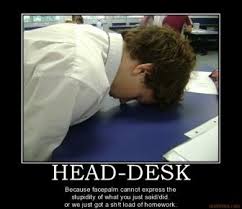 I’m relatively certain that God reserves the best accommodations for those of us who maintain a straight face (online of course) to that type of remark, all the while not shouting from the roof tops–STELLLLLAAAAA I MAY JUST HAVE FOUND THE MOST INSIPIDLY STUPID PERSON ON THE FACE OF THIS PLANET.

It raises the real specter that indeed there may be people in this world not worth educating, but rather just consigning them to bottle Soylent Green in dark factories, allowing them to scurry to underground caves for their rest and meal of gruel. Only allowed to procreate under adult supervision. Ew, that sounds gross doesn’t it?

This was followed by the following episode of “Aw, come on, I really can be dumber than a whisk broom”.

I asked the reasonable, (or so I thought) question which went something like this:

Given that 71 children under the age of 12 have died since Newtown, the result of negligent gun ownership by adults, would you agree that at the least we might try background checks just to see if we can keep guns out of the hands of people who can’t be trusted with them and thus prevent needless deaths?

The answer I got?

“Sherry, just because you think that will prevent them,  is just your opinion. There will always be children dying you know.”

Yes, and horses will continue to defecate at will, but I can keep them off the kitchen floor can’t I? But I do wish to offer my condolences. I understand that when the right and left brains are severed, some people manage to develop fairly normally. Sorry that you weren’t one of them.

Just to prove that I have a sense of humor, I leave you with another Contrarianism. Those who read regularly know that sometimes, nothing beats a Contrarianism, or Sometimes you feel like a nut.

So, out of the blue the other night, I got asked this:

“So did it take you a long time to get used to wearing those shoes?” referring to my flip-flops.

“I tried them once. Got horrible blisters between my toes. Just horrible.”

“No doubt you did. I’ve been wearing them since I was a kid, ” I sighed, not knowing what else was coming.

“Anybody with a brain would know that you don’t shove something between your toes. That’s why there is a between . . . .to protect the between part. I mean that’s obvious, right?”

I’m done. Return all tray tables to their upright positions.

ADDENDUM. The housekeeper just called. Can’t make it. Probably is passing kidney stones. Pray for her. Forgot all about her job. Doctor said it’s probably kidney stones. Going to doctor. Pray for me.