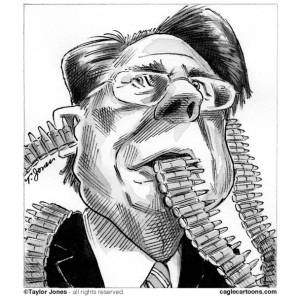 Part of me secretly snickers at how the NRA, along with all the Right-wing elites, (read Fox, corporate interests, and GOP politicos), play their audiences for a fool. I mean to the rest of normally functioning America, you are always saying, “how can people be so stupid to not get it?”

Oh, get that the Right-wing elites get the little people, mostly working class but definitely middle class wannabes, to do their bidding. They do this by such blatant lying and cursing of the truth, that, well, it only works if you are burdened with a lack of grey matter with which to discern reality.

I mean, face it, smart people are not listening to Fox, only those who are (how can we say this delicately?) intellectually challenged respond to that crap. It’s really a combination of lack of intellectual acuity and lack of interest in well, thinking, that motivates the average working Joe to “just let Fox do it”–the thinking that is.

How else can you explain Wayne’s rant at the NRA conference and the illogical crap he spewed to ears who can hear, but alas cannot decipher the message?

Wayne says, (not wanting to exploit a tragedy of course), that the poor people of Boston “cowered” behind their locked doors, wishing for all they were worth that they had guns with which to protect themselves against the monster bombers roaming the streets.

Now such a statement defies intelligence. Boston has no laws against the ownership of firearms. Everybody in Boston prior to the bombing there, has all the firearms they wanted. Nobody was cowering without defense unless they were of a mind that ownership of firearms was not a thing for them.

Now Wayne is not stupid. Insane, maybe, but not stupid. He knew that. He knew nobody in Boston was wishing they had guns. If they had wished such a thing, they would have bought one, or many. But Wayne is talking to stupid Teapotters out there. And frankly one can’t assume they don’t know this. For Teapotters think that background checks = national registry = confiscation of guns=abandonment of the 2nd Amendment=last step before communism=end of the world. They truly do believe that. They believe it because Fox and Wayne have told them so.

And as one listened to the endless parade of new civil war mongering that passed as “speeches” at the NRA convention, one cannot help but understand that these people really truly don’t know any better. I’m not sure that one of their survivalist “stores” isn’t designing the Teapotter uniform even as we speak, in anticipation of the coming militia call-up ordered by Wayne and his band of boobs.

Which is all kind of amusing since Kelly Ayotte is scrambling to make herself “understood”. See, she really does support background checks. Really, really, really. It was just the mainstream media and it’s awful use of “tapes of her answers” that got everybody all confused. Or her explanation that background checks would impose burdens on gun sellers that was unfair, that got taken out of context–the context being the word salad she wallowed in while trying to figure out what to say.

But Ayotte too is well aware that she is playing to a weak audience. She raises the NRA claim that those persons denied the right to buy weapons under the current NICS system aren’t prosecuted enough. That is a straw argument and Ayotte knows it, although she hopes her audience doesn’t. She calls all those rejected by NICS as “criminals”. They aren’t of course, they just don’t qualify for gun ownership. She bemoans that this is the problem with the system–police and prosecutors aren’t using their resources to prosecute a person who the system has successfully prevented from buying a gun. I mean wow, better they should get that year’s probation while the rampage of house break-ins continue from lack of police power. There are priorities and then there are priorities!

Meanwhile, Jeff Flake from Arizona has had a change of heart as well. Likening his popularity in Arizona to that of “pond scum”, Flack now alleges that the reason he opposed the legislation was that it made it a “commercial sale” if I emailed you and said I had a gun and would you like to buy it. Jeff is now sure that “that can be worked out” and he had happily join the majority and vote for background checks.

I rather think that his resemblance to pond scum had a lot more to do with his decision than did the flimsy made up email crap.

While the NRA continues it barrage of hate spewing and fear mongering, it seems that the tide is turning. Frankly nothing points that out more clearly than looking at who spoke at the NRA and who didn’t. Rick Santorum? The “don’t forget me,”  girl, Sarah? Glenn “I’m madder than any hatter” Beck? Surely you jest?

With a lineup like that, I mean does it say it all? Where were the Rubio’s? The Graham’s? The Ryan’s? The Cantor’s? Where were they? Oh, they quietly whispered, “gosh darn Wayne, you know my heart is with you, and I’ll work tirelessly behind-the-scenes, but I can’t AFFORD to publicly support you. You understand. Elections coming. Can’t rile up the folks now can we? *wink*wink*nudge*nudge. Just don’t ahh, mention that you invited me okay?”

Did I mention that we, the sane ones are NOT GOING AWAY this time?

Did I mention that?

You heard me? I don’t have to shout?

PS: I hear that some of these boobs are calling for an “armed march” on Washington on the 4th of July. Good luck with that.