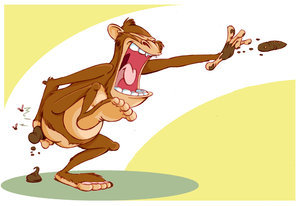 Yes, our little Lord Fauntleroy is having another tantrum. Lindsey has apparently missed the fact that (a) the election is over and his side lost and (b) the tea baggers are not sophisticated to understand that he is no longer a MODERATE and is one of them, (at least until his next election). He continues to wring his hands with plenty of “oh what to do, what to do” as his hankie waves desperately.

Usually it’s enough that Johnny S tells him what to do and Lindsey dutifully says, “yes Johnny boy, whatever you say, oh you cute old grumpy drawers,” but as they say, fear is a powerful thing. Faced with the serious threat of being “primaried” Lindsey has looked down and started to see a Johnson actually peeping out of his nether regions. It may be a tiny Johnson, but according to the pictures he’s seen (on THOSE sites on the Intertubes), he’s pretty sure it’s  a real Johnson all right.

And well, he is in a full-blown episode of the vapors. “Lawdy, lawdy, what ever shall I do without that fine old office to nap in on the Hill?” What would Truman Capote do at a time like this? Write a book?

Anyway, dear old Lindsey is threatening to hold up the nominations of EVERYBODY until he gets his way. After all, he’s can’t come up with anything else to raise cain about since nobody has yet called for him to come down and ride the Queen’s float in the Mardi Gras festivities. It is apparently also insufficient that Lindsey has been named as the proof positive that Darwin was wrong. The Smithsonian has promised his brain front and center status at his demise, or sooner since he has little use for it anyway.

In the end, we see, Republicans are in such a feeding frenzy of their own, that all good people globally need only sit back and watch the festivities. Popcorn anyone?

Meanwhile, over in the United State of Zooniville (once referred to as Arizona), the good Sheriff of Stupidham, Joe Arpaio, who arms anybody who shows up and calls them “volunteer deputies”, has set aside the important business of birther investigation (well he MIGHT try for a third term ya know), and has taken up the cause of “protectin’ the lit’lins in our scools”. Yes, none other than ACTOR Steven Segal, ACTOR if I forgot to mention, has been called upon  to LEARN the gun-happy volunteers how to strap up, and catch them some crazy. Maricopa county, Zooniville now has some 3,500 of these folks, loaded with clips and weaponry sneakin’ around every public place, demanding “lemme see your hands! On your knees! Spread ’em”.

If you contemplate a vacation in the area?

The NRA may be one of the greater collections of sub-human examples of what Darwin got wrong. Beyond La Pee Pee Pierre, there is this delightful jackass who spoke at the NRA Wisconsin State Convention, one Bob Welch.

Welch is mighty darn sure that there will be no gun legislation of any kind, because of course, that can’t happen until it’s okayed by them, and they are not okaying a damn thing except more rhetoric that you all better keep buying every gun in sight, cuz, well, you know why.

We have a strong agenda coming up for next year, but of course a lot of that’s going to be delayed as the “Connecticut effect” has to go through the process. […] What’s even more telling is the people who don’t like guns pretty much realize that they can’t do a thing unless they talk to us. After Connecticut I had one of the leading Democrats in the legislature—he was with us most of the time, not all the time—he came to me and said, “Bob, I got all these people in my caucus that really want to ban guns and do all this bad stuff, we gotta give them something. How about we close this gun show loophole? Wouldn’t that be good?” And I said, “no, we’re not going to do that.” And so far, nothing’s happened on that.

And in 1999, you blowheads were ADVOCATING complete and full background checks.

Tell us again that this is not about your conspiracy-under-every-bed ideas that the Black guy in the White House is gonna declare himself king and take away all your guns? Tell us that, huh?

Go do that impossible thing to yourself will ya?

While we have plenty of examples of private industry attempting to lower the number of hours worked by their employees to under 30 hours so that they can avoid providing health care (Applebees, Olive Garden, etc), the state of Virginia through its budget plan seeks to do the same thing. This appears to be the first incidence of a Republican led state intending to hurt its citizens in order to vent its anger at Obamacare.

As citizens of those states see that their counterparts in other states continue to receive health care, I believe that Mr. McDonnell and his band of Republican light-heads will rue the day they tried this little trick.

Republicans have long forgotten exactly WHY they are elected in the first place.

I gotta tell ya, my phone has been ringing off the hook ever since the news hit.

Yeah, he’s heading off to soak up the sun along the Riviera.

Anyway, everyone is begging me to give ’em the scoop on who will be the new Pope.

Seein’ as how I’m Catholic and all, and well Bennie calls me nearly every week. . . .

Well, il papa John Paul II, was an ultra conservative, and while clutching the throne of Peter, he hugely enlarged the College of Cardinals, and made sure that all his new Cardinals were of a similar right-wing persuasion.

So, unless the Holy Spirit jumps into the fray as in Vatican II (now gutted by humans who of course KNOW better than God), expect that the next pope will not be any more friendly than the last two when it comes to contraception, gay marriage, women’s ordination,  or anything along those lines.

You heard it here.