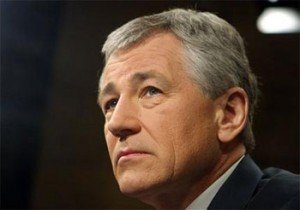 It appears that the President will be placing Chuck Hagel’s name up for nomination as the next Secretary of Defense.

Now, I’ve been burned once or twice by making knee-jerk reactions to who is on board and who isn’t. Pretty much I conclude that if Lindsey Graham is against something, I am pretty much for it. Nobody is kissing more ultra-conservative butt these days than Lindsey who is up for re-election in 2014. It explains his half-hysterical response to all things Obama certainly.

I also tend to trust my President on most things. He has proven himself to be a wily politician and usually has a good reason for what he does. It is not always apparent at the beginning, but in the end, his decisions are more right than wrong.

So, I’m inclined to support the nomination of Mr. Hagel, even though on most any other issue but foreign policy, we are in pretty clear disagreement.

And it is just not the likes of silly Lindsey that convinces me either. Hagel is despised by the neo-con community largely based on his pretty quick spin around on the Iraq war. Although he was initially for it, claiming that he believed the Bush folks that a war would be the LAST resort after ALL diplomatic avenues had been traveled, he was against the so-called “surge” and began holding the Administration’s feet to the fire.

And it’s really hard for me to be against anybody the neo-cons are against because I find them rather blood-thirsty in their desire to remold the entire world to suit their vision of American’s playground. And of course, a whole lot of these folks have never pulled on a combat boot either. Hagel, I believe loathes war and thinks that it is the very last choice when all other methods have failed. He’s a believer in talking with as opposed to talking to adversaries.

But don’t take my word for it. There is an excellent story about Hagel that was written in 2007 when some thought Hagel was pondering a run for President as an Independent. It documents he feelings about Vietnam, how that ultimately shaped his political philosophy and how he now stands in line with people like Colin Powell, Zbigniew Brzezinski and others who would be termed moderate and internationalist in their outlook.

In my view Republicans continue to pick the wrong fights. If one recalls, it has been, until recently, the general rule that  a president gets his choices for cabinet positions without little or no opposition. After all, he’s the one who as to work with the cabinet and he has the right to have people he can work with and feels comfortable with. Of my importance is the fact that cabinet members don’t initiate policy, they carry it out. So the nominee’s opinions on matters of policy are not particularly important. The fact of the matter is, the Democrats have engaged in some of this stuff too, but I would argue, not nearly to the extent that the GOP does now. They view every nomination as a chance for them to stick it to Obama.

Well, it is Texas after all.

Newly elected Texas Senator, Ted Cruz, apparently didn’t get the memo that new folks should keep their mouths zipped most of the time and LISTEN.

He’s already babbling about things he has almost no experience with.

For instance, he’s ready to “shut the government down” when the time comes to debate AGAIN about taxes and spending cuts. He was probably in junior high when the GOP pulled it before, and it worked then, sooooo, why not this time?

Oh I dunno Theodore, maybe because we are just inches away from a terrible recession and trying VERY DAMN HARD not to fall back into that black hole.

He of course is of the Tea People persuasion and says, “what Washington doesn’t need is more compromise.” Yeah Theodore, that’s how government should work–by hostage taking minorities forcing the majority to go along with harebrained ill-thought out ( what am I talking about–thought out–they can’t think!) schemes that threaten the good of the country.

Theodore also has an opinion on Chuck Hagel–he will make war with Iran almost certain. And I thought Gohmert cornered the market on stupid in Texas. And then there is Perry. Is there something wrong with the water in the Rio Grande? Somebody ought to test that stuff for stupid.

Proving there is more than enough stupid to go around, an assemblyman in Virginia is introducing more stringent voter ID requirements in that state. The standard as Mark Cole understands it is this:

If Obama can win the state, then the state’s voter ID requirements are too lax.

Now I like a man who says what he means. Translation: Republicans can win in states where they cheat people out of voting. Yes, and so can Bactrian camels. I know Mark, that went right over your head didn’t it?

You know of the Heritage foundation? New toy box for crazy Jim DeMitt? Well he just got himself a new sandbox playmate, one David Addington. I hadn’t heard this before, but apparently Paul Krugman coined the phrase “wingnut welfare” for the concept that all the idiots who failed so miserably in the Bush Administration, are “taken care of” when they ooze away in shame for their public service behavior.

This explains Addington’s new job surely. Addington, you remember worked for Dick “the dick” Cheney during the Bush years and was instrumental in defining the broad ranging powers that Bush grabbed as Presidential prerogatives. Once the touter of extra legal powers for the president, in an ironic twist (and the GOP is all about irony ain’t it?), Addington will investigate the degree to which President Obama may have overstepped his presidential authority.

Yes you read that right. You don’t have to reread it. Trust me. These folks are crazy.