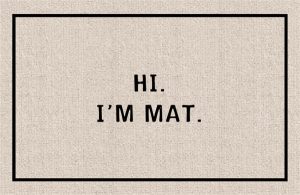 Much to my What surprise, the Contrarian returned with the lumber and a doormat! I praised him profusely as a good wife always does, and he replied, “I saw they had a long aisle devoted just to doormats. I thought I probably should just go to the end of the display and just stand there.”

“What a thing to say! I don’t treat you like that!” I exclaimed.

“All men are doormats, it’s part of the definition of husband,” he murmured, smiling benignly and handing me the knife he had just used to peanut butter his bread. With that he walked out of the kitchen.

We’ve done a bit of renovation here at Casa Peyton. We had sliding patio doors at the back of the living room leading to the patio. We were not keen on them. We now have french doors which I really adore.

I’m sure you didn’t notice, but the temperatures here have taken an ugly dip. Just another day, and things are going  back to the more normal 70’s during the day. Our walks in the desert have been decidedly chilly the last two mornings, but Diego seems to enjoy it immensely. This leads to our second renovation.

Diego is one of those animals that insists on having an ability to get in and out at will. If he isn’t granted an open door policy, he bugs you like every fifteen minutes. With the weather growing cooler in the morning and late evening, a solution was in order. Voilá, bring on the dog door.

Our intrepid handyman took care of the doors and the Diego door in a couple of days. It took Diego all of 30 seconds to understand the concept. He goes in and out so often that the Contrarian says we mis-named him. Frank Burns should have been his name (famous for his taunt to Hawkeye–“I can go in, I can go out”–when Hawkeye was under “tent arrest.”) We taped the flap up until he got used to it, and then lowered it while he was out, and he blew through like it was not there.

So next I figure to replace most of my counter. I have grown in a very short time to hate grouted tile counters. Food sticks in the grout, and it’s awful to try to roll out dough. So we are having it replaced for most of the kitchen. That sounds so unfun to live through but still it shouldn’t take too long to do.

So before you all leave in utter boredom, let me get on to something interesting.

Republicans remain clueless. The douchy-bag of all douchy bags, Joe Walsh, who was soundly defeated in Illinois, he is making noises that he might run for either Governor of Illinois or Senator. Yes, another pig just flew by my window! I’m sure Walsh will be successful too.

Nutjobs from 47 states are now petitioning the US Government to be allowed to secede from the Union. Texas is leading the way, but I suspect you knew that before I said it. They of course also demand a recount. Because of all the voter fraud. Which was not reported by any media. But then the media is part of the conspiracy to deny real Americans their rights. Except the right to petition the government for a redress of grievances. You might think that would be the FIRST right taken from them. Odd I would think. Key word is THINK.

A woman in Arizona ran down her husband in a parking lot because he didn’t vote. She blames him for Obama’s victory. They said she was sober. They said nothing about her sanity.

Tip to the GOP. Rule one in trying to solve your “Latino” problem. STOP CALLING PEOPLE ILLEGALS.

Sigh. . . .Ryan continues to live in the delusion. He of course blames the loss on “urban” voters, not issues. Of course not, everyone loved his tax plan.

A poor deluded man had Romney/Ryan tattooed on the side of his face. He is a bit disappointed at the results of the election, but hopes his tattoo may lead to some work in the “entertainment industry.” Yes, Jay Leno surely can find 30 seconds for him on one of his stupid human nights. I’m sure that will pay the rent for a couple of days.

6 thoughts on “The Other Side of the Oreo”