You all remember the story about the Romney dog right? Seamus was crated on top of the car and given the ride of a lifetime. The poor thing in utter terror, threw up all over his crate.

Now, I was reminded that some aggressive journalist was not the source of this story. Nay. It was Romney himself, written about in his book to show that he is a common man, not above cleaning up after the dog. No recognition that the dog was scared witless of course, that would be beneath his compassion level.

Well it’s the same for us. No compassion, just stern “tough love” is all he’s got in store for us. Well, we aren’t buying it. 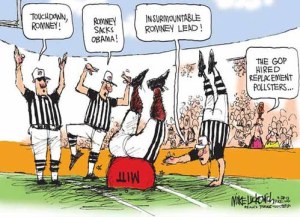 It’s kind of axiomatic that when you are really losing badly, you attack the people who are telling you are losing.

Such is the state of the Rut-Ro twins campaign. All the polls save Rasmussen which can sometimes be as much as 30 points off the truth, put Obama clearly ahead. Almost all have it outside the margin of error as well.

Even Foxy has reported Obama in the lead, obviously before it was informed that it was not to report such stuff, because the official right-wiggy meme now is that the pollsters are collaboratively skewing the polls in favor of Obama for reasons known only to Zeus and Poseidon, and leaked by mistake to Hera while she was cleaning the bathroom.

So, the GOP plans on holding a victory party after the election before they set up their shadow government in the Cayman’s. 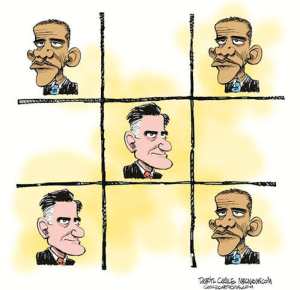 If you are polling challenged, then perhaps a simple game of tic-tac-toe will help to clarify the state of the election.

Now if this is still too complicated, let me say this.

Romoney (not a spelling error) has the following chance of winning:

To be fair, it’s not all his fault.

To be fair, it’s the fault of OhMittensYouSilly.

That is Willard’s alter ego.

He’s the nice one.

But he secretly knows that Willard won’t be happy as President.

There is no crown for the job, and Willard definitely wants a crown. He wants to clink crowns with the Queen of England. Before they sip tea with their pinkies sticking forth. He dreams of it every night. Ann says he often cries out at night, “Oh Elizabeth, you naughty girl you!”

But then again, Romoney has had some help.

See, it’s like this. Sometimes your medicine tastes really bad, but it does really good stuff for ya. Saying NO is the bad taste, but it will prove so beneficial once the GOP is back in the saddle. Trust them. They know not what they are doing, but they do it with élan.

Elan is a 1%’er word and means “doing with strong eagerness.” Sort of like how a puppy kisses ya. Just steel yourself against the bad breath and that  it still goes potty when it has to regardless of where it is.

I gots this feeling that the 47% thingie will end of being more memorable than the 99% thingie.

They are really a lot alike of course.

I wonder if Romney has ever seen the inside of an E.R. Maybe when taking Ann to birth them babies. But then again, perhaps the driver escorted her in while Willard went up to the suite.

Willard strikes me as the kind of man who washes his hands and washes his pee pee after sex. Don’t you think?

But of course, all that election business pales when it comes to what’s really important.

The real refs are back!

Not that I care much about football any more.

I always get that way when I learn that a “sport” ends of being a real danger to the people who play it.

All these guys risking their brains.

For a brainless game of brawn.

How come rugby players don’t get all the injuries? Am I missing something? 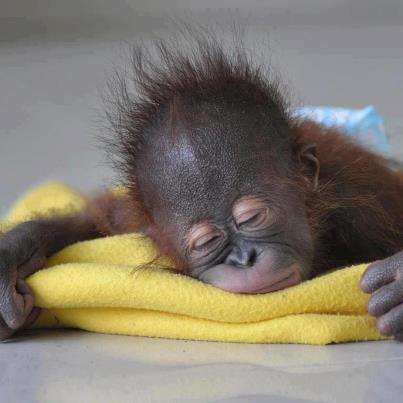 6 thoughts on “Weekend Endings and Fluffy Motes of Monotony”