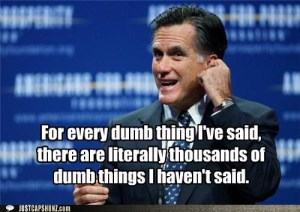 A few weeks ago, Willard talked to George Stephanopoulos wherein he stated that real boner: “the president has a tendency not to tell the truth when he talks about his opponents”. Along with that blatant projective lie, Willard lamented that he couldn’t use the “there you go again” refrain of his some-time hero, Reagan.

Willard, there you go again.

Desperate to find something to deflect the avalanche of criticism burying him, Willard is grasping at anything that “sounds” good to his tin ear. Instead of actually talking about WHAT he would do differently in some specifics, he instead continues his now-failed strategy of being offended at everything President Obama says and does as something antithetical to America sensibilities.

Why the President during his interview with Univision, remarked that one thing he had learned in his first four years, is “that you can’t change Washington from the inside, you can only change it from outside.”

Romney has gone all orgasmic over this remark and turned it into this on his next campaign stop:

The president threw in the white flag of surrender.  He said he can’t change Washington from the inside,” Romney told a crowd of supporters at a rally in Sarasota, Fla., immediately after Obama spoke. “We’re going to give him that chance in November. He’s going outside.

You know its coming don’t you?

He said the opposite, only five years ago when he was running against John McCain for the nomination. Yes he did. Almost word for word.

To be fair, in the Romney Dictionary, fair is defined as “that which will play to the crowd today.”

And of course context is missing here as well.

Anyone who has paid ANY attention to the President and what he has said in the last six months (and you can hardly accuse Willard and his band of loonies of not doing this), knows that he has spoken before about his disappointment that after the election was over he expected that the Republicans would behave like adults and sit down and work toward the common good of the country by giving and taking as normal people do.

He has also said in his second term he would use the bully pulpit as a tool more in forcing the Congress to stop dragging it’s feet and stop the automatic “no” to everything. It is clear that the President has recognized that a Congress that is at a dead stop because of partisanship can be moved only by the outside force of the electorate itself. He will call upon the people, to do their civic duty, and start pushing their representatives to either do something or expect defeat the next election cycle.

Quite frankly, that is our duty, one that most all of us have failed to exercise. Only about half of us even bother to vote at all, and then we dust off our hands and feel that we have been good citizens.

Any examination of the state of our country belies that conclusion. The country is a mess and our representatives in Congress are in a nice little club, funded by business interests, and they hardly bother to do anything other than make sure their coffers are full each election cycle, and that there are a few nice trips around to exotic places every year to offset the boredom of Washington and all those boring bills.

It is our responsibility to push these deadbeats into doing their work, our work really. If ever there were anyone on the public dole who not only don’t want  jobs, but enjoy sucking at the government teat, it’s politicians. We cannot continue to foist all this onto one man and then when he can do only a small portion of what needs to be done, accuse him of not “getting it done.”

Willard, we now expect, will change his position literally daily if need be to cater to the face in front of him. He will say whatever sounds good at the moment. Tomorrow it will be on to something new.

But when the election is over, things will return to the same gridlock if we don’t do our part. So start for voting and getting out the vote, and then make it a personal responsibility of yours to write letters, make calls, do what it takes to move whatever legislation you thing needs to be passed, through the set jello that is Congress.

6 thoughts on “Willard’s Brains are Turning into Cement”