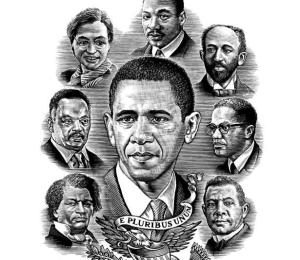 We’ve talked a lot here about the racism that seems inherent in much of the opposition to the President. It includes the overt racism expressed in placards carried by Tea People, the use of code words and phrases,the never-ending attempt to challenge his place of birth, the claims that he is “not American” in the sense that “we” are, and the general attempt to paint him as “other.”

No finer piece of work on the subject can be Atlantic had that this article written in The Atlantic by senior editor, Ta-Nihisi Coates, entitled Fear of a Black President. I think you would do well to read it.

Unless I am slightly daft (hey, don’t start now), The Economist would be what I would term a conservative magazine. It’s about Bizness after all, and business is mostly conservative.

Well, a more scathing article could not be found about our boy Willard. I mean they say that at this point they cannot support him, mostly because they have no clue what he believes in, and moreover they find many of his foreign policy statements actually dangerous.

It’s quite a indictment of the flip-flopping, principle-less Bain businessman who claims he can run an economy when he apparently can’t run a campaign.

If you been around here, you know I ain’t no fan of Rinsed Penis, Rancid Penis, or as his  momma calls him Reince. Chris Matthews took him to the woodshed about Willard’s use of the race card, naming the “birther” joke and his demonstrably untrue claims that Obama is removing work requirements for welfare recipients. You can watch the video of that confrontation on Morning Joe, here.

Now, I’ll admit that Chris goes over the top at times, and may have here, but when Penis gets his chance he proves the case when he accuses Obama’s stimulus and health care packages as things he “gets from Europe.” Rinsed was unable to see that he again as trying to paint the President as something “other” than American.

Worse, Willard himself has doubled down on his welfare work requirements claims, now stating outright that the President did this to “play to his base” apparently meaning that the President’s natural constituency are those who are on welfare. Now exactly who is playing to their base? And what is that base but the worst possible American traits of racism coupled with a lack of any sense of community spirit?

Gawker has gotten ahold of nearly a thousand pages of Romney family finances. Apparently it shows how the family money was placed in numerous off shore accounts, and used a variety of equity swaps, all to avoid paying taxes. Read the originals at Gawker or get the Grio’s take on the mess here.

Since the big old flap that Todd Akin started, the dick-in-mouth disease of male Republicans continue. Paulie claimed that rape was “just a method of conception” to his position that abortion is wrong in EVERY situation. And now the Virginia Governor, and one time VP wannabe, Bob McDonnell says that the GOP platform that echos Paulie’s position is just a “detail”.

Oh those pesky videos. If you are like me, and still trying to wrap your head around why Romneycare is super and “Obamacare” is not, well here’s another noodle for your spaghetti dinner.

It turns out that in 2008 when Willard was running for the Presidency, he actually was asked if he wanted to expand his Romney care to the nation and whether he really wanted all Americans covered by a national health care plan.

Yes he was asked, and he answered! This was back in the day when Willard answered questions with actual answers that related to the question. If you don’t believe me, well watch the video which suggests that Willard was all for these things but 4 years ago. Alas, the compulsion to be president at all costs does much to change the mind of a man with no principles.

Well, that’s it for today. Seems I’ve mastered the embedded YouTube at last. So the sky’s the limit now kiddies. Soon, I’ll embed odors in the post and then sweet kisses from puppies! lol