We continue to be subjected to white supremacist groups and nothing has changed much except that perhaps we don’t pay much attention to them, although their numbers have, I believe, been on the increase.

I’m not one to reprint other people’s work and dust off my hands, thinking, “well, there’s another post completed,” but Juan Cole is someone you should pay attention to regularly, both because of his superb reporting, but also for his superb analysis.

Usually I would point you to his post, but I think that it is better to reprint it here. Have you thought about how the press reports on incidents of internal terrorism? Juan has. And you should listen:

Top Ten Differences between White Terrorists and Others:

3. Doing a study on the danger of white terrorists at the Department of Homeland Security will get you sidelined by angry white Congressmen. Doing studies on other kinds of terrorists is a guaranteed promotion.

4. The family of a white terrorist is interviewed, weeping as they wonder where he went wrong. The families of other terrorists are almost never interviewed.

10. There is nothing you can do about white terrorists. Gun control won’t stop them. No policy you could make, no government program, could possibly have an impact on them. But hundreds of billions of dollars must be spent on police and on the Department of Defense, and on TSA, which must virtually strip search 60 million people a year, to deal with other terrorists.

Kind of brings you up short doesn’t it?

And it would be well worth your time to read about the culture of hate that is being cultivated in this country by the rich, whose interests are not at all patriotic but who use pursue Muslim hate as a means to frighten unsuspecting Americans into supporting them, and thus giving them the power base they need for their real agenda.

Believe it or not, there are wealthy interests in this country who have much to gain from continued and increased violence in the Middle East and elsewhere.

It’s disheartening yet predictable that sadly uneducated and malleable individuals can become enamored of hate-centered groups. It is more than likely that the latest example, Mr. Page, thought he was striking out at Muslims, utterly and stupidly unaware that Sikhs are not Muslims at all.

It is worse than disheartening when we hear various elected officials appear to fuel the fire by finding a Islamic jihadist under nearly every bed. The fact that most of these hate-spewers are Republican is probably predictable given their ties to the interests who would promote surreptitiously an agenda of war.

We cannot keep ignoring these people as irritating nuisances. They are dangerous and must be stood up against everywhere.

On a lighter note, Juan Cole has a lighter side: I thought this was cute. 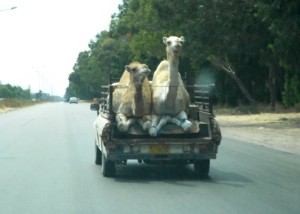 Photograph on road from Tripoli to Misrata, Libya, May, 2012, by Juan Cole