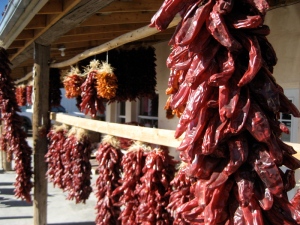 But this is the last post I’ll bore you with giving the details of our move.

It’s pretty much done. There are still a few things to be done such as get the windows done (in the works), put up pictures everywhere, and do the landscaping. But we are officially moved in. All the boxes have been opened and most are empty and off to the dump. The books are ready to be cataloged.

A few more deliveries and orders to be placed for a couple of chairs yet, a sewing machine stand, and yada yada, stuff like that.

We are looking forward to the 4th with a nice menu of grilled barbecued chicken with potato salad, pea salad, baked beans, and some cookie bars for dessert.

It’s been hot, but not so hot the last couple of days–only in the high 90’s. I understand much of the continental US is similarly afflicted, except most of the that has humidity added to it. The locals think 35% humidity is “muggy” but to us its just dry heat.

The Contrarian has a new desk top computer, me a new fancy laptop, and I got a Nook. I got the cheapest BW version, because that is the only one that works outside, the screen is still readable. We hired a kid from NMSU to set up our system so we can share files, wireless print and mouse, and download my smart phone pics to the computer finally. We have learned how to do the basics anyway, so we feel pretty darn tech-savvy. Yeah, right.

We discovered Pandora, and now I walk with music! Just a great time, and I’m walking faster. Today I figured I did a good 2 1/2 miles in about 52 minutes. I go at 6:30 am when it is still cool.

I’ve been keeping up with the news. The Contrarian tapes Chris Hayes, “UP” on Saturday and Sunday so I can watch them. We watch PBS News hour, and a bit of MSNBC during the day. Terrific about the health care act, and the Arizona Immigration Bil. Willard is still lying about nearly everything. Nothing much changes does it?

Hopefully, I’ll get  back in the swing of things and start posting some real stuff now.

Thanks for hanging around during this transition. Hope you are all gearing up for a nice 4th. We luxuriate in taking a day off from the stuff that needs doing I tell ya. But as I said, that is pretty much done. We can now look at expanses of time to do what we want. Decadent of us isn’t it?

14 thoughts on “And Now for Something Completely Different”