I’ve moved too many times in my life. Thirteen to be exact. This will be number 14. So I guess you can say I’ve never spent too awfully long in one place, although my entire childhood was spent in the same house.

I cannot begin to understand people who have lived 30-40 years in the same house. They seem remorseful about leaving. I’m not the least remorseful. I’m just hating the process. I hate packing. I hate unpacking. Mostly I hate the fact that I’m packing up crap i haven’t seen since I unpacked it nearly twelve years ago.

But there are memories, and shadows of dreams, plans, lives lived or not, in all this stuff.

And they play against the surface of the mind, even as you shove them down, concentrating on what value this or that has to the future.

Luckily, we are in a great position to deal with stuff that is clumsy and outdated, but still of some value. Take the lowly deep fryer.

Take it. How much you want to give me for it?

It’s an old style fryer, that holds a gallon of oil. I used to use it, but found it wasted way too much oil and was too big. So it sits on the shelf. Take it to New Mexico?

No. But I don’t want to just leave it either. The Contrarian’s best friend, a guy named Steve is an original jack-of-all-tradesman. He used to cut and split wood for a living until his back gave out. Now he grows hostas and veggies for the market. But best of all he buys and sells stuff. He knows who is looking for a tractor, and who has some snow tires for sale.

He’s our ace in the hole. He’s taking control of everything we don’t want to take, but still has value, and he will sell it on commission. Pretty neat huh? He’ll putter around our leavings and gather whatever he can salvage. And send us the money as accumulated.

Today, they are getting the rototiller, some fencing, a leaf eater, the this and thats of country life. He’ll gather his son and some young studs to haul our boxes to the Pod at the end of the lane (when I get that delivered). They’ll hump and pack it in. He’ll take our Bronco as our last hurrah, as we head off in RV and truck down the highway, leaving behind all that we can’t take or don’t want.

We will leave Brandy behind to watch over all our past life. That will be the hardest. The hardest, leaving our girl alone in the meadow. A few weeks, and I confess I spend a bit more time looking out, reminding myself that I shall soon see it no more.

Snapshots of trees, and grasses, and roses, of daffodils and wild cherry. Of turkeys in clutches on the hill, of eagles soaring, and hawks hunting. Of deer tracks relentlessly following the same path day after day. To mountains and high desert and white sands and chiles.

I don’t have much to say about the AHCA and the Supreme Court. I’m no genius, nor an expert. I predicted a 7-2 upholding. I’m probably really wrong. It does no good to speculate. Nothing can be done to affect the outcome now. It will be what it will be.

Everybody speculates as to what decision will help/hurt the President’s re-election chances. It will be what it will be.

All I know is, that for such gosh awful important piece of legislation, the Administration did virtually NOTHING to explain it nor defend it. So now? It will be what it will be.

I now know what Jesus meant when he said, “forgive them Father, for they know not what they do.” He was talking about the GOP.

If you thought that Republican voters had a clue, well, they don’t. This little factoid made me chuckle. Before dropping out the of race, Ricky Perry had garnered 14,321 votes. Since he’s dropped out he’s garnered 39,439 more. Someone clue in the dummies will ya?

Another hahaha, joke from The Willard. Let’s take a peek at what passes for humor among the so-wealthy-I-don’t-tie-my-own-shoes folks.

Romney in a phone town hall with Wisconsinites told them about how his daddy had closed down a plant in Michigan and transferred the operation to Wisconsin. During a gubernatorial campaign years later, daddy figured it was a good idea to ask the marching band accompanying his campaign stop, to desist from playing “On Wisconsin” before the Michigan hometown folks.

HAHAHA. Yes, isn’t it funny! I mean all those people put out of work! Let’s not remind them of who did it! They’re too stupid to remember without the music. HAHAHAHA.

Oh Willard, you are such an ass. And before you ask, it was Willard who called the incident humorous before he related it.

This just in. Rare old photo discovered of Fred Astaire and Ginger Rodgers. Oh how lovely they were! 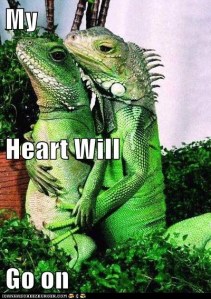