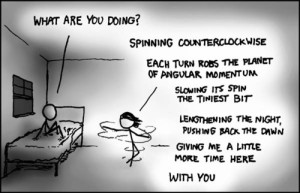 I just realized it. Really I did.

It has to do with numerous things. March Madness has begun.

You must have noticed. MSU is #1 in the Western division.

We have run off the brackets.

. . . I’ve begun packing again. The weather is so great that we are getting an early spring, so there is no point in waiting any longer. We can get a POD delivered most any time I suspect. The lane is drying out pretty well.

The list of things to do is enormous, hence my scatteredness.

I figure I have made the last major shopping trip to town. No more fancy eatin’ for us. We must eat down as much of the freezer as possible. Haphazardly put together concoctions of frozen “stuff”.

I’ll have to stop posting recipes I guess. I hiatus until we get moved and find a house to buy, and move in and get settled. It sounds like it will take months. It probably will.

I’ll have to stop this blog for some time as well. I don’t like to think of that. Who knows what we will find at the state park we will inhabit while we house hunt? Who knows.

It makes my head hurt to think about it. Better to just dumbly plug along.

But I’m feeling light and free at the moment. I packed three boxes of dishes. I made pico de Gallo and refried beans and spicy meat. We’re having tostados for dinner.

I’m sickened by the killing in Afghanistan. I’m forced to conclude that we need to leave NOW. It’s a mess, no hope of correcting it. Just a mess.

I saw something so cool on the news Saturday I believe it was. PBS is having its festival and we are forced to the Mainstream. Anyway, this guy, in memory of his mother, who loved books, created a large mailbox sized box, placed it on a pole, stuck it at the sidewalk, and filled it with some books. All with a sign that said: Take a book, give a book. The idea is spreading. People are creating their own “mini-libraries” made from all sorts of cute stuff, and sticking them where people can get to them.

The Contrarian says he will make one and we can put it up at the end of our driveway in New Mexico. I told him he could make them and sell them as well. He’s looking for some kind of woodworking hobby to take up when we move. It’s a good idea, this mini-library thing. Think about it.

As you may have heard, Gary Trudeau is doing a series on Doonesbury this week on the Texas sonogram law. Some papers are refusing to carry it. Juanita Jean is going to post the cartoon each day. Make sure you don’t miss it.

3quarksdaily has an original post by Evert Cilliers. The title says it all: The Homophobe, the Moon Colonist and the Vulture Capitalist: Why the GOP has Become a Cult Instead of a Political Party.  This is a great read, fun, informative, snarky and succinct. Read it or I’m be unhappy, and you don’t want me unhappy. Better yet, print it out, hang it on the wall, read it every day, and then go to battle.

Speaking of 3quarksdaily, another one you might look at. It’s your culture moment. What are the worst 5 presidents? Okay, Now, ask that question from a Native American perspective. Have a clue? Betcha don’t. So go read what a professor of American Indian studies thinks. Nice history lesson. Just because you are old and long past college doesn’t mean you don’t need schooling. Get at it.

When you are worried about your sanity, well you need a standard by which to judge your sanity. I give you the word salad of our beloved goof, Sarah Palin, spewing nonsense as only she can.

What we can glean from this is an understanding of why we are on the road that we are on. Again, it’s based on what went into his thinking, being surrounded by radicals. You could hearken back to the days before the Civil War, when too many Americans believed that not all men were created equal. It was the Civil War that began the codification of the truth that here in America, yes, we are equal and we all have equal opportunities, not based on the color of our skin. You have equal opportunity to work hard and to succeed and to embrace the opportunities, the God-given opportunities, to develop resources and work extremely hard and as I say, to succeed. Now, it has taken all these years for many Americans to understand that the gravity, that mistake that took place before the Civil War and why the Civil War had to really start changing America. What Barack Obama seems to want to do is go back before those days when we were in different classes based on income, based on color of skin. Why are we allowing our country to move backwards instead of moving forward with the understanding that as our charters of liberty spell out for us, we are all created equally?”

This refers to her belief (based on nothing) that Professor Derrick Bell was some radical. He was not, but it would be way over her head to understand what he was. (I would imagine Sarah’s little forays into English verbiage provides wonderful examples of “bad prose” used by English teachers across America. And for that she provides a service, of sorts.)

Until the rubber meets the road, the sun touches upon the horizon, and the lizard returns to under his rock, I remain your devoted blogger.