I am Sir Mitt, thy Liege Lord, thou are my loyal minions of the realm!

I have entered into thy hovels and dirtied my boots on thy floors, and allowed thou to speak unto me, thy superior in all things!

You are sworn to ME!

What is this display of impudence? Who dost thy think thou art?

I can squash you like I do my court jester, Timothy of Pawlenty, whenever it pleaseth me.

You shalt, by thou stupidith behaviors, suffer for thy insolence. Thou shall be assessed even more in taxes upon thy rental lands, though shalt give unto me thy first-born for my armies, though shall grovel in the dirt before my castle begging for a crust of bread.

I, your Liege Lord, have spoken.

And Timothy of Pawlenty wept, knowing that he too could have shared in the surgeth forth to slay the black knight.

And throughout the land, the Grinch that Stole Christmas, the Wicked Witch of the North, the Joker, and others of their nasty ilk, stood in line to sign up for their turn on the merry-or-not-so-go-wheel of the GOP.

And you thought the fun was over did ya? HA!

Ricky is having an orgasm in his brain that will not stop. The man is on his knees thanking God, (of course God made it all happen).

And we turn from issues economic to focus on Ricky’s favorite topic, who is sleeping with who, and the “purpose of sex.”

The President, I swear was born under a very lucky star.

And everyone knows you cannot know TOO much about Tycho Brahe, known as astronomy’s “strangest astronomer.”

There is a publication out there you may not have heard of. I sure hadn’t and you might want to take a look: The Boston Review, has good conversations about real issues. This month they focus on the “Future of Black Politics“. Take a look. Think about a subscription. My thanks to We are Respectable Negroes for the H/T.

You already know all about the Ninth Circuit’s ruling on Prop 8, no doubt. What is even better is that the polling on marriage equality is moving faster and faster to the positive side. This is inevitable and long awaited. We are so pleased, as no doubt you are too.

As you might assume, the so-called “candidates” are all mewling that “activist” judges have done away with the “will of the people”. Given this logic, it’s hard to make a case why we have courts at all. Apparently we are to put everything up to a vote. Come to think of it, that is a pretty good argument for doing away with the Constitution itself. After all, they were just “activist” colonists. Who knows what the will of the people might have been.

Unintended consequences? A “growing number” of shareholders are asking their companies to disclose just how much money they are spending on political contributions. Now of course we know that shareholders in small numbers don’t get much chance to influence anything, but one has to stop and think. If 99% are NOT corporate board members and CEO’s and so forth, in large groups, their demands might become quite important. Just sayin’ it could be interesting.

Ellen DeGeneres has been hired as a spokesperson for JC Penny. That of course is unacceptable to the wacked-out right. The “Moms” group is from the American Family Association, well-known for its anti-gay venom. Ellen responded thusly:

I usually don’t talk about stuff like this on my show. But I really want to thank everyone who is supporting me. And if you don’t know me very well, if you’re just watching maybe for the the first time or you’re just getting to know me I want to be clear. And here are the values that I stand for. I stand for honesty, equality, kindness, compassion, treating people the way you want to be treated and helping those in need. To me those are traditional values, that’s what I stand for.

I have no doubt that there are way more of us than there are of the haters.

Ya gotta laugh at the claim that the MSM is “leftist”. They have blown this whole contraception thing all to crap, arguing that the President is in serious trouble here, and will be forced to compromise, or face losing his re-election.

This is utterly stupid and untrue. Ezra Klein points out the obvious truths: most Catholics use birth control and they want it to be part of their insurance coverage. The only folks who are seriously opposed are white evangelicals. Read the chart and get real. 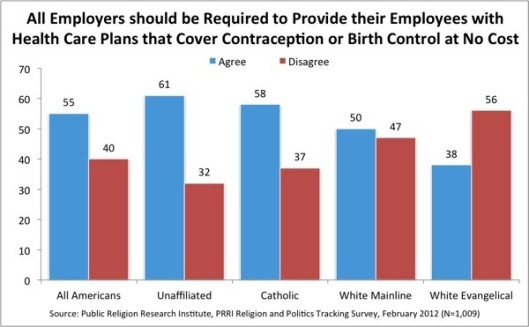 Have a good day everyone!