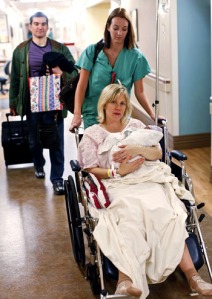 In a bold, and what a few would call a draconian move, the Alabama legislature has moved to create a new law in the state. While the upper house has yet to weigh in, it too, with it’s Republican majority, is expected to pass the bill as well. Governor Robert Bentley, who has publically endorsed the law, has indicated that he will sign it into effect immediately.

The law requires that every state hospital which serves as a birthing hospital, must obtain the written promise of parents to accept and use the package which has come to be known as “Growing up to be an American.” The law includes a proviso that those parents who refuse to sign will not be given their newborns, but the state social welfare authorities will be called in to assess the situation, and an investigation will ensue along the normal lines of claims of child endangerment.

The GA pack, as it has come to be known, includes a KJV bible, a copy the Federal Constitution and that of the state of Alabama, a copy of David Barton’s latest book, “Judeo-Christianity: Our Model of Americanism”, a copy of Lee Greenwood’s, I’m Proud to be an American, a biography of Ronald Reagan, a copy of Ayn Rand’s Atlas Shrugged,  and complimentary free literature from “Kids for the GOP”. (audio tapes available for parents who cannot read).

Parents upon receipt of the packet, pledge that they will use this material to read to their baby at bedtime for the first eight years of life. An appropriate “test” is being formulated, whereby the kindergarten schools throughout the state can determine whether each child has received the appropriate teachings that will enable it to grow into a “good citizen.”

Democrats, predictably are up in arms over the proposed law, insisting that it is overtly favoring of the Republican point of view. Republicans respond with “tough tiddleywinks, we have the majority”.

Governor Bentley is non-plussed when questioned about the Constitutionality of the proposed law. Surely everyone agrees that our country was founded on Judeo-Christian principles, and surely the state has a right and duty to inculcate such knowledge into the minds of our miniature citizens-to-be. Asked if such a law didn’t violate 1st Amendment’s instruction not the support or promote any religion, Bentley argued that no such thing is intended here, since parents are free to supplement the packet with their own personal beliefs–as long as they promote “true Americanism” he smiled.

A sudden run on U-Hauls has been reported in the state.

So none of that actually happened.

The distrust continues even among legislators:

This last is as much of a joke as the Alabama scenario I painted. The “brainchild” (some would say fart) of three “we really have no life” Republicans, last summer, does not address the rather arcane language used in Magna Carta, which dealt, as you undoubtedly remember with a FEUDAL SYSTEM and a MONARCHY.

We wonder how and when such rules as:

“We shall straightway return the son of Llewelin and all the Welsh hostages,”

shall come into play. But we are ready with popcorn and soft drinks to watch them try.

Who said Iowa had a corner on crazy?

When Ricky Santorum responds to a “why aren’t gays entitled to the same rights as straights” with a “does that include marriages of three guys, or three gals?” the response is:

“Mr. Santorum, we are hear to discuss the actual realities of today, not the weird sexual groupings that your mind apparently dreams up.”

Good news on the economy and on the jobs front just in. With months of good reports, and jobs totally over a million in the last year, Republicans are have flipped the dime from: “The sad state of our economy is all the fault of Obama and his awful economic policies”—to: “The economy appears to be rebounding IN SPITE OF Obama an his awful economic policies.” Gotta love how fast they can do that.

Don’t miss the debates on Saturday night at 8 pm Central, on ABC, or Sunday morning at 9 Central on NBC. Will the Newt (Cassius) come with dagger in hand to do poor Caesar in? Will Santorum (Marc Antony) come to praise dead Caesar or only to bury him? Will Brutus (Huntsman) get cold feet? Will Shakespeare come to the rescue? Will Santorum be ordered to “get thee to a nunnery?”  Is it all “Much Ado About Nothing?” Will Shylock demand a pound of flesh? Stay tuned.

11 thoughts on “Miles to Go and Promises to Keep”