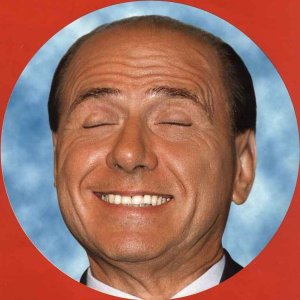 He gives me hope.

Hope that we are not (as the “new world”) the repository of all that is stupid in the world.

The glee with which the Italian people reacted to his resignation indicates that he was truly thought the buffoon among his own. And Italians put up with a lot. I mean the Pope argues for celibacy and sexual restraint in a country that’s economy is based on the buying power of mistresses.

Okay, I probably over step there.

And then there is Asia. Asian parliaments are known to erupt in actual fist-fights among the elected. I mean that suggests a certain degree of crazy doesn’t it?

So we are not alone. I take heart.

I felt compelled to watch the last debate. After missing the “oops” Perry one, I just could not risk another missed opportunity. And it was a bore, mostly. Perry pulled out his “all foreign aid starts at zero” and when others on the panel of jackasses agreed with him, looked all the part of a puppy who had finally got the housebreaking thing.

Herm and Michele, those extremely religious ones, were all for waterboarding. How Christian of you both!

Some hated Pakistan, and some saw the danger in cutting them loose.

Mitt swore that Iran would have nuclear weapons if Obama continues as the commander, but they will not if he takes over.

Michele said that the CIA is run by the ACLU.

They were mostly boring.

Jon Huntsman was the only adult.

Juan Cole over at Informed Comment has a good analysis.

We understand from sources (i.e., the Contrarian) that certain of Turd Blossoms ads put forth by his Super Slush Fund, the American Crossroads, have been turned down by a few stations in three states. Turns out they watched them, looked up the facts, and found them so hellaciously lying that they refused to air them.  I  believe that two of them, one that attacks Tim Kaine and one that attacks Sen. Jon Tester of Montana, are among those refused.

*Note: the link doesn’t speak to the refusals, just the ads themselves.

Remember that Saturday when the OWS urged folks to withdraw their money from banks and put it in credit unions? I’d say it was a pretty big success. I saw numbers of 4 billion being transferred out of the hands of banks on just that day.

Those who think the OWS movement is fringe are making a big mistake. What part of 99% don’t they get?

According to Marcos Moulitsas, editor of Daily Kos, over 700,000 accounts have been closed in the last six weeks. Some very bizarre responses by the banks are illustrated in Moulitsas piece in AlterNet. Did you know you can’t be a protestor and withdraw your money at the same time?

I know I probably just dreamed it, but I think I actually heard it.

I pray to every God in the Roman and Greek array, every one in Hinduism, any one at all, anywhere,  for it to be true.

It would make my day.

It would may be wiggle and jiggle with more delight than I experienced with my first kiss, lay, banana split, car, pair of high heels, lipstick, degree, house, lobster tail, puppy, paycheck, or just anything I can think of.

Don’t breathe a word of it. It is so tenuous a thought that the very thinking of it, might cause it to disappear like a mist off the meadow.

Sarah, is rethinking her decision not to run.

I used to think of the GOP as having a tiger by the tail, as in TeaNutz®. Such an analogy speaks for itself.

Now, I kinda think that they have many tigers by the tail, and instead of being turned on, they are just being pulled apart.

Latest, is the attempt by some Republicans to disavow the powerful Grover Norquist and his pledge to not raise taxes.

Grover, who publicly disdains any claim that he is powerful, is quite different behind the scenes of course.

You know, I keep hearing, as the campaign for chief farce in the GOP continues, that more and more of the candidates claim that God called them to this.

Which is fine, I suppose.

George the Doofus claimed as much.

But I don’t recall any of the others in that race making the same claim.

But now God has called Michele, and Herm, and Ricky (probably both of them). God could not make up his mind?

Just scratching my head is all.

What part of covert don’t you understand?

Most of the Keystone Kops who masquerade as candidates in the debates, were quick to attack Obama, claiming that they would start all kinds of “covert” operations throughout Iran to encourage the dissidents as well as hurt their economy and nuclear program.

Of course the stupid answer is simple. If the Administration is engaged in such operations, (and plenty of folks believe they are), they are COVERT, thus not up for public discussion.

Read the AP fact check of the candidates here, including the above remark. It all suggests that either the candidates are fairly stupid or simply disingenuous in their remarks. Excluding Huntsman.