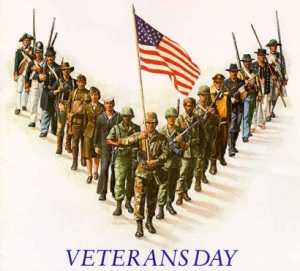 It is not who we are but what we have become.

I shall remain firmly convinced of that, for to conclude that we are violent by nature, by DNA, by proclivity, is to have no hope. We are doomed.

Looking upon the picture featured today, gives us a historical perspective of war in this country. But truly, we can, without any trouble at all, look deep into the past, and see a pattern of war that has existed nearly as far back as we have recorded our collective lives.

Thucydides wrote of the Peloponnesian Wars, and Caesar wrote of the Wars with Gaul. Numberous others have written of our World Wars, our Wars of Roses, and our Revolutions. We have our “remember the Maine” and “remember the Alamo”. We have iconic photos of raising flags over distant lands, and of naked children running down roads burned by napalm.

We have not of course. We have not breathed it in, have not suffered the stench of rot, have not see the maggots and last vestiges of  life turned ghost. We have not had to pick up and bury. We have not felt the raw sharp pain of utter terror. We have no gathered our friend, no longer recognizable, to our breast and cried in some surreal moment when our minds disconnect and we cannot make our brains function.

But they have. Those that serve us by keeping all this horror at bay for us. They allow us to worry about what to fix for dinner, and whether these pair of shoes is a good match for the new skirt, or whether we should invest in a new coffeepot. They dig in the dirt, and erase the signs of death and inhumanity while we flip through channels and choose the movie fare for the evening.

They are in uniform sometimes, and sometimes not. They act out of patriotism, or out of raw need to help create a better life for themselves or their families. They suspend their lives, offering up months and years to be used as fodder in the great war machines, declared or otherwise. They point weapons at other humans and  in their minds create the scenario that makes it correct for them, at that moment to pull a trigger, ending the life of another human.

We see some of this carnage as honorable, and some as not. It depends in large part on which side of the street you are standing. For each side, in our side-less slaughter sees itself as some moral keeper of the right. Whether led by ideology or theology, we all, warrior and spectator, develop explanations for why this must be.

And of course, there is no explanation worthy of human beings. We are taking the easy way out, which makes it all the more a crime that we continue. We kill out of fear, naked and ugly. We accuse others of greed, whether it be monetary or simple power. But in the end, it comes down to fear, as most of our negative anxieties do. We kill because it is simply the fastest way to end the fear that plagues us. It is a temporary solution, but at least it is one. And by the time that all of it has fallen apart again, it will be the next generation who will bear the new burden.

It has gone on so long, so very long that we know no other way. Would that some alien race would step in and take away our weapons of war and force us to face the truth. We will perish together or survive together. Together is the operative word here.

We are a species that is communal in nature. That is our nature. We are not lone carnivores, coming together only for quick and frantic mating rituals to perpetuate our race. We cannot survive alone, physically or emotionally. We are in this together.

We have a planet, that does not have arbitrary lines of demarcation. There are no borders other than the human constructs we create to separate ourselves from ourselves. Resources are strewn across the landscape of the planet in an arbitrary yet functional basis dependent upon climate and pure luck. Nobody “owns” it simply by standing upon it. Attempts to do so, lead to fear on someone else’s part, and then to violence to protect or secure one’s well-being.

This has all been said before.

I do honor those who have given “the last full measure” yet, I cannot help but cry out in dismay that we never seem to get on with it. We are like a needle caught in a scratch on an old vinyl record–unable to free ourselves from ourselves as the needle cannot jump forward and continue the melody.

Remember all who suffer from violence this day, but especially those who offer themselves to protect you, to give you a better life. The mechanism is shit, but the motive is pure. Honor the motive.

**Please remember that our veterans have higher unemployment, are a larger percentage of our homeless, suffer more from alcoholism and drug abuse, and have more psychiatric problems that are warranted by their actual numbers. We need to help our men and women who have been damaged by war–that is all of them.

4 thoughts on “Honoring All Who Serve”