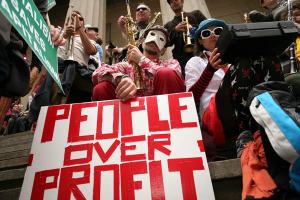 And lest anyone forget, a not insignificant number of the crazies on the right, came to said protests armed with weapons, or suggested that they were fully prepared to come “next time” with rifles to get their way.

How soon they forget.

Now that the left and frankly a whole lot of the middle are beginning to protect the unconscionable profits of Wall Street and the disparity between the 1% and the 99%, well the Right is singing quite a different tune.

Doing their best at first to ignore the whole thing, as the movement has gone on, and the numbers have increased, the Right focuses on the “violence”. Of course there is precious little of any of that, rather there are arrests based on “trespass” violations.

While first laughing at the small numbers, now that the numbers are growing, an increasingly fearful number of right-wing pundits now describe the protestors as “dangerous”. Ann (I’m still somewhat significant to five people) Coulter claims we are seeing the beginnings of a violent revolution. Allen West describes them as “dirty hippies who hate capitalism and freedom.”

In fact revolution seems to be the word of the day. (And it used to have such a good connotation in this country.) Mitt (Oh thank you Chris Christie) Romney calls it “dangerous class warfare.”

I am heartened by the fact that some of the rational folks who study these things, think it may be a thing that will keep growing until it does command the full attention of Washington. As Ezra Klein pointed out, these protestors aren’t college kids, they are college graduates with multiple degrees who can’t get work. They are home owners who worked hard only to have the economy and corporate greed deprive them of first a job and then a home. These folks aren’t going away, because their troubles aren’t going away.

And it has also been pointed out, that the really major movements in this country have been slow-growing, for people wait, hoping that things will get better for a couple of years before they resort to forcing change upon reluctant politicians who are comfy in their graft-happy world.

In case you didn’t hear, Earl Ray Tomblin, (D-WV) won the governorship over his TeaNutz® candidate and attempts by the GOP to paint this as a referendum on President Obama. The GOP nearly doubled the money spent by the Democrats.

Either it wasn’t a referendum on the President, or it was and we see how much importance the TeaNutz® influence politics on the state-wide scale.

Best line of the day:

That is from Juanita Jean’s. You go girl.

One thing that is really making me angry. (out of thousands these days) is the utter contemptible manner in which the far right wing-wackers speak of the First Lady.

I mean it gets down to physical descriptions of her anatomy as befits the usual 8-year-old. It is demeaning, simply awful and disgusting. It always comes from white men.

It does not matter what this woman does, be it care about the health of children, or try to maintain some sense of normality in the lives of her children, they vilify and mock her at every turn. (yes we know it’s all about THEIR lack of self-esteem).

And this is just not the common trailer-trash that hangs out at The Blaze. Rush (where are my drugs?) Limpuh, regularly refers to her as “MOOshel”, or “Michelle my BUTT.”

Speaking of draconian laws. The Alabama laws that were passed and so far upheld targeting “illegals” continues to have unintended consequences. Remember when a bunch of fruit farmers left tons of fruit in their fields because Hispanics failed to show up to work out of fear, and “white people won’t do the jobs?”

Well, there’s more. It turns out that fully 7% of all Hispanics children have failed this year to show up for school, fearing arrest. And that turns into big bucks that the school districts lose in federal funds. Something like 130 million could potentially be lost to the districts.

Ya gotta love a guy who doesn’t worry about facts. Facts as I often say just get in the way of a good opinion.  And Herman Cain seems to think that’s the best way to speak publicly. Speak from the gut, and well, it works for the base.

In the last couple of days, probably freakin’ freaked out by his unbelievable surge in the polls, Herm has taken to spouting crap that will not help him in the long run.

I guess that kind of stuff plays well somewhere, but me thinks its to a very tiny little place this side of Insanesville.

11 thoughts on “When It’s the Left, It’s a “Dangerous Revolution””