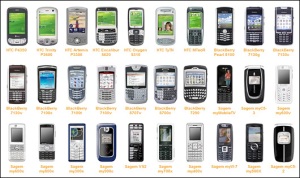 Whee! The Contrarian and I are heading to a century near you!.

He, the Contrarian that is, has given his permission to turn on the volume on the TellyVision and we are gonna have “talkies” at last.

More than that, we are in the market for one of them magic phones that you tie onto your belt and that you can talk with without a cord. I’m nearly jumping for joy and am getting ready to throw away the cans and string that we have used low these twelve years.

And the little guinea pigs are sure looking forward to getting off that wheel that powers the computer!

So now we need a little help from our friends. You guys need to get your thinkin’ caps on and advise us on what kinda thing we should be lookin’ for.

We probably won’t be needin’ to text much, unless I can magically do Intertube thingies on it. We would love one of them iPhones with all the little things they call “apps” absolutely, but we probably can’t afford them babies.

The Contrarian is concerned about “plans” that might lock us into contracts that will leave us in New Mexico next year with a plan that doesn’t “work” there.  Something about “can you hear me now?” He thinks that exactly where we are going is where Verizon has a big fat white “we don’t cover that” area .

So, given we are dumber than a slug at a beer festival when it comes to this cell phone business, please lead us in the direction we should move. Thanks in advance.

And I am sure excited to move to New Mexico, where I hear they have indoor plumbing!

My great white hope for the GOP seems to be imploding all over himself. I mean I could slap this little jackass. I want my President to be re-elected and I really really thought Ricky would be the best opponent to lose to Obama.

Assured that Perry was the dumb version of Bush, I hoped he could hold it together long enough to get the nomination. Alas, it seems not in the cards.

Now it seems that Perry’s “family” retreat was named “N*****head”. Although the rock was painted over, it has never been removed, and the words are clearly identified through the paint over.

Perry of course claims its been painted over since the 80’s (a bit late doncha think?), but Hermain Cain calls the retreat name “insensitive.” Duh. Yeah I guess it is Herman. I guess you gotta tread softly here since your peeps don’t stand for any person of color “playing the race card” and that would be what you are doing here.

Wonder how this is all gonna play out. DMartin has her superlative take on this one here.

We here in the Holler’ still swear by the Farmer’s Almanac, which has been going strong since 1792. By their own horn tootings, they are 80% right on all things meteorological every year. That’s better than the average idiot on your local news.

We are told that there is a hole punched in the “book” every year. That was started so the darn thing could be hung in the outhouse (it’s where we keep ours), and it doubled as toilet paper when the corn cobs ran out.

There are tons more interesting things about the Almanac, but really go read the article if you want to learn ’em. I’m not giving stuff away free here.

Well, we always said, American’s are plainly stupid by and large. Only 51% of Republicans knows what GOP stands for, which is slightly better than the 45% of all Americans. Now some of them think it means:

Need to tickle the old funny bone? You can’t do better than DistributorCap’s post today. His mind is brilliant when it comes to this stuff. So go read How to Succeed in Politics Without Really Trying. 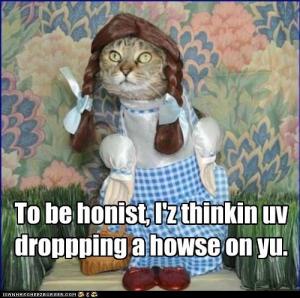 I don’t know about you, but I call this animal abuse. Do NOT dress animals up in clothes!