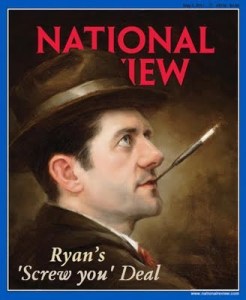 If some of you were still wondering why so many of the more rational members of the GOP have opted out of the 2012 race, yesterday’s vote in New York should answer your question.

Touted by most as a referendum on the Ryan fiscal plan for America, the election in New York’s conservative 26th district says it all. The GOP, in case you missed it, was roundly defeated in both its “normal” and teabuggery wings.

One thought only the Democratic party could take a sure thing and destroy it, but the GOP has taken what looked to be a winning mandate and done just that.

It appears that the wilder and crazier wings actually thought that America would buy their “true” colors. Of course, any moron with half a normal IQ would have told them that the hidden ideology of the party would never fly with the average person who was neither ultra rich nor a giant of industry. The outright admission by the GOP that we are out to screw the little guy and give wheelbarrows of more money to the rich is not a message that will fly with Joe the mechanic.

If the GOPer’s continue in the following veins, this next election is going to be a yawner and Obama can be in bed by 9 pm.

Herman Cain, on why he won’t have Muslims in his administration:

I have been upfront, which ruffles some feathers, but remember Bryan, being politically correct is not one of my strong points; I come at it straight from the heart and straight from the way I see it. And the comment that I made the become controversial, and that my staff keeps hoping will die, is that I wouldn’t have Muslims in my administration. And it’s real simple: the Constitution does not have room for sharia law. I want people who are going to believe and enforce the Constitution of the United States of America. And so I don’t have time, as President of the United States, to try and screen people based upon their religious beliefs – I really don’t care what your religious beliefs are, but I do know that most of the people of the Muslim faith, they believe in sharia law. And to introduce that element as part of an administration when we have all of these other issues, I think I have a right to say that I won’t. [to Bryan Fischer)

Or Rick Santorum on why he doesn’t hate his detractors:

RS: He [Thomas More] drew a rather beautiful explanation, as you said, of having one foot in this world and another in the next, looking at ultimately what was going to happen to the people who were his prosecutors. He said, “Well, either they are right, and I am wrong. And if that’s the case, then why should I hate them because they were right and I was wrong. Or if I was right and they were wrong, then one of two things. That they will repent and they will be my brothers in heaven and so why should I think ill of them now just because right now they are doing things that are wrong. Or they will not repent and they will be damned to eternal damnation and what kind of man am I that would hate someone who is to be pitied as such?” And so, that’s sort of the way I look at it. [To Gail Trotter]

Or Sarah Palin questioning why the lamestream media didn’t properly vet the Negro in the White House’s upbringing and associates:

“What isn’t fair, though, is when it’s only one-sided, when it’s only the conservatives, say, who get hammered away at those things that the press wants to know. You know, the perfect example of the media one- sidedness is Obama’s record not being explored, his associations in the last campaign not being explored, and now revelations of maybe some of his upbringing, some of his background, certainly his associations, how they impact his world view and how that affects his decisions today.”—on criticism from the media, in an interview with Fox News’ Greta Van Susteren, May 19, 2011

I could go on, but you get the picture.

What’s on the stove? stir fry of sausage, onions, sweet peppers and tomatoes over a bed of roasted potatoes.