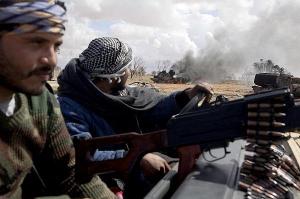 I was one of those who believed that the imposition of a no-fly zone over Libya was needed. I was and am all too aware of the dangers involved.

As predicted, those of the Right are not satisfied regardless. No matter what President Obama chose to do, it would be wrong and they would shout it out to their base.

Obama said American involvement in any leadership vein, would be short, a matter of days rather than weeks.

It seems he was truthful. Rebels have been able to retake the town of Ajdabiya. Given air support and the taking out of large artillery, they can fight Qaddafi forces and prevail. What is of even more significance is that Qatar and the UAE are both flying jets in the no-fly zone.

It may come to be that once again we have underestimated Barack Obama. I can but imagine that the naysayers those who are GOP presidential hopefuls and others are chewing their hats about now. They pray for failure to enhance their power. That’s the GOP way.

You may have missed this: Maine’s ReCorpricans are at it. The Guv, has declared that murals which depict Maine’s labor history will be taken down from the State Department of Labor. Additionally, conference rooms long named for labor leaders like Caesar Chavez are being changed, to reflect “pro business” goals. [h/t to Infidel753]

If you listen to Foxy Noise, or any of the typically wingnut GOP leadership, the power and prestige of the US is at an all time low, due to the “bungling foreign policy” of one Barack H. Obama. Oddly enough, that doesn’t seem to be the way the WORLD thinks of us. A Gallup poll suggests that we have rebounded quite nicely from the abysmal low Chimpy left us in to a respectable level once again. Read it and weep teabuggers. [h/t to Infidel753]

Guv Walker in Wisconsin has decided to defy a restraining order issued by a Madison judge, and has published the union killing bill anyway, giving rise to the question of whether it goes lawfully into effect or not. Under the Lobsterscope has the story with plenty of links.

Official Vatican teaching is one thing. American Catholics are quite another. Recent polling by PPPI shows what has been consistent in other polls (Pew for instance) for some time. Namely that Catholics in the US support LGBTQ rights including marriage at a higher rate than any Christian group.

The Progressive Catholic Voice reports that Catholics retain an “underlying social justice” position that prevails over the official teaching of the Church. I of course, applaud this fact. Basically most Catholics I think agree that Magisterial teaching is basic to formation of conscious, but as the writer states here, is not absolutely controlling. Primacy of conscience, long upheld by the Church itself, causes Catholics to weigh the circumstances alongside of doctrine and decide moral issues in light of many factors.

What’s on the stove? scallops with linguine in a lemon butter sauce, with foccacia and salad.

15 thoughts on “Thinking is Against the Law”