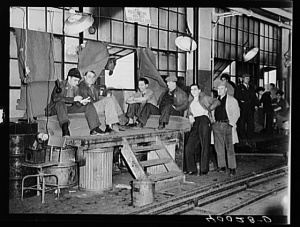 In the dead of night, nefarious Rethugs did the deed, manipulating a rule to effect their goal, the end of unions in Wisconsin.

Claiming that a quorum was not necessary for a non-budgetary item, Rethug leaders stripped the cancellation of collective bargaining from the general budget bill, and then voted on it as a single item.

There can be no further claim by Walker and his henchfolk that this was a necessary measure to stave off economic crisis. This is simple union busting, and they now admit that through their clandestine actions.

We now know what tyranny by a minority is all about. Lying to the public in order to obtain election power, and then turning on the real agenda, this is what we are witnessing in Wisconsin today.

The lesson is clear. When your message appeals only to a strident and fanatic minority, then develop ways of destroying the other party, so that you remain the only party left. This is what Rethugs and their cohort of multinational corporate masters are trying to do in America. It is nothing less than the total destruction of the Democratic Party. Once accomplished, they will grind all but the top 1% under their heels. Slavery will return to America.

Are you awake yet America?

We here at AfeatherAdrift stand in solidarity with the workers of Wisconsin and those throughout the US who protect the rights of all workers by their courage to be UNION.

If that doesn’t do us in, then racial and religious wars are likely to. In their fanaticism, the ultra crazy right-wing pursues policies of racial and ethnic division within the US, all policies that encourage the solidarity of those groups they despise, around the world.

Peter King opened his hate mongering hearings today in the face of even opposition within his own party, albeit, from those still rational enough to think. King’s witch hunt will be used around the world to rally anti-American sentiments by radical Muslims. But King prefers to live in his own dream world where he can define what is dangerous and what is not.

It should be noted that King himself supported the IRA rather openly in years past, times when they were defined by this country as a terrorist group. King of course, is wise enough, by his own estimation to not be bound by the rules he now attempts to impose upon others.

King, the new McCarthy of our time, will continue to hurl innuendo and invective upon a Muslim community that has done nothing whatever to bring this upon themselves, other than in King’s fuzzy thinking, not prove to his satisfaction that they are doing enough to stop radical Muslims in the US.

We stand, here at AFeatherAdrift, in solidarity with our Muslim brothers and sisters as they weather this unfair and vicious attack by the bigot Peter King and those who follow him.

UPDATE: We now understand that the Wisconsin union-killer “bill” also gives the power to fire anyone who is suspected of being absent from work with the purpose to support a “strike”. In other words, if workers across Wisconsin walk out in protest against the Legislature’s probable illegal act, they will be fired. Did I say something about tyranny? Walker is a demagogue.

NPR got caught in the latest “video sting” done by right-wing wacko James O’Keefe. What did they catch? A NRP having lunch with some “fake” Muslims, and remarking that the GOP Teabuggers were racists, fundamentalists, and “scary.” All true you say? So say I, but apparently it frightened higher-ups in NPR and caused the typical resignations. I’m not sure what is wrong with speaking the truth. It’s not as if those “offended” by the remarks listen in anyway. They despise the NPR as the “libtard lamestream media.” Who cares? I’m puzzled by NPR’s lay down on this one.

What twists my knickers on this is, that O’Keefe’s lying tactics are of course applauded by the righteous-wingnuts all the why they are just as appalled at the trickster who punked Gov. Walker in Wisconsin pretending to be David Koch. O’Keefe is lauded as a warrior, while the other engenders Republican bills to make such tricking “illegal.” Ain’t having no brain grand?

We look upon events in Libya with sorrow as the forces of freedom seem to be losing to the superior fire power of the madman Qaddafi. I have no clue what is the right solution here, in terms of the international community, but the slaughter of so many is deeply sad. We continue to pray that the rebels will prevail. Qaddafi seems unconcerned about the opinions of the world.