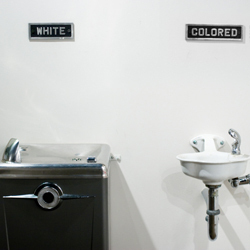 Hate has shaped America from its inception. Strong statement, but I believe essentially true.

Hate caused the new colony in Massachusetts to deny property rights to Catholics, Jews, Quakers, and anyone else who weren’t the “right” faith denomination. They were also prevented from seeking office, and many were thrown out of the state and not a few hung.This was repeated in most of the other new colonies as well.

Indifference which turned to hate,  led America to push out and then virtually exterminate indigenous people in the growing country.

That same sentiment led to the 3/5 clause in the US Constitution and ultimately to a thriving slave-owning business throughout both the North and South. Many of our first presidents and other founding fathers owned other people.

As each wave of immigrants came into the country from, they were mistreated and segregated for a generation or more.

Now we have turned out animus upon those of Latino and Arab descent. Oh, I know, we’ve looked down upon them for decades at least, as we have Asians. Anything not-white was not quite right, not as good. But for the most part, except for the Japanese internment, we have been happy to eat their cooking, and walk on the lawns they mowed, and buy from their convenience stores without anything overt.

That changed with 9/11. At least insofar as Arabs were concerned. And as the economy began to sink, Latinos, in the guise of “illegals” became a convenient target.

It seems that everywhere we look we see utterly crazy people doing utterly crazy things. Legislatures being inundated with idiotic laws meant to limit the rights of parts of our population. Of course the answer is not that there are more crazies today than before, but that the Internet has allowed crazies to connect and validate each other, and to speak in a forum that reaches to the ends of the earth.

These once secluded loonies now bay at the moon all their hatred of “other.” And the vast majority of us who are rational beings, well, we worry.

Having spent a couple of weeks thumbing through the comments at The Blaze, I’ve learned a few things. More than a few actually. It’s important to understand the code, for it tells you much of what is actually going on.

I’m reading a book featuring Thomas Merton’s letters. Merton was a Trappist monk and kept up a huge correspondence with something in excess of 2,000 people over his life. In a letter to James Baldwin, the writer, he noted:

“. . .there is not one of us, individually,racially, socially, who is fully complete in the sense of having in himself all the excellence of all humanity. . . .I am therefore not completely human until I have found myself in my African and Asian and Indonesian brother because he has the part of humanity which I lack.”

Truer words were never more eloquently spoken. And yet, there are people who are aghast at such sentiments.

Over at The Blaze, one of the things I’ve learned is that white people, themselves specifically, are NOT racist. They adore and revere Martin Luther King, Jr. However, you might not be familiar with Dr. King, for he was for Equality of Opportunity. He was NOT for social justice. He was NOT for redistribution of wealth. He was NOT for actions that attempted to undo past wrongs, and level the playing field. No, Dr. King would be appalled at such things. He wanted only an equal chance.

I learned that Jesse Jackson, Rev. Al Sharpton, and ANY black (they never use the term African-American) person who espouses institutional racism as still evil in this country, ARE in fact the racists of the day. The NAACP is a Marxist organization, or mob controlled. They are also purveyors of racism. Always “playing the race card.”

Because Jackson, Sharpton and the NAACP are racists, they can be heaped with the ugliest epitaphs imaginable. It’s okay to call them even such things as nappy head, because they are the racists, and therefore deserve these terms. You see, when you are not a racist, and you identify the victim of racism as yourself, then why by definition you can’t say anything racist!

Indeed, the loudest cry from these demented haters is that there is no racism in America, anyone who says different is a racist. All that is behind us. Why can’t white people form into organizations like the NAACP? Why can’t they call themselves “white Americans?

Racism is done, ala Michele Bachmann, and her vapid rewrite of history wherein the Founding Fathers ended slavery.

Ain’t it just so neat?

This redefining allows these same folks to decry Latinos and Arabs to their heart’s content. Because it’s got nothing to do with them as them. It’s got to do with them–acting as Them. You know, being Illegals and flying planes into buildings. It’s a free ticket to call all the names you wish, because it ain’t racism.

Can’t you see that?

It allows the final insult. We can call the President vile names and his wife equally vile ones. Why? Just because he’s defined as a racist (ala Mr. Beck) and we ALL know he’s nothing but a dirty Muslim/socialist, communist. It’s not because we still secretly hate B L A C K.  Have you heard that word said, with the acid dripping. No mistaking it. It’s the big N, but pronounced BLECK.

We can claim we aren’t racist because we listen to Juan Williams and we support Alan Keyes and we think we have a good house Negro in that fool from Florida. We loves us some a dos Negroes. They talk like us, the Clarence Thomas’s. They don’t want a “free” ride. They don’t want welfare and free homes, and all that stuff that comes out of my taxes. They DON’T THREATEN OUR PLACE AT THE TOP OF THE MOUNTAIN!

It’s good to know the language.

**I found a picture I almost used today. But then I thought it might be taken the wrong way. I’ll describe it. I’d really like your reaction. It was about 5 little tiny black chicks on a stone wall, and a single yellow chick  just below them, with its little wings spread and saying “N * * *ERS. I thought it was a powerful statement of the reality of our time, but again, was afraid it would be seen as humorous and therefore wrong. Let me know.