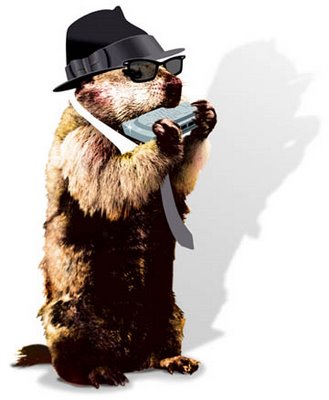 It’s tomorrow. That stupid hauling out of an innocent but essentially stupid animal. Go ahead, subject him to lights, camera, and gawking humans.

Ask him if he saw his shadow. Hell, he doesn’t know what a shadow is. And I’ve yet to see the correlation between his shadow and atmospheric conditions across the vastness of North America.

We have enough trouble dealing with the massive slap in the face we are getting this afternoon in the form of a blizzard. (Actually we might get by with no more than six little inches, so I’m feeling frisky.)

Anyway, this is the last month of winter by my reckoning, and I’m intelligent enough not to go around asking woodland critters their opinion.

So, welcome to February. It’s gotta be all uphill from here!

Picked this up from the Salon. It was just too good not to include.

Fox Crap is reporting very little about what’s happening in Egypt. They are playing it as a bunch of Islamists bent on setting up an Al Qaeda-friendly government. Not truthful of course, but as the next article makes it quite clear, this is exactly what Fox does so very deliberately.

Andrew Sullivan points out that what Fox Crap does is not just misinforming their viewers, but is deliberately done that way. No other way to explain Beckian insanity, and the deliberate attempt to encourage their followers that they cannot trust anyone else to give them truth. This is some sick stuff.

In case you missed it, Jon Stewart did a hysterical Sarah Palin gotcha. You remember her and her WTF little drivel? Well, Stewart, ala Fox Crap, or more specifically ala Beckian conspiracy theory, makes out a very convincing case that our Sarah is in reality a Russian spy. The Salon has it.

Like Daddy, like daughter? Nope. Dubya’s daughter, one of them at least (the brunette?) I think named after grandmother Babs, has come out publicly in favor of same-sex marriage. In this case, the apple falls far from the tree, or acorn, or corn cob. Whatever, you get the idea.

I haven’t posted a recipe in a long time. I saw this and it looked like it might be good. An Asian Coleslaw made with that broccoli slaw in the bags at the supermarket. Simple ingredients.

Almost forgot. February is Black History Month. Here isa very nice speech given by Sojourner Truth. And check out the site, it’s one I’ve never seen and it looks like a good one! History buffs!

See, it’s smart to not walk on frozen ponds if you are unsure. CRACK! Massachusetts Scott Brown’s dalliance with the TeaBuggers is apparently over. The NRT (National Republican Trust) PAC, who backed his election with money galore, has given word it will do its level best to unseat him in the next election. His crime? Not voting NO to every Democratic legislative bill. That was his duty according to NRT mouthpiece Scott Wheeler. Oh how quickly it all unravels. *SNICKER*

In other states, teabugger organizations are poised to get rid of Olympia Snowe, Orin Hatch, and Richard Lugar. These are all Senators, like Brown. What the dim lights fail to get is that they lost almost all of these Senatorial campaigns. Their following is too small to win anything but small congressional districts where like-minded narrow minds have gathered to live in covens of irrationality. Duh.

Snoring Dog Studio, great friend of AFeatherAdrift, has a serious confession to make. I’m not saying, but I was utterly shocked. From a purist like me, well, I’m not sure we can remain friends. Perhaps we can, but I can’t let her in the house. They neighbors would be aghast. Bring Sno Balls as an offering. I could be persuaded.

I gotta get busy with cooking.

What’s on the stove: fajitas!

14 thoughts on “Hell of a Way to Start a Month”