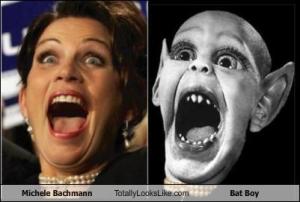 If you see this woman (boy I know it’s a stretch), run, run, run for the hills. Michele (you like me, you really like me!) Bachmann is an alien. The TV show “V” is no lie.

Suddenly a pall came over Iowa, and I knew it had reached us. The dingbat from Minna-SO-ta, arrived in Iowa and ‘splained to us heathens the real news about our hiss-tor-ee.

You see, contrary to what you might have learned in high school, or perchance in undergrad school, slavery ended with the Founding Fathers. Yes, yes, surprised aren’t you? Wondering about that 3/5 clause? Trying to figure out what that dang Civil War was all about?

Michele, my ding-dong bell, tells us that the “founding fathers worked tirelessly, until slavery was no more”.

“It didn’t matter whether they descended from known royalty or are of a higher class or a lower class. It made no difference. Once you got here, we were all the same. Isn’t that remarkable? It is absolutely remarkable.”

Yes, and did you know this:

John Quincy Adams worked tirelessly, until slavery was no more too.” Except that JQA died like 15 years before the Emancipation Proclamation. Of which there was no need in the first place, since the FF had already eradicated it.

Yes. Silly old us. Dumb us.

Ms. Bachmann, while missing some of the finer points about black history in this country, also missed a few points about the early colonies. Last time I checked, Catholics, Jews, and Quakers, among others who were not of the Puritan persuasion, were not allowed to own property, run for office, and were often run out of the colony, if not hung. But “we were all the same.”

What is even more frightening, is that tons of the extremist right have risen up on their haunches to defend her, claiming her take is correct. Yes, these history and constitutional experts are just plain tired of black folk trying to gain all the sympathy. When will they stop complaining?

I guess Washington and Jefferson, just “sorta owned slaves” for their own good. There is a claim that Washington’s false teeth were taken from his slaves, and worse yet that James Monroe had 30 of his slaves executed for attempted escape.

I rather suspect that Ms. Nuttery has gotten her history from David (historian is a pretty word, I think I’ll call myself one) Barton, the religious ed teacher who now claims to know more about the history of our foundation than do legitimate scholars.

Barton is noted for quote mining letters written by various people in the original colonies all to prove that the country was founded on Judeo-Christian principles, with a presumption that we were a Christian nation. What Barton does is take a scrap of truth and try to create an entire garment from it.

That’s where Glenn Beck got his novel and utterly disgusting “defense of the 3/5 clause.” Beck ingeniously claims that the 3/5 clause was a brilliant “first move to end slavery”

Except this is totally wrong. If the founders had wanted to end slavery, then giving them no value would have been the best they could do. The South wanted them counted 100% so they would have greater representation in Congress. Giving them 3/5 only encouraged them to import more slaves, thus to up their control, and thus ensuring that the institution would be retained.

This is revisionist history at it’s best/worst depending on which side you are on. Sadly, one has only to go to The Blaze.com to see the fruits. I have quoted here, commentors there who said exactly what is quoted here by Bachmann and Beck. These people find what they want to hear, they are never going to study any deeper, and frankly, they’ve been taught by Beck et al to distrust “real” scholars as nothing but eastern  liberal elites.

Of course it does no good to try to explain any different. Beck and company play to fear and gin up their troops to hate all the appropriate people: elites, liberals, blacks, Muslims, immigrants, and Democrats in mass.

Meanwhile Beck whistles a happy tune on his way to the bank to deposit more of his newly gained fortune.

Bachmann? It’s always hard to tell. Is she willing a willing shill or a duped dope? I’m not sure we will ever know.

Back at the ranch: The GOP is none too pleased with bobble head’s “tea party” reply to the SOTU. It was, so I’m told, BORING. Worse it conflicted with their boy Ryan’s equally boring response. You can get a fact check of her “facts” here, if you wish, but you can be assured she didn’t get many fact right. One might conclude that she knowingly falsified her claims.

If you missed it, Ryan basically hoped you had a short memory by claiming that “we are all responsible for the state of our deficit” since both sides did awful things. Forgetting I guess that under Clinton we had a surplus and after tax cuts for the rich, two wars unfunded, and a patient’s prescription bill that costs billions and was also not paid for, added to no regulation of banking, we tanked.

He then went on to basically say Obama was destroying America, and Republicans would set things right, without any specifics at all. Just a lot of veiled threats that if we don’t give the power to them, bad things will happen to your kids.

And the beat goes on.