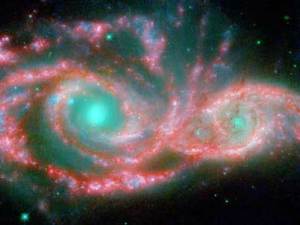 At last, perhaps I can get a good night’s sleep again! I haven’t had one since that dark (pun) day in 1998, when I learned the awful truth: the universe seemed to be expanding at a faster and faster rate! My once cozy pulsing home was threatening to shred itself and leave me forlorn in an ever darkening sky as old friends rapidly flew off into a cold inky black.

Well, no more worries. It appears not to be happening. That demon “dark matter” is a truth we must accept, but it appears that the Alcock-Paczynski test may well prove that our universe is “flat” or what we used to call steady state or static. Just enough gravity, just enough dark matter to keep it in a comfortable rocking to and fro.

I know we just finished Thanksgiving, but this is a whole-nother-level of thanksgiving. I will never not see my beloved Orion, my dippers, my Pleiades. Oh sweet God, I knew you would come through. Let’s have a party!

Speaking of Thanksgiving, hope your’s was a good one. Mine turned out most excellently. The meal was sublime, and we feasted until we could force in no more. We liked it so much, we are gonna do it all over again today! And Saturday, and Sunday. You see the method to my madness?

I confess! I really do, or did, and am going to continue. I was simply delighted when I learned that “the Hammer” got hammered and may be heading for the slammer! Tom DeLay was convicted in that old state of Texas (good for something!) for money laundering.  I don’t think they execute for that, money is God in Texas along with football you recall. But here’s lookin’ for some good old time for the man who thought he ruled the world when he was in Congress. Oh let the sentence be fair: LONG. (H/T to Crooks and Liars for the link)

I have to give it to WordPress. The new linkage system is up and running, and they have added a few new features that don’t concern readers, but are certainly nice. One of which I think is not so new, but I just found out how to do it, and it sure speeds up my game. I can now reply to comments through e-mail which is soooo much faster than publishing replies again and again and waiting for it to refresh. Hurrah!

Again from Crooks and Liars we get a link to Whiskey Fire and a post on our Sarah. It’s not what you might expect, but it’s an interesting take. I’m not sure how I feel about it. Are Dems the ones who have missed the chance to have a salacious babe mouthing their talking points? I would hate to think so. Yet the point is made, much of Sarah’s following has zero to do with policy or politics, it’s pure sexy appeal and the “it” factor.

AlterNet also has a nice piece on Sarah about her brand of “feminism” which amounts to nothing more than narcissism-namely hers. If it affects her, then it matters, if it doesn’t, than as the article says, “women suck it up and be strong”. Which explains why women don’t cotton to the Moosilla Maven so much.

Speaking of snake-oil sales persons, I’ve decided that the “know what we are doing” crowd consists of Palin, Beck, O’Reilly, Coulter and probably most of the house and senate wacko-heads. Those that are seriously stupid include Hannity, Bachmann, O’Donnell. The aforementioned know they are bilking the US for as much as they can for as long as they can. The give not a rip about anyone. Bank accounts matter. Your list?

Ahab at Republic of Gilead has a great post of a lecture he attended on Christian escatologies and environmental issues. It is really an eye-opener if you are puzzled why some sects of Christianity continue to literally ignore the damage we are doing. These don’t deny it’s happening so much as they don’t care and believe that we should not waste our time to help the planet heal. It’s an amazingly good read.

And 180° it is. I’m going back to my original position on the airport patdowns. After watching Fox and jerks like Huckabee all malign the administration for this “outrage” I can but conclude that this is nothing much more than “any way at all to make Obama look bad.” Huck has demanded that Obama submit his family for this search if it’s all that good.

I guess Mikey was just trying to protect his son who got caught carrying a GUN in his luggage at Little Rock National Airport. What his son needs a concealed weapon for, (being a son of a preacher man) is beyond me, but we see where Mike is coming from.

While I conclude that there may be legitimate reasons why these searches aren’t as useful as they might be assumed, I’ll stick with support as long as the idiots at Foxy are trying to take down a President via this means. And something like 70+% of the public is behind the TSA on this. It was higher, but the rightwing (those bastions of security) has done its thing again.

Enough for now. Time to hit those leftovers again and watch a little more football.

13 thoughts on “Thank God for the Alcock-Paczynski test!”