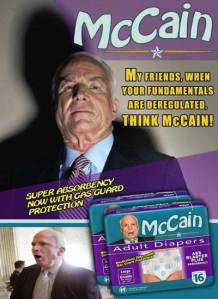 Yeah, I know, there are so many damned candidates in the GOthugery Party. But John ASSidney McCain tops them all, and by a long shot.

I was minding my own business, having had a thoughtful and I felt rather spiritual day at Church. I wrote a piece for Walking in the Shadows, and I thought I would see what was about in my reader. I didn’t intend to write any more.

But, the first thing I run into is Douchehead’s interview on Meet the Press, with David Gregory, and I went ballistic. Seriously, I was screaming.

First I owe an apology to all for my post last week in which I congratulated Cindy McCain for having some common sense and guts enough to “do the right thing.” Clearly she is scared shitless of the old windbag she is married to.

I have concluded that Cindy is probably abused verbally. That is no excuse for her however, since she has money to burn and no reason to stay with that awful excuse of a human being. That she could have done the video unaware of her husband’s position and the avalanche of anger that would come her way, only makes it more clear that they live very separate lives at this point.

Enough said of that. She backed down and reversed herself, claiming that she “supported” her husband’s position. He brushed off questions as to her “turnabout” with “I don’t stand in the way of any member of my family exercising their first amendment rights.” Liar, you damn liar you.

John Sidney, you will recall, during the run up to ’08, wanting to appeal to gays and others on the left, lied (or told the truth, it’s hard to tell with John. Everything is said and done with ulterior motives, meaning NOTHING about him is anything by dishonorable and unprincipled), and said that as to DADT, he would be guided by what the generals said. If they were in favor of ending it, so would he be.

When the generals spoke, suddenly Johnny sang a different tune. Embroiled in a re-election run that wasn’t going as easy as expected, he suddenly found it politically useful to take a harder line. Now the generals, who favored ending the practice, weren’t enough. Johnny thought they should wait until a Pentagon study was completed, a study that would conveniently not be done before his re-election was up, and would let him off the hook.

Well, he won his crappy election, and is now returned to the business of screwing up Obama’s agenda in every way possible because he is a sore loser, and always “pays back” those that have the temerity of beating him fair and square.

The Pentagon study has not been released, but plenty of it has been leaked, and it’s quite clear that the study will recommend that DADT be ended and gays be allowed to serve openly.

What is McCain’s response? Suddenly, he no longer cares about the study. It has suddenly become “flawed” and now we need another study. This unprincipled, dishonorable son of a bitch is simply not willing that Obama gain credit for ending this loathsome practice.  As usual, people don’t matter, only McCain’s desire to punish. This may be the most ugly person I’ve come across in a whole lot of years.

The only solace I get is that this execrable human detritus is eaten up with such hatred and self-pity that he fairly oozes black blood. What a shameful excuse he is. And I intend to write him a letter telling him just that.