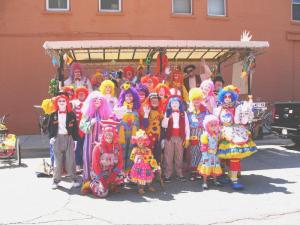 Well, it looks that way to me. What can I say? I  am so tired of lies and more lies and more lies that I can hardly bear it. As I said, we are opting out of watching the returns. Take it like a woman, on Wednesday morning, full-face assault on my sanity.

Oh, and I just had recouped it Saturday. It didn’t last long. Jon and Stephen were fun, crowd estimates were pegged at 216,000, but the right-wing, sure that their idiot boy Beck garnered between 3-600,000, cry foul. They of course claim that CBS’s estimate of 87,000 was a liberal media lie, so you know they won’t buy 216 from the same source.

Sarah, idiot savant, Palin is at it again. Using  the phrase “corrupt bastards” as regards CBS. There is a voicemail not disconnected, and some journalists laughing at how to ingest some interest in the rally. Some garbled suggestion, of going to find a  child molester in the crowd, or something like that. This is all amid laughter as it appears all were offering humorous suggestions.

Palin has turned this into some attempt by what she claims is the CBS affiliate (which it is not), to fraudulently make some bogus charge to further derail her boy’s campaign. It’s all so much silliness of course. But Sarah claims it is going to blow up all over Merika any day now. We await, Sarah, we await.

She’s burning up the tweet world with her slashing allegations. Just as she did a few days ago when she utterly misunderstood the tongue in cheek jibe at Ahmadinejad’s birthday greeting from the State Department. Sarah, you see, barely able to read coherently, and unable to talk coherently thought it was a serious well-meant greeting. She took offense–more pallin’ around with terrorists in her vacuous mind.

Tom Tancredo and Steve King vie for the title of the craziest MF to be born in America in the 20th century. Steve King, who claimed that a vote for Obama in ’08 was a vote to make Bin Ladin and Al Qaeda dance with happiness. He also voted against Katrina relief. He also voted against a Congressional resolution honoring slaves who built the building. He refuses to debate his opponent claiming he will when he finally gets one “worthy” of his time. He voted against his entire Iowan congressional caucus who voted to increase Native Peoples ability to fight rape among Native women on native lands, and called those who protested, “unaware of what bill they are even talking about.” He is speaking to crowds of less than 30 about how all three Iowa Supreme Court Justices up for re-election, should be booted because they found the marriage act unconstitutional in denying same-sex couples. He is apparently too stupid to realize that two of the three were appointed by gubernatorial candidate and past Governor Terry Brandstad, and that 60% of all judges in Iowa were appointed by Restuplicans. Oh and best of all? Chet Culver, Democratic Governor, could appoint new justices before he leaves office! Too funny Stupido King.

On his side, Tom Tancredo, who recently claims that all non-Christian immigrants should be sent packing. Now he claims that he thinks that the appropriate response to any terror attack on the US would be a bombing of Mecca and Medina. This has been repudiated, (that would be refutiated Sarah if someone is reading this to you) by nearly everyone. He also favors impeachment of Obama.

Sure the GOPers are gonna win big. Most of the newly elected are fairly simple-minded and have taken advantage of a trend of anger. Once they arrive in their new offices, they will be TOLD the realities and nothing much will change. So note November 3, as the beginning of the teabugger disillusionment. The real GOP is already gearing up to stop Palin. If she screams loud enough, they will lose her hangers-on followers. I mean, doncha just love this?

There is one thing and one alone that I admire about Ms. Moosey. It’s here ability to remain supremely self-confident in herself. I mean if I knew that several millions of my fellow Americans thought me unfit for the job I aspired to, and moreover, superbly uninterested in learning the subject matter, well, I’d be devastated to put it mildly. How many does it take, until one might ask, perhaps I’m the one who is wrong? So far, that magic number has not arrived for our Sarah.

Leastly and lastly, but not leastly at all, but mostly, go over to Mock Paper Scissors, for an election! Ballot! Ballot! Vote Vote Vote. The 1st Macaca Awards! The nominees are all these and more!

8 thoughts on “Parade of Idiots”