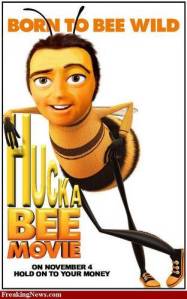 Ya know, Ole Mikey (the pudge) Huckabee has always struck me as a kinda nice guy. Not the bright light mind you, but a guy whose misguided heart is at least in the right place.

I guess I’m not thinkin’ that so much any more.

Mikey, it seems feels that he was badly treated by GOP “elites.” I’m not sure exactly who he would stick in that category, but I imagine some of the old guard–the McConnells, the Boehners and the McCains. Sad little men who try valiantly to jump on the Tea Party bandwagon, but for all the world can’t keep the smirking “don’t touch me you goats!” kinda look off their faces as they glad hand the “folks.”

I shouldn’t wonder that Mikey was sort of looked upon as a country parson come a courtin’ the town beauty. After all, the man does refudiate 🙂 evolution and all. That does tend to tell the intellectual elite of any party or group that they are dealing with a personage of the tenth level of IDIOCY.

That may be why Mikey decided to be critical of those GOPer elites who have been snickering about Christine O’Donnell and her creationist/no masturbatory policy/where is that separation of church and state in the Constitution, candidacy in Delaware. And while snickering, being fairly pissed since it probably cost them any real chance at taking the Senate.

Mikey identifies with Christine I guess. Though truth is he has probably got about 40 IQ points on her.

Then Mikey went and jumped on the old white men’s bandwagon of support for the new “liberal” Juan Williams, so rudely treated by NPR. I mean, it took them no time to get out the talking points did it? All in lockstep. How dare you raise a leg on our resident “boy?”

Apparently Mikey is still of the opinion that his chances in 2012 exist. And thus we have all this tighty-whitey “I’m one of y’all,” simpatico crap with teabuggery.

Sarah Posner has a nice piece on The Pudge, and it turns out he’s not your usual “I’ll be anything you need me to be” kinda candidate. He may actually believe the bilge he utters.  He’s  in bed and has been with American Family Association, one of the most rabid anti-gay hate groups around. Read it! (This organization is behind robo calls in Michigan against gay candidates, and also the recall of judges movement in Iowa) Don’t look now Mikey, but your homophobia is showing!

AlterNet has a really comprehensive article (reprint) on the entire Tea Party phenomenon. Tracking the money and the players and how they co-opt the real anger of the average joe and turn it not only to their own advantage, but to the disadvantage ultimately of that same unsuspecting average joe.

There is an interesting article at the NY Magazine that you should probably take a look at. It’s written by John Heilemann and he was talking about it last night I believe on Chris Matthew’s Hardball. I don’t buy his premise mind you–it involves how not only could Sarah run, but how she might win. It involves an unlikely scenario involving Bloomberg. While Bloomberg is an interesting thought, I think he is wildly too smart to get caught up in this can of worms. But read it and make your own assessment. Sarah it seems is destined to be with us in 2012 in some form or another. It’s best we think through all the possibilities. A breathtakingly unqualified person such as this is dangerous and we best remember that.

Resident wacko-nut Steven King (R-IA) is on the hate tour bus run by NOM, touring Iowa to stir up the voters to vote out our three justices up for re-election. They mustered  the humongous number of 42 who came to hear King vomit his homophobic sludge. So reports Joe.My.God.

Sven and Olga lived in Mina-SOOO-TA. It was winter and exceedingly cold, the wood stove burned low in the long night, and the two cuddled in the bed. The phone rang. Sven got up and answered. Olga heard presently a shouted remark by Sven: HOO THE HELL WOULD I KNOW?

Sven returned to bed and Olga asked him who it was. Sven mumbled something incoherent and snuggled back in. A few moments later, the phone rang again. Dutifully Sven got up and answered. Olga heard this even louder refrain: HOO THE HELL WOULD I KNOW? IT’S TWO THOUSAND MILES AWAY!

Sven again returned to bed. Olga again prodded him. “Who was that?” she asked. “Some damn fool  that wanted to know if the coast was clear,” Sven grouched.

Julie Gunlock (I swear it’s her name) writing for NRO, moans about how the media attacks Michelle Obama’s cheeseburger lunch, and then goes about the business of attacking Michelle Obama for her choice of a cheeseburger lunch. The wiggy right-wing is like that–illogical and inconsistent. She finds it just wrong and well wrong for big mama Obama to be telling the Merkican public how to eat. They are adults and can decide for themselves.  Guess she forgot about the Nancy Reagan “Just say no” campaign. I’m sure Julie would find some point of difference. Oh yeah, one is a Democrat and the other a GOPer. Yeah that’s it. Um….do you think there MIGHT be an important issue to waste your ink on there lady?

6 thoughts on “Weird, But no I before E Except After C”