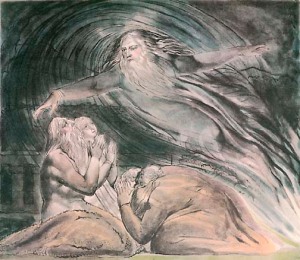 I love the book of Job more than any I think in the Hebrew Testament, but I’ve always thought the writer was quite wrong in his idea that God would do such a thing to a human just to make a point with the Deceiver.

That said, I certainly have always been able to see Job’s point of view. Through no apparent fault of his own, he found himself mired in one disaster after another. They just kept coming.

I know that feeling well. They say that crap happens in threes, and I guess depending on how you count, that is true.

Let me tell you about it.

As I may have mentioned, we awoke one morning to find the rear window of the Bronco inexplicably shattered. No known reason. When weather appeared to allow, the Contrarian dutifully made the trip to the glass repair shop. Of course no appropriate window was in stock and he was advised to return in a couple of days.

This was followed the following afternoon with a call. The window had arrived–broken. Another was being ordered, a new appointment was made. By now, we were down to crackers and stale bread to eat, so I left camp (home) with the Contrarian and made the journey to town on Thursday.

After about forty-five minutes in the glass hospital, “a problem” was noted. Some steel rod which did something, had for no good reason rusted out of its holding place and blocked the insertion of a new glass. This had to be removed. The glass doctor had no such tool.

We went to True Value and rented a thingamajig which cuts padlocks and such. It barely dented this superhuman steel rod. Home we went for the saws-all. One lonely blade run smooth, and the Contrarian was heading back into the city for more blades.

He stopped at the glass place, (their phone number linking directly to their national office, which hadn’t a hoot of knowledge of what we were doing) and made a new appointment for Friday. I remained home, and decided to go online, except I couldn’t. All I could get was a “We’re sorry, your call cannot be completed as dialed. Please hang up, and. . . .”

The Contrarian returned and finally cut the bar, and we were set. I notified him that the wrong number crap was continuing and I finally called ATT. What followed is the usual arrogant bunk that passes for tech help at ATT.

It was our fault. They kept asking what the error message was. No amount of explaining that we weren’t getting one would stop them from insisting that we were getting one, invisible though it must be. They copied our information and called from India, and then second level techs (didn’t know they had that did ya?) did the same from California. Supervisors and super techs assured us that they had NO trouble accessing our access server number and getting on line.

The trouble was ours, either a bad modem, or a faulty telephone line.

Friday, I took over. I returned and finally got a window installed. I went and purchased a new modem. I got the groceries. I returned home.

The Contrarian immediately set to work installing the modem. A few curse words, and some time later, he admitted defeat. Still the same silly recorded message.

We contacted our telephone company. They checked the line. It was fine. They of course signed us up for their Internet service, and told us we would be online by Saturday noon. When I called to inquire about e-mail matters, I learned that such was a lie. We wouldn’t be back online before 5pm AT THE EARLIEST.

We in fact didn’t get back on until Sunday at 6 pm. Everything works fine. I have the new e-mail account set up and have changed my e-mail in all the appropriate places. I’ve imported my address book. I’m ready to go, with a few minor things still to attend to.

It has been a chore, and a misery. I’ve listened to more MUZAK than a human should have to endure and still maintain sanity. I’ve argued, cajoled, and torn out huge chunks of hair at the incompetence and insouciance of so called “experts.”

I have asked God, “why me?” So far, he hasn’t answered. He just continues to show me pictures of folks in Pakistan, the Gulf Coast, Moscow and Afghanistan where people are dying. I think he’s trying to tell me something.

I know better than to argue. Job  was pretty ashamed when he tried to go toe-to-toe with the Creator.

Still, I’d like to sit down with Job and commiserate. It helps to have a pity party. Now that I’ve unloaded on you, I do feel better.

*****And my new e-mail for those who need or want it is: troyspeyton@iowatelecom.net.

2 thoughts on “Me and Job are Best Buds”