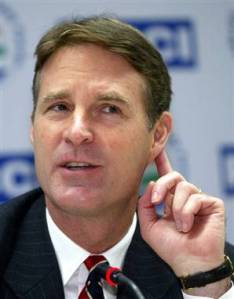 I’m surely not the only one who finds Evan Bayh a pale comparison to the giant many of us consider his father, Birch.  Well, Ragebot, has done a lovely satirical piece on the retiring Senator from Indiana. Or is he? Go and take a gander at this quite amusing little post.

And guess what? It turns out that Evan’s wealthy wife, Susan, sits on the Board of Wellpoint, the parent company of Anthem Blue Cross. You remember them? They were planning a 39% rate hike for their existing members in California.

I guess we see why Evan has been so vehement in his refusal to consider anything meaningful when it comes to health care reform. Not gonna mess up that golden egg are we Evan? As I said, your father must be appalled.

Everyone in the world knows that America is nuts. After all, we are the home of swallowing goldfish, stuffing phone booths with people, food eating contests, Evel Kneivel, and Dog, the Bounty Hunter, and his fashionista wife. Need I say more?

Well, the Brits can give us a run for our money it seems. That should be clear anyway. Ever get a look at  what passes for royal fashion at Buckingham Palace? Enough said.

The silly Brits have a thing called the Diagram Award, and it features the best and silliest of book titles they can find. Past winners have been Bombproofing your Horse and Living with Crazy Buttocks.

Do stop by and see the finalists for this year. What can I say? I guess I have too much time on my hands again.

I’ve never been much of a fan of Arnold. I tend to be skeptical of actors entering politics. No doubt I’ve said an unkind word about the Terminator now and then.

But utter kudos are in order. Appearing on This Week, George Stephanopolous’s old gig, with Governor Rendell of PA, Arnold was willing to call it down the middle.

He condemned his own party for decrying the merits of the Stimulus package, all the while posing at home for photos with the big check, taking credit for bring money home. He also acknowledged that Republicans were in fact the “party of no” and it was time for ideas and compromise.

Colin Powell also echoed the call for compromise, calling on both parties to stop the bickering and start working for the American public.

I found it refreshing that Schwartzenegger was willing to put his state first and not merely echo the usual Rethug talking lies. Maybe we are seeing a few cracks in the monolithic GOP propaganda machine.

Okay, so we like Ugly Betty and Hollywood’s rendition of the fashion world, but to us sane folks, most of the crap worn on the runway is fit for either a Halloween costume or the grand finale of the Barnum and Bailey’s Circus.

I guess it stands to reason that each season, some attempt is made to “outdo” last year. Being more outrageous (ever seen the stilts Lady GaGa has tripped around on?), seems to be the key to wowing them in the aisles.

Anyway, Isabel Mastache, (we hope she is not an American. . . .as I said, our cup runneth over with weirdos already), offered us “penis pants.” in her new spring collection. There is a video attached so link up and go see for yourself.

One would be tempted to say, what next? but I rather think that we can’t fathom the possibilities. But what do I know? I after all, shop mostly at the Goodwill a hotbed of sweat pants and t-shirt fashion. 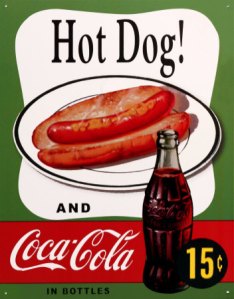 Is nothing sacrosanct? I mean really! Okay, its a serious subject. Choking is no laughing matter. People die from choking, but this?

It seems that doctors, some at least, think that hot dogs are the worst offender to young children. They also add in grapes and popcorn.  I mean how more American can one get than a hot dog? It’s more American than apple pie and mom right?

Yes, I can see that these items could be dangerous. But heck, should you not allow your children to ride their bikes down the sidewalk because somebody might suffer a stroke and go careening over the curb and run down your offspring?

These overly cautious ones want the hot dog redesigned, whatever that might mean. I guess we can redesign the Dachshund while we are at it. And what about the poor hot dog bun? What is he supposed to be used for now? A pen holder?

It’s beginning to look a lot like Toyota has got its tit in a wringer, or is up a chit creek without a paddle, which ever works for ya.

I’m not sure the Japanese automaker will be surviving this endless parade of its failure to build safe vehicles. Today I saw a feature where a man has been imprisoned for some years on a manslaughter conviction, all from an accident he claims was caused by an accelerator that would not release.

I’m wondering if Japan sells Toyotas to Japanese folk at home. While there are plenty of reasons why Asians have some axes to grind against America, callously ignoring the safety of innocents seems a lousy way to redress grievances. It’s impossible to believe that the average Japanese is so unfeeling, so we can only conclude that Japanese business leaders go to the same ethics lacking schools as Americans do.

Enough of all this drivel. You must have important things to do. Get on with them, and I’ll see ya tomorrow with who knows what. I never do.