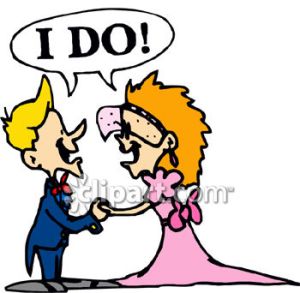 My grey matter works in mysterious ways. This topic has been on my mind off and on for years. It is not momentous, yet it nags at me now and then, for no other reason than that I cannot decipher the thinking behind some of the choices.

Let me explain. And before I do, let me just say, that I have no opinion as to what is proper, good, normal, or rational as to one’s choice. I simply find some of the choices obvious  and others fairly not an option from my standpoint, and I wonder at the thinking behind the choice. Wonder only, not judge or condemn in any way.

That said, I wish to discuss the manner of naming ourselves in marriage. When I grew up in the 50’s and 60’s of the previous century (read way long ago time), it was more than the norm, it was the only really known means of marriage. A woman dropped her “maiden” name, and acquired her husbands last name in marriage. “Maiden” signified unwed. Thus Susie Brown became in a flash Susie Snicklegruber, whether she liked it or not.

As marriage began to break down, and more and more couples parted company, a problem ensued. During my time, a divorced woman, no matter how long divorced was still referred to as Mrs. Snicklegruber. She had, apparently the honor of notifying the world that she had at least once obtained the golden ring of matrimony. (Given that era, this was the highest attainment most women could expect and old maids were both pitied and looked upon with a certain suspicion.)

As divorce became more common, and especially as many women remarried, an issue arose. Should the second husband’s name be taken to replace the first husband’s. What if there were small children of the woman’s?

This all coincided with the women’s movement and the desire to embrace “ourselves” as complete and whole without recourse to a man to give us identity. This meant that some “modern” women no longer desired to take on the man’s surname. Or, they innovated with the often thought “snooty upper class” practice of hyphenated names. So Susie and her husband Carl became Mr. and Mrs. Carl Brown-Snicklegruber.

Perhaps some solved it in part by the woman retaining her maiden name, the husband of course retaining his, and the children getting the hyphenated name.And then as I said, some women retained the name of their first husband so as not to make the kids feel weird with the odd name.

Today, we find that many women retain their maiden names as a matter of course. Many do not. I’m not sure, but I suspect that the latter still prevails across most of the land. Certain areas  of the land, no doubt weigh the issue differently.

So, I’m not sure why people make the choices they make. For me it was simple, I disliked my last name and was happy to acquire a simpler neater name. I was tired of having to spell it out in it’s entirety, only to have some hapless form filler outer remark, “ah, it spells just like it sounds.” Yeah well, yeah, but nobody says that until I have had to spell it out.

So it was a no brainer for me. And in a manner I recognize why some women choose not to “for women’s rights” reasons. And I get the not changing it for “the kids” reason.

Still, I am troubled by why women would keep names of men whom they no longer love, and with whom they often had a very acrimonious parting. Who wants to be reminded of unhappy memories for the rest of one’s life? Children can be talked to, and they grow up and move away from home eventually. So I figure I’m missing some reasons here.

Worse yet is the woman without children who becomes divorced and keeps the husband’s name. This one really puzzles me. Again, why be reminded every time you sign a check that your marriage was a failure? Why do you not reclaim your maiden name? I’d really like to understand this decision.

Perhaps that last because my husband’s former wife who lives in Troy, chose after barely four years of marriage, some of which was spent separated, to keep my husband’s name. This is so small a town it is not incorporated and everyone knows everything. She could not have assumed that somehow she would gain some advantage in the town by being a Peyton. Everyone knows her short history, and much longer one of being the wife of three other men previously. I’d be schizophrenic if I changed my name that many times in a life  time.

I have never come to a satisfactory answer, and so I ask if there is something I am missing about taxes or whatever that makes this make sense. It doesn’t to me. It seems, as far as I recall, a part of the divorce decree that a statement is included about name. So it seems fairly simple to revert to one’s maiden name.

Just what I was pondering the other day again, and I thought I’d ask your opinion.  Pardon me but the temperature outside is just barely this side of frozen tundra from hell, so my brain case is cranky. Maybe I’ve missing something.