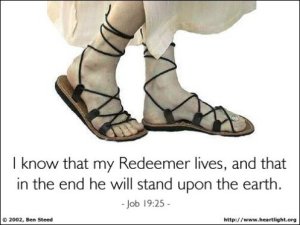 When God insists, I acquiesce. Either that, or God hounds me until I do. So it makes a lot of sense to give in immediately.

Such happened this morning as I prepared for my facilitating of the last of Job and Mark in the lectionary for tomorrow.

In reading a homiletical treatment of Job, I discovered something I had not realized: namely that Job became something of a radical after his transforming experience with God.

For those of you who don’t recall, I refer you to chapter 42:13-15. God has given all back to Job and more, blessing him with sons and daughters. The daughters are uncharacteristically named and in verse 15, they are given inheritance rights “like their brothers.”

I’ve never caught this before. That Job became radicalized by his encounter, giving to his daughters what was not common in those days, perhaps mostly unheard of, the right to inherit like the boys. They are raised from their lowly status as female and given a certain equality.

For those who think that the closing epilogue of Job serves to resurrect the cause and effect of retributive justice again, you are most certainly wrong. God upholds in fact Job’s protest against it both to his friends and God himself. Job is transformed by his personal encounter, realizing that this God of whom he once had  learned,  he now sees directly as participating at least in his misery.

And Job sees, perhaps as a shocking aha moment, that it is humans who must do the work of justice, rather than leave it to God. And so he does so in his new life after sorrow.

One of the dumbest most absurd explanations I have ever heard is from a bible thumping woman who claimed that global warming was a hoax perpetuated by “money and power” interests. We shall ignore the stupidity of failing to see that the oil cartel and various other industries who pollute with abandon, also are money and power interests who have a vested interest in not changing laws that would cut into their profit margin. They are the main perpetrators of the “nothing wrong here boss” idea of climate change.

But the biblicist announced that after the Flood, when God said that he would never destroy the earth again, well that means that nothing CAN destroy the earth, including silly notions of man-made behavior that destroys the ecosystem, making the planet uninhabitable for humans and most other life.

This refers to Gen 8:22, wherein God says: As long as the earth endures: seed-time and harvest, cold and heat, summer and winter, day and night will never cease. (We’ll skip too the relative nature of this statement. Winters of no freezing and summers of drought and 90’s is a season, it just may not be a nice one.) What is essential to read here is that this is preceded by God stating that never again will HE act to destroy. He makes no mention of others acting or failing to act to protect the earth.

Additionally and most importantly, it is clear throughout Genesis that God places man as his steward upon the land to care for it and all it contains. We are to act as God’s regents in the world. Time and time again, God reminds us of this. If God’s creation is good as he announced, than our stewardship must include protecting it against harm, especially harm caused by our own actions in “subduing” and bringing under our authority the earth itself.

A friend of mine has a “green” bible, wherein the text is in green whenever there is mention of environmentally favorable wording. Job seems full of such greening. God again and again speaks lovingly of his creation.

It is the height of stupidity and worse yet arrogance, to stand by and “let God” take care of it. God has made it clear that we, as his regents, have responsibilities too. We are not as it were “potted plants” to sit and consume and abuse the world, confident that daddy will clean up after us. That is sheer absurdity and mocks the very God we praise.

I had often thought of the Hebrew Scriptures as the history of a people’s walk with their God. As such, it is instructive on many levels, yet I never thought of it as a particularly radicalized document. No doubt, as we learn from Job’s “friends” it is not. They were assured that old and well-worn beliefs in retributive justice were at work. They continued to prod Job about his “sins.” They were echoing the beliefs of their time and of their history.

Yet, if we look closely, we can see, that even then, the amazing encounters between creature and Creator often led to  new radicalized views of the world and how life is to be conducted. Who would not argue for instance that Lamech’s overkill (no pun intended) at a small slight was significantly changed by the eye for eye doctrine, bringing retribution at least into some sort of equality with the gravity of the offense?

This of course, all would come as a great shock to the sola scriptura folks who never read ALL the bible in equality, but pick and choose in the most ugly cafeteria style, those verses that support their own particular needed worldview and reject or “forget” all the verses that speak to a new way of seeing and a new way of relating.

Don’t get me started on Mark’s treatment of Bartimaeus in the New Testament. Perhaps I’ll chew on that tomorrow. It calls to shame the bible thumpers who consistently find reasons why we don’t need to address social needs of the poor on a national scale. Jesus was the most radical of all, and yet they seem to have hardly known him. They are more like disciples than they realize.

4 thoughts on “The Radical Old Testament”