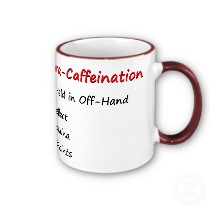 “Boy, you sure made the coffee strong this morning, dear.” This as I yawn and peer through lidded eyes at GMA. “I don’t know that it’s any different that usual,” the great one replies.

“Well it was falling out of the grinder when I lifted off the top, so I knew it was gonna be strong,” smiling weakly. I saw a look of “oops” fall across his face. “Ummm, perhaps that was mine.” Mine being the caffeinated stuff, which I have long since abandoned as making me too wired, and upsetting my delicate digestive mechanism.

An hour later, I have completed my walk in record time, and am deeply ensconced in Genesis, trying to see the myriad differences between creation story one and creation story two. My mind is flying, reeling really among the possibilities, and now, I’m really not sure at all what “made in the image of” means.

I have the urge to write, yet know, I’m not nearly ready to tackle THAT topic. I start in the Google reader, skimming the stories, vaguely aware that I am looking for a few in particular, stories I want to consider. I make the mistake to visit Randal’s L’ennui melodieux. Not knowing French, I still have no idea what that means, though the word l-ennui is vaguely familiar. In any case, I don’t recommend that site when in a full-blown caffeine mania. I actually understood his post “Naked in front of the Computer.”

You see, I almost never understand Randal’s posts, which takes nothing away from the fact that mostly they are brilliant. He is writing as art personified. Like Justice Black, I can’t define it, but I know it when I see it.

With that post, I realized that my mind, going off in several directions at the same time, could not focus on one issue long enough to write a post about. Thus you get the hodgepodge of trivial and snappy snapshots of reality. At least my reality. The human brain is exceptional in it’s ability to hold, simultaneously, several thoughts at once, some of them in direct and obvious logical opposition (witness the fundamentalist mind –if you can call it that–which is required to do that 24/7–but no we are NOT going there again. I’m looking for a treatment for THAT addiction as well.)

Moving right along, switching gears, about facing, and other metaphors that come to mind. I always obsess happily about our utterly infamous and undoubted resident wing nut Stephen King, R-IA, (may God forgive us our sins). He is always good for a profoundly stupid remark. Yesterday he was quoted as saying that the best vote he ever made in the House was his nearly singular opposition to Katrina aid. Imagine that. Today he is quoted as saying that gays marriage is a “purely socialist concept.” No even, I with my high-speed brain cells this morning, don’t care to get into the ugly morass of a mind that could concoct such bull-crap. Be my guest. Read more here.

Meanwhile, spinning on a dime, and managing quite well, thank you, not to fall. . . over, I present a recipe. This time of year one’s thoughts turn to slow cookers and comfort food, and this is definitely that.

One can imagine doing all sorts of outdoorsy things, like planting fall mums, raking leaves, (yeah right) and coming inside for cocoa (yeah right) and taking in the wafts of yummy meaty goodness slowly melding together in the crock pot.

If such thoughts are yours too, and no doubt they are, then let your fingers do the walking over to Baking Delights and pick up the recipe for Slow Cooker Red Cabbage and Sausage.

With all due and I do mean due, respect to our tinfoily friends on the extreeeemmmme right, one of their oft cited, but never explained objections to gay marriage is that it will “destroy the sanctity of marriage.”

Well, yes, but, exactly what do that mean Mable? Nothing much it seems, but dang it sounds good. Words can, it seems, be put together in nice sounding ways that appear to point to deep thought, when in fact they bespeak no sense at all.

In other words, ya can’t destroy what don’t exist! And according to recent statistics,Die vorce is alive and well and on the climb and not, repeat NOT in the states that allow same sexers to marry.

Of deeper concern, since I live here, is a recent poll, (saw it I swear but have dumped the site already) in Iowa, that showed that something like 92% of Iowans don’t feel,  so far, threatened in their marriage because of Iowa’s new marriage decree that allows same sex wedding bliss. I can testify as well, that so far, I’ve not been hounded by lesbians wanted to “hook up” nor has the Contrarian been solicited by hoards of men wanting to cuddle behind the tractor. Nope, hasn’t happened. Course this will do nothing to stem the gasps and horror among the “bible told me so” folk.

And the winner in the category “gag me with a spoon” is. . . . Mackenzie Phillips and her revelations that “Dad and me were lovers!”

Now, it’s hard to know who to blame for all this. I’m inclined to blame the druggin’, which I understand was beyond the pale, over and above, topped out, even the Stones can’t come close to these folks in over indulgence.

The Contrarian recalls reading where Cass showed up in the Caribbean somewhere with a quart jar of acid one vacation time. These are seriously f**ked up people.

One could of course simply blame dad for all this, but really, Mack admits she was nineteen, yes you heard that right, at the time of the first incestuous meeting, and AND it continued for a record ELEVEN years. I’d say she is somewhat complicit? This doesn’t make any of it other than sordid, wrong, abusive, and a host of other things, but lordly, it sure taints any desire to hear “California Dreamin’ ” any time soon don’t it?

Yeah, I know, you wish I would go on and never stop, but hey, I can’t feed your addiction all day long ya know. I hear one of the big pharmaceutical companies, Pfizer perhaps is working on a drug to wean ya off me. If I can get a cut of the that action, I’ll gladly add my opposition to the Democratic health care reform movement. Greed does trump the common good. I can be bought! But you knew that already. Blessings, and well, I’m off to rain caffeine craziness upon the rest of my household.

4 thoughts on “It’s the Caffeination, Stupid!”