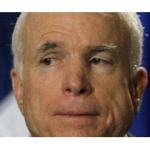 Girls and Guys, if this is legit, oh it should chill you to the bone. It’s the kind of remark that killed Gerald Ford. Remember when he got screwed up over Poland? Well, this is as bad if not worse. You can read the entire section of the interview, in either Spanish or English, or listen to it. It is deeply scary and troubling.

The upshot is that while being interviewed by a Spanish media person, McCain was asked about Spain, specifically and then asked whether he would meet with Prime Minister Zapatero at the White House should he be elected.

McCain in total confusion talked about friends and allies and enemies and kept referring to Latin America and Mexico. The reporter tried to rein him back to Spain and Zapatero and he couldn’t seem to figure out what he was talking about, and kept hedging. It is simply awful. He apparently had no clue who Zapatero was, and could not place him in Spain and could not place Spain in Europe. Apparently five months earlier he said he would be happy to meet with Zapatero. Now he has to vet him first to determine whether he has the “right principles.”

So any more questions about McCain’s foreign policy experience? Oh lord, I cannot wait for Olbermann and Maddow tonight. This is huge.

MSNBC has a written transcript here.

The interview was done in Miami. Anyone with any knowledge of Hispanics would assume that a Miami reporter would likely be talking about Spain in the first place. The Miami Latino is most likely to associate himself with Spain and not Mexico or Latin America which they view as “indians.” I’m thinking at best, McCain can kiss any hope of the Hispanic vote as gone.

It is so clear after reading the transcript that he had no clue that Zapetero was from Spain, and even though the interviewer referred several times to Spain, he could not connect the two at all. This is unthinkable and unforgiveable in someone who claims he can run this country.

I’m not a person who enjoys being proven wrong. Especially when one is married to a man who seemingly never is. The Contrarian’s favorite statement is “I thought I was wrong once about something, but I found out I was wrong.” So you can see what I am up against.

I’m not good at predictions either. So, those of you who read regularly, might notice that I don’t often make serious ones. I tend to hedge my bets a good deal. That makes me a not very good gambler. I have no interest in giving away money at casinos. I don’t find it “fun.” I play a mean game of poker, but that is because that is not exclusively a game of chance, but is a real game of skill. It’s mostly about math and psychology. Master the two of them, and you can be successful.  Readers should note that I played online for about two years and turned a $50 investment into a few hundred dollars worth of withdrawls.

That all being said, I think something is in the works here. And I’m prepared to step out on a limb, though I admit, I do so with fingers crossed, and a prayer sent heavenward. (No I don’t think God takes sides, but I do think he nudges us who are aware of his presence in the right direction.)

Colin Powell is arguably one of the most respected persons in America. I might be inclined to go further, but for the mess in Iraq. That was not his finest moment, as he perhaps too willingly accepted “proof” about WMD’s that was suspect to say the least. It is clear he was not for this war, and he counseled against it. We must remember however that Mr. Powell is a product of a long career in unformed service to his country. Being loyal is prized in all warriors. It’s no doubt hard to overcome that.

I do feel that he did believe what he was told, however much he very much wanted to in the first place. I do think he felt betrayed by the lies that were told him. He did the honorable thing and resigned as Secretary of State. There are those who no doubt feel that he let the country down by not blowing the whistle on a corrupt and lying administration. However, there seem to have been more than enough whistle blowers around for that anyway.

All that being said, I think General Powell retains for the most part the respect of most Americans. And that is power indeed. Up until now, Powell has not given his public blessing to either candidate. But, if one reads between the lines, I think it is fair to believe that ultimately he will give his nod to Obama.

Just the other day at a George Washington University, on a panel with other former Secretaries of State, he said thatObama’s election would be “electrifying.”  He also exhibited displeasure at the deflection of serious issues by “lipstick on a pig” talk. Still he refuses to make a formal declaration. Those close to him say that he has known McCain for years and wishes to endorse him but so far “cannot find a good reason to.”

What I think is going on here, is that indeed Mr. Powell has made up his mind. But he is a shrewd politician, and knows that his announcement will be very important, though less to McCain should he go in that direction. It will be a bombshell of sorts should he endorse Obama, although Fox Faux News  will imply the obvious “lookalike” of the two.

Thus I see General Powell waiting for his endorsement to have the maximum effect. I predict he will endorse Obama, precisely at the point that he thinks it will most influence the vote. And that may be late in October. He will then have the basis of the debates having been completed and can assure everyone that this was the tipping point for him.

Does Obama know? Quite possibly he does, wink, wink, nod, nod, but I suspect if he does, there are but two people who do, he and the General. Perhaps Michelle has been advised, but I don’t think that even Obama’s advisers have been privileged to be informed. Leaks of course are simply prevalent in all politics that any hint would spread like wildfire and spoil the entire effect.

Do I have any information or insider knowledge about any of this? Nope, nary a word. It just seems that Powell’s reticence, coupled with his restated claims that he is “going to do what is best for the country,” reinforce the idea that he indeed has made up his mind and is waiting for the best moment to announce. It is the perfect revenge against an administration who lied to him, and used him and his gravitas to their advantage.

Yet I don’t think that Powell is made that way. I don’t for a minute think this is a calculated political choice on his part to do as much damage to Republicans as possible. It will be portrayed that way no doubt. I do think this method of waiting to make the greatest impact is motivated by his desire to reclaim his honor to it’s fullest degree. That is of course expected in a politician, but as we know from McCain, honor is something held dear to military people, more so than life to many.

Powell has every right to remove the tarnish his honor has acquired. I agree, that perhaps, he was somewhat responsible for its loss. But surely, much of it was done to him. He need not have regrets about what he does to McCain. McCain has probably done most everything that persuades Powell that Obama should be the choice. McCain has sacrificed his own soul and honor already. It must be clear to Powell that McCain has forfeited country for self. When a person has sold themselves to the devil, nothing Powell does at this point can hurt him more. The General can only state the obvious.

So remember this little post and you can either congratulate me or laugh at my stupidity in a few weeks. We shall see. The human spirit, I find, has an incredible ability to continue to hope for better tomorrows. I do. I hope that Mr. Powell does not let me down or America, or the world.